It’s been a while since I’ve done one of these posts. There has been construction happening here and there around town, and I’ve been driving by but not stopping to take pictures. But it’s always interesting to go back after these things are built and look at the photos from when they were half done. So it’s good to drive around town and check up on what new stuff has been coming together. The prevailing theme this time seems to be that there is a lot of new residential being built, and a lot of open space being plowed under.

One of the most interesting developments is also one of the ones that’s been on our radar for the longest. It was the year 2006, 16 years ago, when it was announced that the Lompa Ranch had been sold to developers. The Lompa Ranch was one of Carson City’s last remaining cattle ranches. It was located along Saliman and Fifth Streets, bounded by the freeway to the east and Carson High to the north. When you look at it on a satellite photo, you can see that it’s quite large. 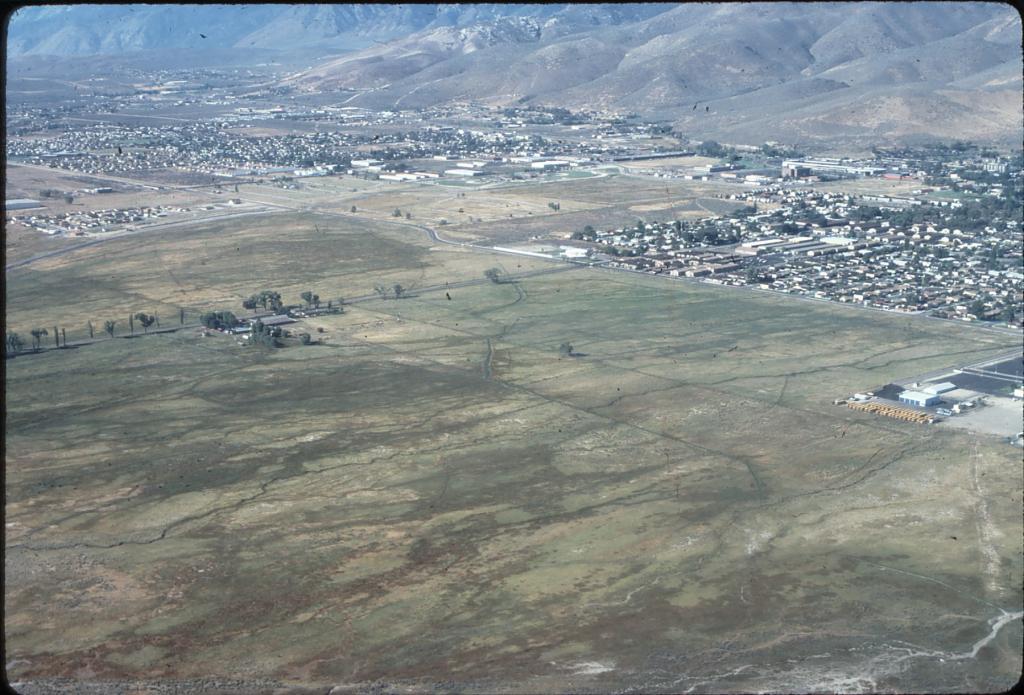 An aerial photo of the ranch from 1984. Before the freeway, and even before anything was built south of Fifth Street.

It was about 400 acres total that was sold in 2006, all of the empty space in the photo above. At the time we thought that it would be built on quickly. 2006 was the height of the housing bubble and it seemed like anything that was built there would sell quickly. But planning and permitting takes some time, and during that process the housing market crashed, and suddenly nobody had any interest in building new housing in Carson City. So the Lompa Ranch sat, undeveloped, for over a decade. We started to wonder if they would ever follow through on the plans. Here and there I would get tidbits that the wheels were still in motion, that something would happen on the land eventually. The land was being subdivided, and plans were formulating for parts of it to be single family housing, parts of it to be apartments, and other plans for retail and office space. But so much time passed with nothing happening. In the mid 2010s the housing market started to recover, and a groundbreaking took place, just south of the high school. But even that was minor. Some earthmovers went to work along Robinson Street, and moved dirt around, but nothing really took shape from that work. Just a mound of dirt.

But recently, things finally started coming together. The earthmovers moved in for real. Shapes were formed in the fields, and recognizable streets started appearing. Underground utilities were put in, followed by sidewalks and paved roads. And now, even though it’s only a small percentage of the available space, a new housing development is finally coming together on the Lompa Ranch.

Another ranch is being plowed under for a housing development, though this one is more recent. This one hasn’t been in the works quite as long as the Lompa Ranch, though as you’ll see later, it has been planned for a very long time. The Andersen Ranch is on the west side of town. It stretches between Mountain Street and Ormsby Blvd, and is sandwiched between housing developments that have been in place for decades.

The neighborhoods to the north and south were built in the 70s and 80s, but the ranch in between never got built out and remained a working cattle ranch. And that’s how the residents liked it. They got used to having empty space there and didn’t want that missing piece to be built. But just like the Lompa Ranch, it was inevitable that this land would be developed. The residents fought against it and tried to keep the land as open space, but to no avail. The rising housing market made the land too valuable. It took several years of fighting and negotiation, multiple revisions to the plan, and COVID delays, but in 2022 the bulldozers finally came in and started tearing up the ranchland.

There are little empty lots all over town, and a lot of them are getting filled in this year. This empty lot along Little Lane had been surrounded by development on all sides, but was never built on itself. The Arbor Villas townhouses were built on the west part of the lot a few years ago, but the rest had stayed empty until now.

This neighborhood is called the Homes at Little Lane. The lots are smaller here, so the houses are skinnier and more vertical. But they’re still priced the same, starting in the low $500,000s. They’re building them at a fast clip. Quite a few are finished already, and there are several others in various stages of completion.

Right next door, the first phase of Arbor Villas has been finished for a couple of years. But now they are working on the second phase, located behind the others.

And right across the street on Little Lane is another empty lot, where they’ve announced more apartments to be built. Named The Marlette Apartments, construction hasn’t started yet but is expected soon. This is directly behind the post office.

This one also has a long history. In 2017, longtime Carson City restaurant Grandma Hattie’s closed for good. The building stayed empty for a year, and I did a Ghosts of Carson article on it. In 2018 it was announced that the building and land was bought by the Lucky Strike Casino, a small casino located in the shopping center at William and Stewart. They were looking to expand and were interested in remodeling Grandma Hattie’s to meet their needs. But for a long time after the purchase nothing happened. Eventually, the Grandma Hattie’s building was torn down, but then the land stayed empty for another long while. It wasn’t clear if the casino project had fallen through, or if it was just delayed.

Last year construction finally started on the site. It was confirmed that it was the Lucky Strike Casino project, come back to life after a few years of dormancy. Construction has been going quickly for several months now. The outside of the structure seems to be finished now, though they still have a lot of work to do on the parking lot and landscaping. It’s expected to open this summer.

Another small empty lot is being filled with townhouses. This one is located at the northwest corner of Clearview and Silver Sage. These are called the Silver View Townhomes and there are supposed to be 34 units built.

In 2017 Q’s BBQ in the Silver City Mall closed due to a kitchen fire. They never reopened. The building has been sitting empty all this time. Until recently. Last year remodeling started, and signs went up for Carson City Pediatric Dentistry. I had hoped this would reopen as another restaurant one day, but this is better than seeing the building sit empty forever.

On this one, construction is already finished and the grand opening was held last week. Grocery Outlet has moved from their longtime home on Carson Street to the Plaza 50 shopping center on William Street. This building used to house the Warehouse Market and Scolari’s supermarkets. The last tenant was Sak N Save, which closed in 2010. It sat empty for a while (another Ghosts of Carson), and then in 2014 it was remodeled and split into two storefronts. The other storefront has been occupied by the 99 Cent Only store for several years, but this storefront has sat empty. Late last year they started prepping it for a new tenant, and Grocery Outlet announced that they would be moving in.

This large barn structure has been coming together at 405 N. Roop, at the corner of Roop and Telegraph. It’s hard to say what it’s going to be used for; this one will be interesting to keep an eye on. The house next door is historic, so it’s good to see it being preserved.