Yeah, I know things have been a little quiet around here lately. I wish I could say that it’s because I’m working on all kinds of cool stuff for the site behind the scenes, and I’m so up to my nose in code that I haven’t been able to write. But really it’s just because my wife and I have been working and shopping too much, and a little writers block has crept in, and I’ve just been staying away from the site all together. Not really the best way to build a fledgling site, I know.

And I haven’t been seeing a whole lot of really interesting stuff happening around town lately. There are Christmas light displays popping up all over the place, and I need to get out one night and take pictures of all of them. There have been a couple of things mentioned in the newspaper (like the trees on Fifth Street that are being torn out because of work on the new freeway), but I don’t like just parroting stories from the Nevada Appeal unless I have my own angle or a picture to add to them. So the last couple of weeks haven’t been giving me a lot to write about. I know there is plenty of cool stuff happening out there, though, and that’s why I do need to bury myself up to my nose in code soon and set up this site so that all of you (yes, all three of you) can add your own articles to the front page. We did get two photos added by a reader last week, so that’s great. But it’s the stories that are really important to the site, and I don’t want my voice to be the only one coming from these pages.

One thing I did spot going on in town this week is the continuing construction happening behind the Casino Fandango. They bought all that land on the other side of Curry Street, and they’ve been busy installing light poles and turning it all into a parking lot. Eventually that’s where their hotel will sit. And just this week they finally closed Curry Street to regrade and repave it. 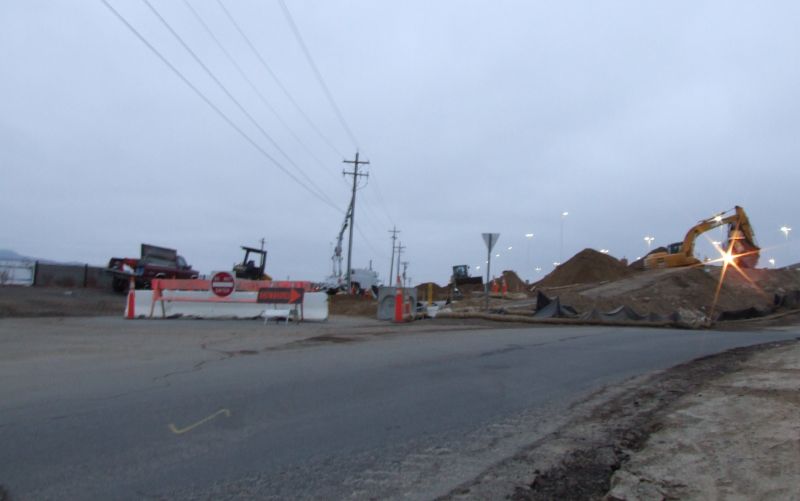 This stretch of Curry Street, between Voltaire Canyon Road and Clearview Dr, used to be just dirt, rutted and bumpy and not suited for commuting. Then a few years ago they took some grindings from another road project and “paved” the street. It was rough, but it was passable. It was redone recently to be a little smoother, but the road still followed the contour of the hillside with a few dips and wild curves. But now, with the Fandango parking garage opening soon and the new parking lot open, it looks like they’re taking the time to turn Curry into a real street. Doesn’t affect most people, I know, but for those of us who commute on the west side to avoid traffic it’s a big thing. And it’s kind of inconvenient at the moment, since with Curry closed we have to detour all the way up to Voltaire Street and then down Overland. In fact, a lot of people were just turning around rather than following the detour signs.

But it’s just another sign of how the Casino Fandango is slowly taking over this whole part of town. Now they’re paving whole roads just to make it easier to visit the casino.