The Ormsby House is definitely becoming Carson City’s shared community joke. This time it’s a letter to the editor decrying its fate:

My wife and I absolutely love living in the Carson City/Carson Valley paradise. For some reason, however, the Ormsby House remains an “unsolved mystery.” We simply cannot comprehend a bunch of “whys” … i.e. why do the owners Al Fiegehen and Don Lehr either develop the property or dump it. It seems to me that, if you purchase a business, you want to get it open in order to derive a profit from it. Why does Carson City allow that huge piece of property to simply “sit” year after year while “life goes on” in other areas of Carson City (i.e. a beautiful Marriott Courtyard adjacent to the Fandango? It took basically a year to construct the Marriott while the Ormsby House continues to basically rot across from our legislature buildings. There must be a reason why such a huge piece of prime property and such a visible tomb that was once the Ormsby House is just sitting there gathering dust! I have a feeling that there is indeed several subplots that underlie the Ormsby situation and only a handful of politicians have the answers. It is long past time for the truth to be “outed” regarding the Ormsby joke. I can assure you its present owners, Al Fiegehen and Don Lehr, don’t run their Reno-based business, Cubix Computer Corporation in the same manner as their “investment” of the Ormsby House.

I don’t think the “politicians have the answers”. They probably want it open just as much as everyone else, because an empty building generates no tax revenue. Also, Carson City is not “allowing” it to sit empty. There isn’t jack they can do to light a fire under the owners. Especially since the city has given all their money away giving incentives to the people renovating the old Wal*Mart building. They have nothing left to give. 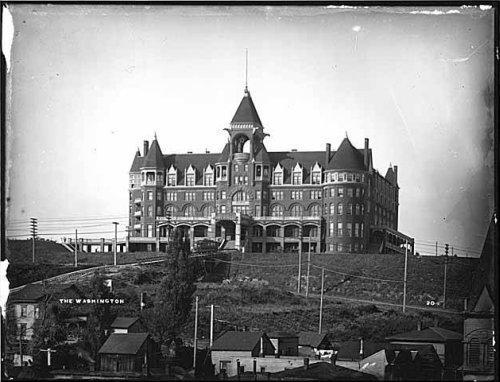 The Ormsby House is kind of starting to remind me of the Denny Hotel in Seattle. The Denny Hotel was a grand Victorian structure built right at the tip of one of Seattle’s many hills in the late 1800s. It was hit by extremely bad luck, though; as soon as the hotel was finished in 1893 Seattle went into a deep financial crisis. So the hotel never even opened its doors. For the next ten years the doors remained locked, with a single caretaker living on the premises. It wasn’t until 1903 that a new owner got it together enough to reopen the hotel. President Teddy Roosevelt was the first guest to stay there.

So will the Ormsby House turn out to be Carson City’s equivalent of the Denny Hotel? Right now we’re at seven and a half years since it closed, and there is no opening date in sight. I’d say we could hit ten years, easy, and probably more. The only question would be if we could get the President to stay in the Ormsby House as its first guest. That might be a long shot.

And whenever it does open, we better hope the Ormsby ultimately has better luck than the Denny. In the early 1900s, Seattle was in the grips of regrade fever, leveling many of their hills to create flat land for new construction. The hill that the Denny Hotel sat on, which coincidently was called Denny Hill, was one of those on the regrade list. So in 1906, just three short years after it finally opened, the Denny Hotel was torn down.