Out of all the county lines in Nevada, probably none have gotten more press than the Carson-Douglas county line in the neighborhood of Fuji Park. In less than a decade this part of town has exploded, being transformed from acre after acre of rolling sagebrush into one of the largest shopping complexes outside of Reno. The seemingly endless land at the northern slope of the Indian Hills has proven very attractive for developers, bringing in a Super Wal*Mart, Best Buy, Trader Joe’s, Old Navy, Bed Bath and Beyond, Borders Books, In-N-Out Burger, Chilis, Del Taco, and dozens more retailers and restaurants. The twin shopping centers of Carson Valley Plaza and Clear Creek Plaza are one of the fastest-growing parts of Carson City, and there’s more in the works. Another big shopping center is planned, along with housing developments, an auto mall, and maybe even a hotel-casino.

The part of the story where this gets interesting, though, is that none of this is actually in Carson City. That’s because the county line was drawn at the bottom of the hill, not at the top, so all of this sloping land that you’d think would be part of Carson is really under the jurisdiction of Douglas County. And that means all the tax money from all these shopping and dining establishments goes south to Minden, not north to Carson, and this has caused the Carson City Supervisors no end of being pissed off over the last several years. But why is the county line at the bottom of the hill? Who’s responsible for this? Let’s see if we can go back in history and figure it out.

Millions of years ago (yes, we’re going back that far), huge forces deep inside the Earth under Nevada caused two mountain ranges to rise up, the Carson Range and the Pinenut Mountains. In between the two of them a flat valley formed, and in the middle of that valley was a stubborn outcropping of rock that today we call Indian Hills. These hills kind of pinch off the valley in the middle like an hourglass, enough that from the ground it looks like there are really two separate valleys. Today we call these the Carson and Eagle Valleys.

In the 1850s and 60s when this area was first being settled by Americans, the two valleys were home to two different settlements, Genoa in the south and Carson City in the north. And so when the Nevada Territory was created in 1861, it was only obvious that two separate counties should be formed. The Carson Valley was made into Douglas County, named after Stephen Douglas who had lost the presidency to Abraham Lincoln in 1860. And the Eagle Valley was made into Ormsby County, named after Major William Ormsby who was killed by Paiutes at Pyramid Lake the same year. And where to draw the line between these two counties? At the Indian Hills, of course, the outcropping of rock that still divided the two valleys.

But things got complicated. Every one of Ormsby County’s other borders was drawn at the top of a hill. Its border with Washoe County, to the north, followed the ridge of mountains separating the Eagle and Washoe Valleys. And the Lyon County border, to the east, was drawn at the top of the ridge between the Eagle Valley and Mound House. Ormsby County’s western border, of course, was in the middle of Lake Tahoe at the California state line. So that left the drawing of the Ormsby-Douglas border, which by all logic should have been drawn along the crest of the Indian Hills. But it wasn’t. Instead the county line was drawn to follow Clear Creek, a small stream that came out of the Carson Range right at the base of the Indian Hills. I don’t know why they chose the creek to be the county line, but back then the Indian Hills were completely desolate so it didn’t really matter where the line was.

The choice of Clear Creek as the county line made for some interesting stories. One I head was the story of a homesteader that lived right on the banks of the creek. He became increasingly frustrated with the taxes and leadership coming from Carson City, so one day he set out with his shovel and rerouted the creek to run around the other side of his house. And voila, just like that he was a resident of Douglas County.

Presumably sometime in the 20th century someone saw how silly it was to have the county line follow a seasonal creekbed, so they stretched it taut into the straight line we have today. But even now, you can see that it swings around Indian Hills instead of going over them, still more or less following the path of the creek. 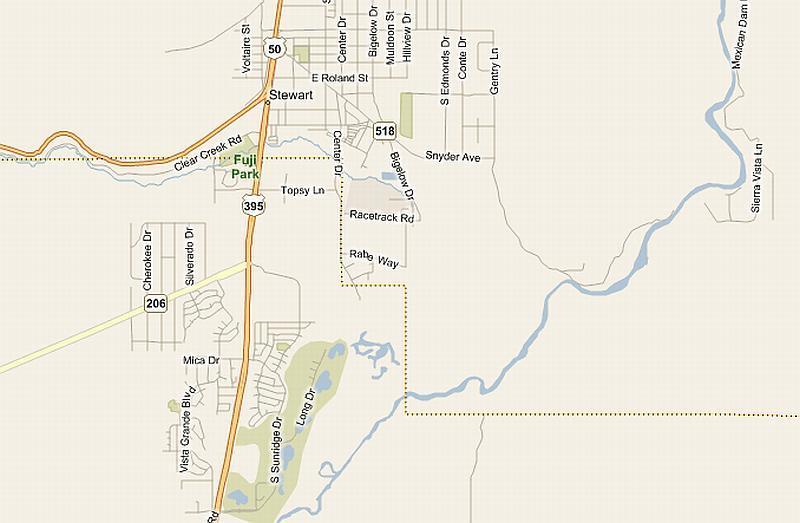 This map shows the county line as a dotted line that comes down Spooner Summit, through Fuji Park, then keeps going until it hits Center Drive coming out of the Stewart Indian Community. It turns south and follows Center Drive for a bit, right along the extreme eastern edge of Indian Hills. The line seems to be avoiding the hills all together. After one last detour to the east, it finally meets back up with Clear Creek and follows the path of the Virginia and Truckee right-of-way all the way to the Carson River. Then it turns east again, heading straight into the mountains where it meets up with Lyon County.

This line seems to have been deliberately drawn to keep all of the Indian Hills inside Douglas County, but the why of that doesn’t really make any sense to me. It could have easily been put at the crest of the hill, where modern-day Jack’s Valley Road meets the highway. And then we wouldn’t be having to sit through all of the teeth-gnashing we have today about how all the retailers and auto dealers are “defecting” to Douglas County, and how Douglas is “stealing” Carson’s tax base. Maybe if the Ormsby County founding fathers had known how valuable the Indian Hills would someday be, they wouldn’t have given them up so quickly.

Oh, and here’s one more funny thing about the county line: Look at the county line in this satellite picture, and see how it jogs around the old midget kart racetrack in Fuji Park. That’s pretty funny, how the racetrack was so important to Carson that the line had to be drawn that way. Especially since, further to the west, parts of the park spill over into Douglas County. Even the Fuji Park Cemetery seems to be split in half by the line, almost to where James Johnson and John Thoroughman are buried in separate counties. But god forbid Carson would give up their racetrack!