This photo was taken sometime in the 1800s along the banks of Clear Creek. At the bottom of Clear Creek Canyon is where the V-shaped flume brought logs down from Glenbrook and Spooner to be made into lumber for the Virginia City mines. But this building, and the people in the yard, had nothing to do with the Tahoe logging operations.

This was part of the Ormsby County Poor Farm, and the fellow on the porch is the superintendent, J.J. Abraham. Ever since the 1860s, almost as long as there had been a Carson City, there was a place set aside along the southern edge of the Eagle Valley for the less fortunate members of society. They could live here, work on the farm, and maybe even make a couple of dollars. For over a hundred years the Poor Farm was at this location. 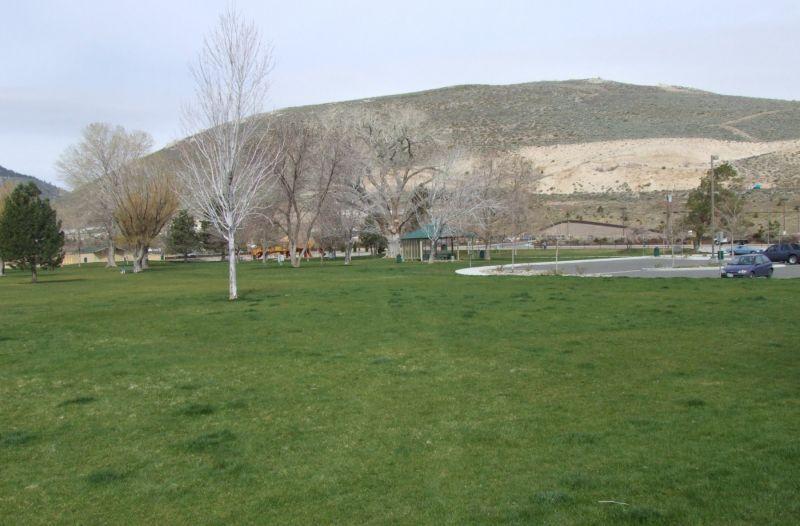 By the 1960s, the idea of a farm for the poor was about as archaic as the idea of an ophanage. So in 1965 Ormsby County closed the Poor Farm and put the last of its residents into nursing homes. Around the same time, Basil Woon‘s wife, Fuji, died. Basil was a screenwriter and author who had retired to Carson City, and on his wife’s passing he made a donation of $20,000 to the county, requesting that it be used to build a public park in his wife’s memory. The site along Clear Creek seemed like a perfect place for a park, so the county commissioners formed the Fuji Park Committee to oversee the transformation of the old Poor Farm grounds into a place the public could enjoy.

Today Fuji Park is separated into two areas: the grassy and shady park itself, and the Carson City Fairgrounds to the east where a rodeo arena has been built. Fuji Park has been threatened several times over its lifetime, most notably in 2001 when a development company wanted to buy the fairgrounds and demolish it to build a shopping center. The led to the grassroots “Save Fuji Park” movement, which resulted in an initiative being passed that would protect the park and fairgrounds in perpetuity. And now another developer is building a new casino next door, on the Bodine’s site, and wants to use the fairgrounds as overflow parking. This is putting him at odds with the people who actually use the fairgrounds, and they’re still trying to work out an agreement there.

Today Fuji Park is the only park in Carson City that allows dogs, so you’ll often find folks there out for a jog with their four-legged friends. There are also dog agility competitions taking place at the park, along with craft fairs, cars shows, renaissance fairs, and kids enjoying the playground.

And watching over everything at Fuji Park are two old residents of the Poor Farm that never left. John Thoroughman and James Johnson were both military veterans who spent their last days at the Poor Farm, and after they passed their bodies were buried here in a small cemetery. In an out-of-the-way corner of the park, on the opposite side of Clear Creek, you can still find their grave markers, undisturbed nearly a hundred years later. 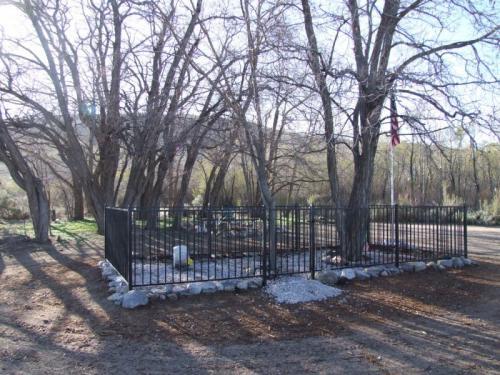 For more on the cemetery, see this article.