It looks like I missed all the excitement! I flew out of town on Christmas Day, and then last weekend from the comfort of my hotel in downtown Seattle I started hearing about flooding in Carson City, mudslides coming down from the hills, road closures, and all kinds of other things that made me glad I scheduled my vacation when I did. And then we arrived back in town Monday night to find this muddy, swampy mess, all covered with a fresh layer of ice and snow. So what really happened while I was away? He’s what I pieced together from reading the newspaper:

Late last week, a winter storm brought snow to the mountains and rain to the valley. Unlike our usual storms, which come in for a few hours and then move on, this one wasn’t going anywhere. It rained all day Friday, and by Saturday the rivers and streams were beginning to fill up. Carson City was placed under flood watch.

Saturday apparently was the worst day. The Carson River had risen above its flood stage, sending water through the golf course in Gardnerville and closing Hwy 395 at Cradlebaugh Bridge. Muller and Genoa Lanes were closed because the river was flowing over the pavement. Loose soil and dead trees from the Waterfall Fire washed down the mountains outside Carson City, bringing a flow of mud and logs that clogged the storm drains and flowed down city streets. Residents everywhere were piling up sandbags to keep the water out. Carson’s roads flooded, causing some cars to stall out and even float away. For a while it looked like we might have a repeat of the 1997 New Year’s Flood, where the waters just kept coming and most of Carson City and the Carson Valley were shut down for days. But, late on Saturday, the storm slowed down and the waters started subsiding. The worst was over. 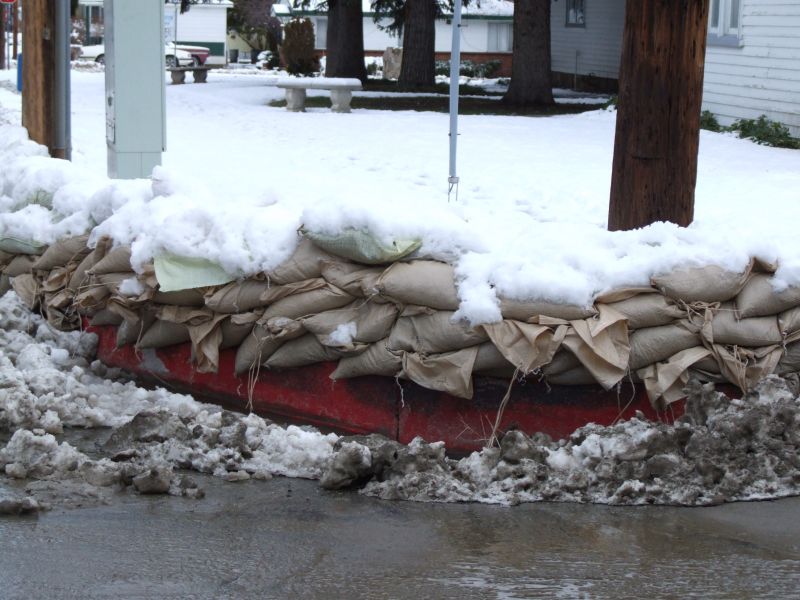 Sunday was the dawn of a new year, and also a day of cleaning for Carson City. Snowplows were put to work clearing the streets of mud. Free sandbags were available for the taking for anyone who was still working to keep the water away. Prison inmates were put to work all over the state, filling sandbags and fixing and clearing roads. Businesses dealt with cleaning up and trying to reopen. And although the storm had subsided, rumors of a second wave of moisture were floating around. It looked like Mother Nature wasn’t done with us yet. 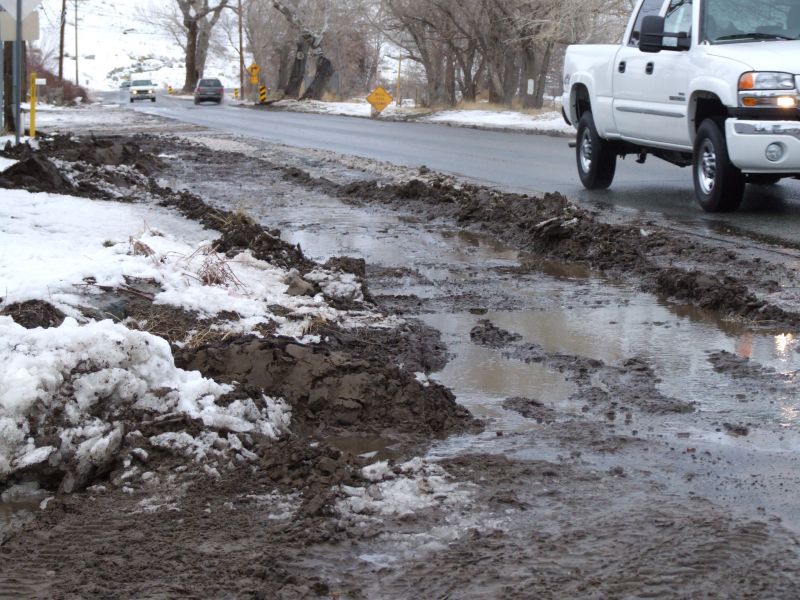 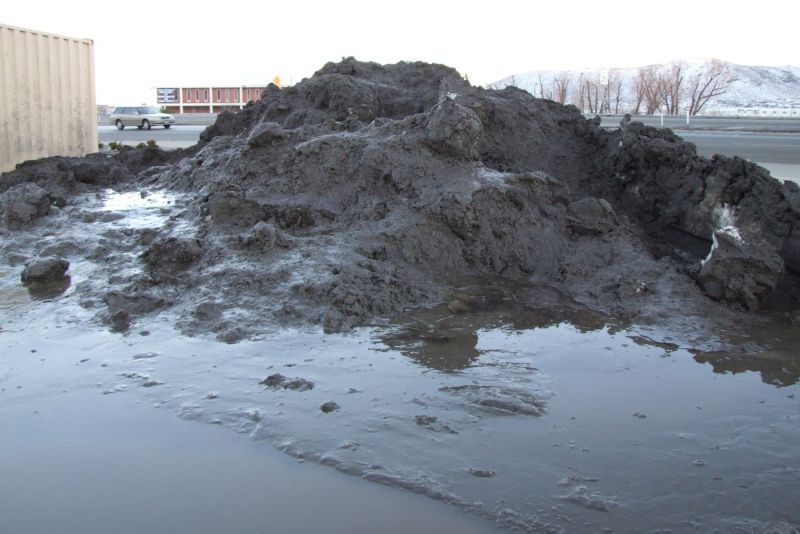 And indeed she wasn’t. On Monday it started snowing, covering all the mud and still-standing water all over town with a thick blanket of 4 to 6 inches of snow. Snowplows that had been pushing mud around were now back to pushing snow. And as the white stuff fell, it hid the true impact of what had happened over the weekend. Muddy roads started to become a pristine white. Areas of standing flood water became icy ponds. Carson City started to look like it did after any normal winter storm. 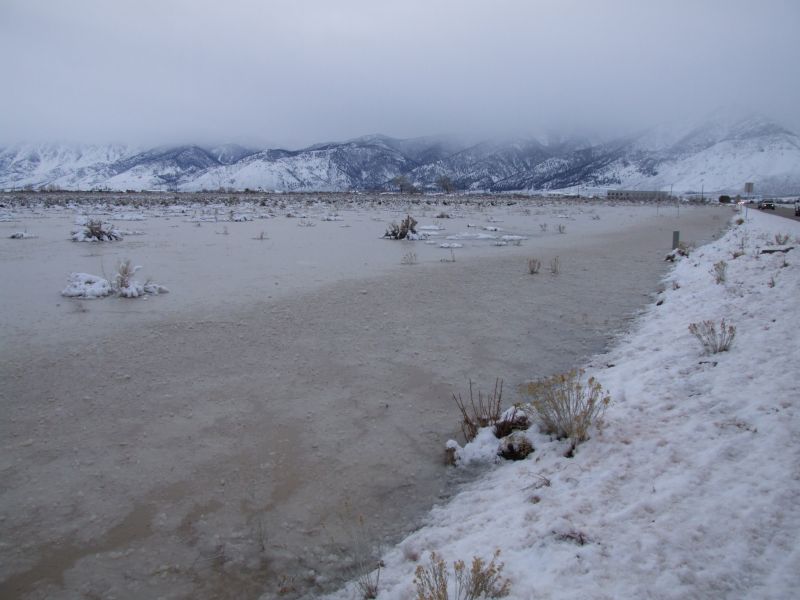 But even though Mother Nature is trying to hide it, we still know it’s there. Underneath all that snow is a layer of mud that needs to be cleaned up. There are flood waters that need to recede. There are damaged roads, like Hwy 342 to Gold Hill that collapsed into a sinkhole, and Six Mile Canyon between Dayton and VC which was so undermined by the storm that it will remain closed for months. The governor has declared several counties to be disaster areas, and we’ve got a lot of work to do to get back to normal. 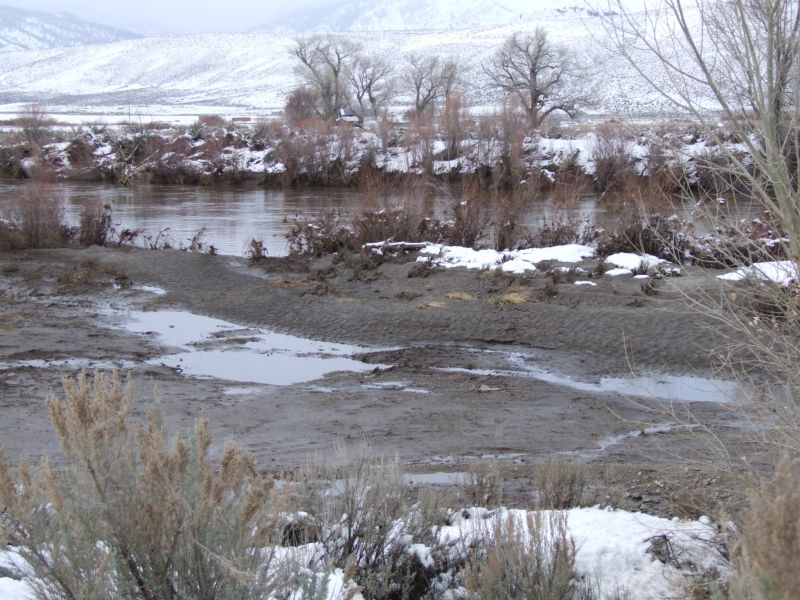 But, it could have been a lot worse. Anyone who was here in 1997 knows that. And anyone who wasn’t in the area for that flood should ask someone who was. So we got off pretty easy this time.

But now I want to hear your stories. I want to see your pictures. Ryan Jerz has already posted a video and some Flickr photos showing what the Truckee River in downtown Reno looked like on Saturday. Now I want to hear from the rest of you, the ones who, unlike me, actually had to live through Saturday’s flooding. Post in my comments. E-mail me pictures, or post them yourself. Or put something on your own website and send it to me. I know that what I read in the newspaper is only the smallest sliver of what really happened out there. I want to hear more, and I’m sure everyone else does too. Time to share!