Okay, everyone reading this has to drive out to Johnson Lane tonight. No excuses, no shirking your duties. If you are in Northern Nevada, you need to hop in your car after sunset tonight and drive to the Carson Valley. If you are an expatriate living somewhere else, you need to hop on a plane and get here as soon as you can. If you’re in a hospital bed, get them to call an ambulance. Because out in Johnson Lane there is a Christmas light display that you’re not going to want to miss.

Last night we went out in search of awesome Christmas displays, and we spent the evening coming across display after display that were depressingly similar. Eveyone has the icicle lights, everyone has the wireframe reindeer, everyone has an inflatable Santa on the roof. After a couple of hours of this we decided to head home, and hit one last neighborhood on our way.

That’s when we had a revelation and realized what an awesome Christmas display truly could be. 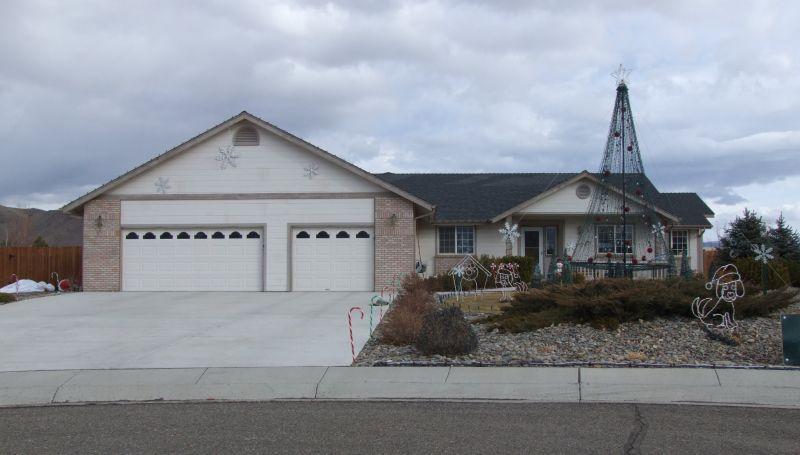 Last year I wrote what I called “Radio Free Suburbia”, where I talked about how one of our neighbors was broadcasting Christmas songs over the radio with a low-wattage transmitter. I thought it was a pretty cool idea, but because we didn’t actually spend a lot of time in front of their house, it wasn’t until this year that we realized we were only seeing half of the puzzle, and we were missing how cool it actually was. Last night we drove by again, and found out that this year they were once again broadcasting over the air. But this time we spent a little more time parked in the street looking at their house, and we began to notice something: the lights on their house and in their yard were blinking, like so many other houses we had seen that night. But instead of blinking in a random pattern, they seemed to be programmed, like they were putting on a show.. And as we sat there longer, with their radio station tuned in the background, our brains put all the pieces together: this light show was actually synchronized to the music! They had turned their entire yard into a stage, playing out this spectacle that must have taken weeks or months of programming.

Well, we sat there, transfixed. Song after song came on the radio, each one of them carefully choreographed in the lights. Other cars pulled up to the house and shut their engines off. And before we knew if, maybe 20 minutes later, we had sat through the entire loop and the songs started to repeat. We drove away and looked at some other houses, but everything was a disappointment after that.

I was sitting there watching this show, and wondering how it was done, when at one point Wayne Kremer, the owner, came on the radio explaining how he had set it up. It uses a software called Light-O-Rama, which coordinates the music with several controller boxes placed around the property. There are ten boxes controlling 134 channels and over 50,000 lights! After getting home and going a little digging online, I found the same setup used at a few other houses. Carson Williams in Ohio did one, and you’ve also got the Plymouth Lights, the Lindsay Lights, and Wonderland Christmas that are all based on the same concept. But being able to see it live beats watching a grainy video any day.

Speaking of which, here’s a grainy video of the show! I uploaded one song to Ourmedia for everyone who can’t make it out to see the lights, or who wants to sample the show before they go.

If you are in the area and you do want to go visit, the lights are in the Johnson Lane area of Douglas County. Drive Hwy 395 to Stephanie Way, turn east on Stephanie and drive about a mile and a half to Saratoga Springs. Turn left into Saratoga Springs, then take the second right onto Chaparral Court. The lights are at the end of the cul-de-sac, on the left. The address is 1176 Chaparral Court (here’s a map). If you go check out the lights, post a comment letting everyone know what you think!

Update, 12/24: I just found out that the lights have their own official website, www.NevadaChristmas.com. It includes, among other things, a complete video of the entire 19-minute show. Awesome!

The Carson Valley Dancing Lights Are Back