St. Teresa of Avila Catholic Church Then and Now 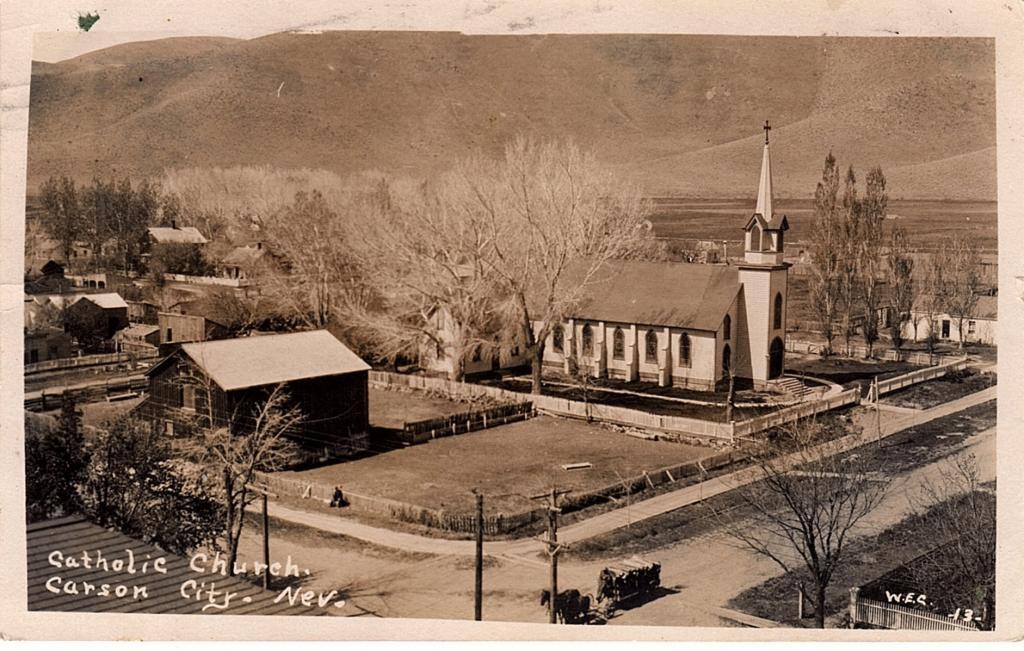 In the early days of Carson City, its churches were an important part of life. This frontier town attracted settlers of many faiths. The Methodists, Presbyterians, and Episcopalians all built churches in Carson City in the 1860s which are still standing today. St Teresa of Avila Catholic Community had to make a couple of attempts at building a lasting structure. They built a church here, at the corner of King and Thompson streets, in 1860, but it blew over in a storm. A replacement church built in 1865 was also deemed inadequate for the congregation’s needs, so in 1871 this wooden church was built, and that one finally proved to be the one that stood the test of time.

This photo is from several decades later, August of 1911. Carson City had grown a little bit in the decades, but there were still large tracts of ranchland surrounding the small town. Some of that ranchland can be seen in the background, stretching from behind the church all the way to the base of C Hill. Much of the neighborhood around the church was residential, but there were some larger buildings in this part of town too. Next door was a small barn. Out of frame to the left was the large brick building of the Carson Brewing Company. Behind the church, a couple of decades after this photo, a new high school would be built. And the photo itself was taken not from an airplane or hot air balloon, but from an upper floor of a large schoolhouse that sat on King Street.

The last century and change has seen even more explosive growth in Carson City, growth that would have been unimaginable when St. Teresa’s was built. Houses were built all the way to the base of C Hill, filling in all the old ranchland. The congregation grew and the church was expanded and faced with brick to preserve the historic structure, but still it was too small to meet the needs of the community. So in the late 1990s, a plan was made for St. Teresa’s to leave downtown and build a larger church elsewhere in town. That new church opened on Lompa Lane in December 2001.

The neighborhood around the church retained its residential character, but there have been changes. The barn was torn down for parking once cars became popular. The brewery next door shut down, and the city newspaper moved in for a while. But then after the newspaper moved out, the old brewery building was put to a new purpose: home to a center of the arts. With the growth of Carson City, the Brewery Arts Center also grew in popularity, and around the same time that the Catholic Church was looking for more space, so was the BAC. A deal was made in the year 2000 for the arts center to purchase and move into the old church once the congregation had moved out. For the last 20 years the deconsecrated former church has been the Performance Hall for the Brewery Arts Center, retaining the architecture and acoustics but putting them towards a more secular purpose. The parking lot next door, once home to a barn, is now transformed into an outdoor theater during the summer for free concerts. And the school that the historic photo was taken from was torn down and replaced with a more modern office building. This present day photo was taken from the 4th floor of that building, with the same aerial view of the old church.

Looking back at the old school house from which the historic photo was taken. It was likely taken from the bell tower. 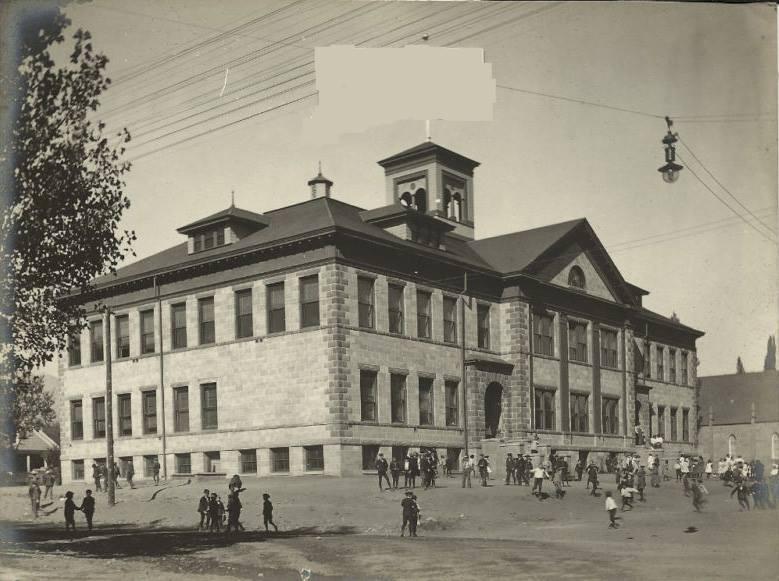 The Carson Brewing Company next door, which later became the Brewery Arts Center. A closer view of St. Teresa’s Church, before it was expanded and clad in brick.