Ghosts of Carson: The Ormsby House

I guess it was inevitable that the Ormsby House would end up here. The Ghosts of Carson has always been a series that looks at buildings that have been abandoned and forgotten, and the Ormsby House has straddled the line for many years. It was never quite abandoned; even up to a couple of years ago there was always a skeleton crew of construction workers on site doing something to the building. And it was never really forgotten; it’s pretty hard to truly forget a giant building in the heart of town, plus there would be news dribbling out every now and then about the progress, another interview with the owners, another prediction about how much longer the work would be going on for. But in recent years all that has dried up. The last of the workers packed up and left quite a while ago. For Sale signs went up as the owners finally conceded defeat and gave up the project. And barring a little bit of excitement last year, the newspapers have stopped talking about the Ormsby House because there’s been nothing to talk about. The place really has become abandoned, and it’s fading into the background of our daily lives as a hulking edifice that we’ve all given up on years ago. We drive or walk by it every day, or catch a glimpse of it on the skyline, and if we give it any thought at all it’s just a resigned chuckle. The Ormsby House has truly become a ghost, and therefore it’s finally made it into this column.

I was prompted to induct the Ormsby House into the list of Ghosts by the passing of an auspicious anniversary. 10 years ago, in 2010, I wrote an article about how the Ormsby House had been closed and under construction for 10 years. So do a little bit of math, and you can figure out that we are now at 20 years. It was September 21, 2000, when the announcement came out that the Ormsby House would be closing. Years of neglect had built up a pile of mechanical and structural problems, and the owners had been trying to do renovation without closing the doors. It was too much, though, so they decided that they needed a few months to swarm the site with construction workers and fix everything all at once. Their first announcement was that the remodel would take about 9 months, and reopening was scheduled for July 4th, 2001. The doors actually closed on October 29, 2000. The 20 year anniversary of that date is upon us.

What followed that first announcement and closing is a long ongoing story that I’ve tried to keep up with here over the last two decades. They started the renovation in earnest, but then their ambitions grew, and their plans for the remodel grew with them. The length of the closure slipped to a year, two years, three years, as they came up with new ideas and ran into new problems. As they stripped the building down to its bones they found more mechanical problems that needed to be tackled, but their plans for the finished project also grew more and more grand. The biggest flurry of work was done around the years 2003-2006, as the outside of the building was modified, added to, and painted. The difference that was made in those three years was pretty astounding. For a while it looked like the project was going to go well and the end result would be as impressive as they promised. But the cracks were starting to show already. Another project could have done that exterior remodel in one year instead of three, signs of a pervasive slowness even while they were busily working. And then some of the finishing details on the exterior, like rockwork, sidewalks and parking lots, took even longer than that. Work on the project seemed to get slower and slower as time went along. And even though the outside eventually looked great, a peek inside the windows showed that there was basically nothing happening inside.

The Ormsby House was always a punchline, ever since their first deadline slipped. But as the years went on, its reputation became worse and worse. Most people I think were hopeful that it would finally reopen one day, and be as opulent as promised, but faith in that dream slipped over the years. In 2006 the newspaper put up a reader poll: â€œWhich local project will be completed first? V&T Railroad, the Carson City Freeway, or the Ormsby House?” The Ormsby House was the clear loser in the poll. Even back then the populace of Carson City had lost any optimism about the project. And the poll answerers were correct. The V&T Railroad started taking passengers in 2009, and the freeway was finished in 2017. And the Ormsby House? Well, here we are.

Finally, even the owners had had enough. Al Fiegehen and Don Lehr, the partners who had bought the Ormsby House, were ready for retirement and decided that they had lost interest in the project. In 2016 the news came out that the Ormsby House was going up for sale. Despite the announcement, though, work continued through that year on paving the parking lot and putting some more touches on the exterior of the building. But once that was done, the construction crews moved out and the period of abandonment began.

It turned out there weren’t any takers for a large hotel/casino. The property has been on the market for four years now, and so far no one has bought it. Gaming as an industry is kind of shrinking, especially in Nevada now that so many other states are starting to allow gambling in some form. The owners stated that one of their reasons for selling was that the market had changed and they weren’t sure if it would be feasible to reopen as a hotel/casino. They were looking to sell to perhaps a major hotel chain, that would open it as a non-gaming hotel, or to someone who would renovate it as housing. But so far, there have been a few people to show interest, but no one to actually step up and buy it.

The most serious offer entertained on the Ormsby House happened last year, in September of 2019. That was when Joe D’Angelo, a developer from Las Vegas, announced that he was buying the building, and he had some pretty ambitious plans. The lower two floors of the property would remain open as retail and dining space. The tower would be partially hotel and partially residential. Convention space would be opened up, and a green energy plant would be built on site. It was a grand plan, and it was just about the best case scenario that most people had hoped for. But there were some hiccups to the story. He was a little vague on some of his ideas, and reading between the lines brought up more questions than answers. His plan included rents in the neighborhood of $10,000 per month, an on-site pharmacy, and medical concierge care. The plans made it sound like it would be a nursing home, and while he denied that, he was cagey about the actual details. You need to read the article I wrote back then for more about this story. That all fell through when the city insisted he apply for a number of special use permits, and he balked at that demand. We haven’t heard any more from him in the last year.

So now that’s where we sit with the Ormsby House. No buyers, no progress, no news. The new paint they put up 15 years ago is starting to fade. Weeds are growing in unfinished landscaping areas. A peek inside the windows shows exposed steel beams and concrete floors still. The Ormsby House is in limbo, waiting for someone to come along who wishes to pick up a project that was begun two decades ago and carry it across the finish line. Will that ever happen? Who knows. 20 years is plenty of time to become jaded and lose any optimism about the project. For now all we can expect is that the Ormsby House will remain, and exist, and mystify. I’ve been writing about the project for 18 years, almost as long as they’ve been working on it, and something tells me I’m not done yet.

But for now, it will remain Carson City’s most prominent ghost.

Update (10/29): Maybe not! Two days after I wrote this, news came out that a buyer had entered escrow for the Ormsby House. There may be life left yet.

Enjoy this photo gallery of the Ormsby House. I took a walk around the building earlier this month for the first time in a good while, and tried to capture how the building looks now, in its ghostly state. Some of the renovations still look good, but decay is starting to set in here and there, betraying the abandoned nature of the building. At the end we’ll look at some old photos of how it used to look before the renovations. 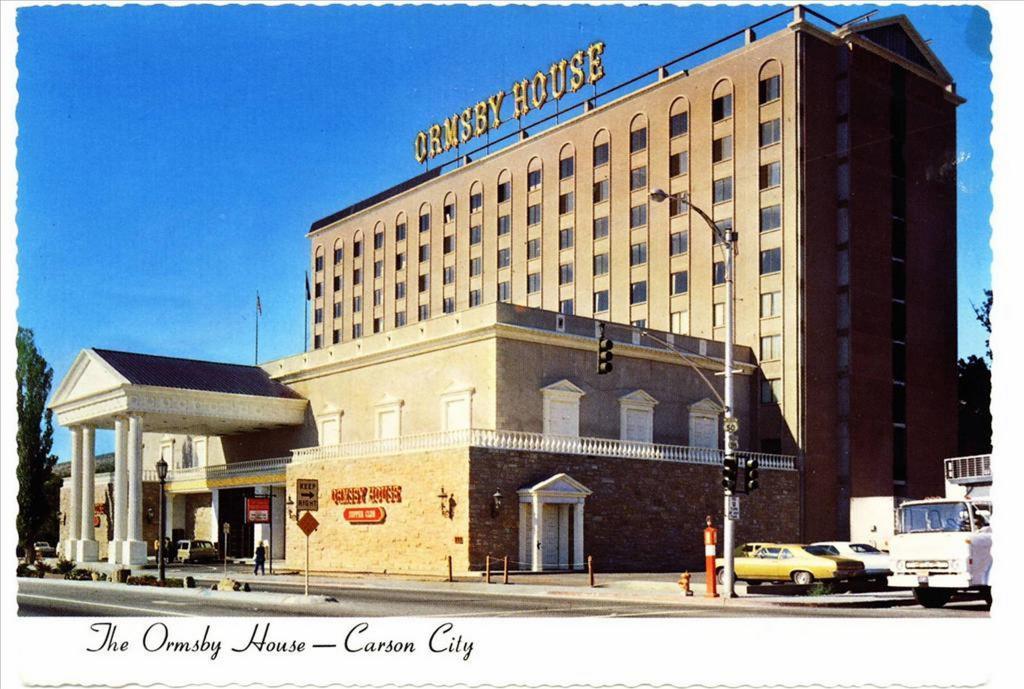 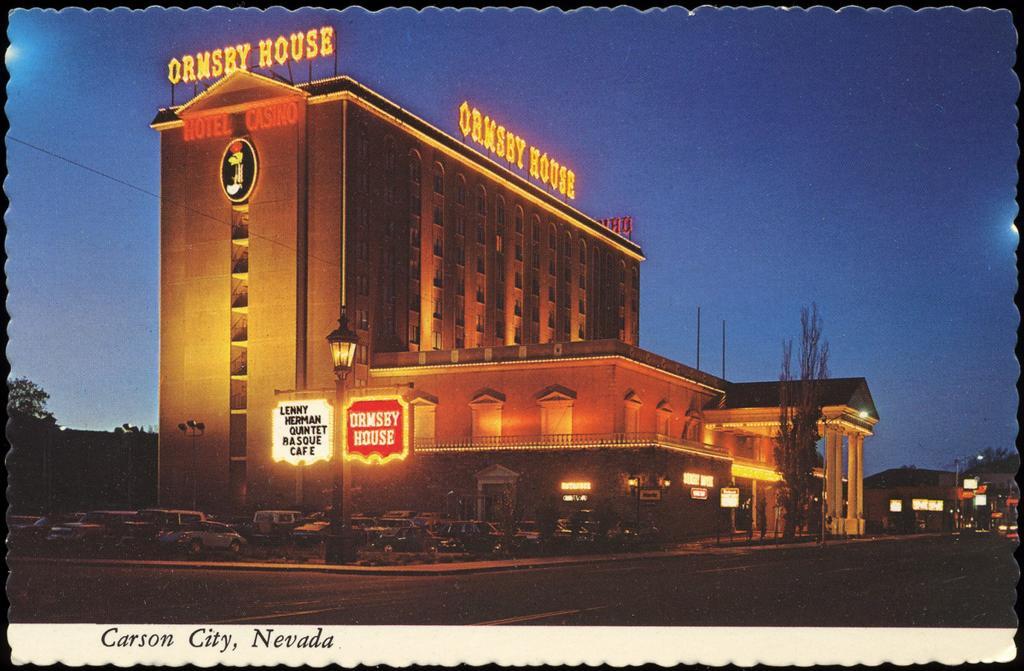 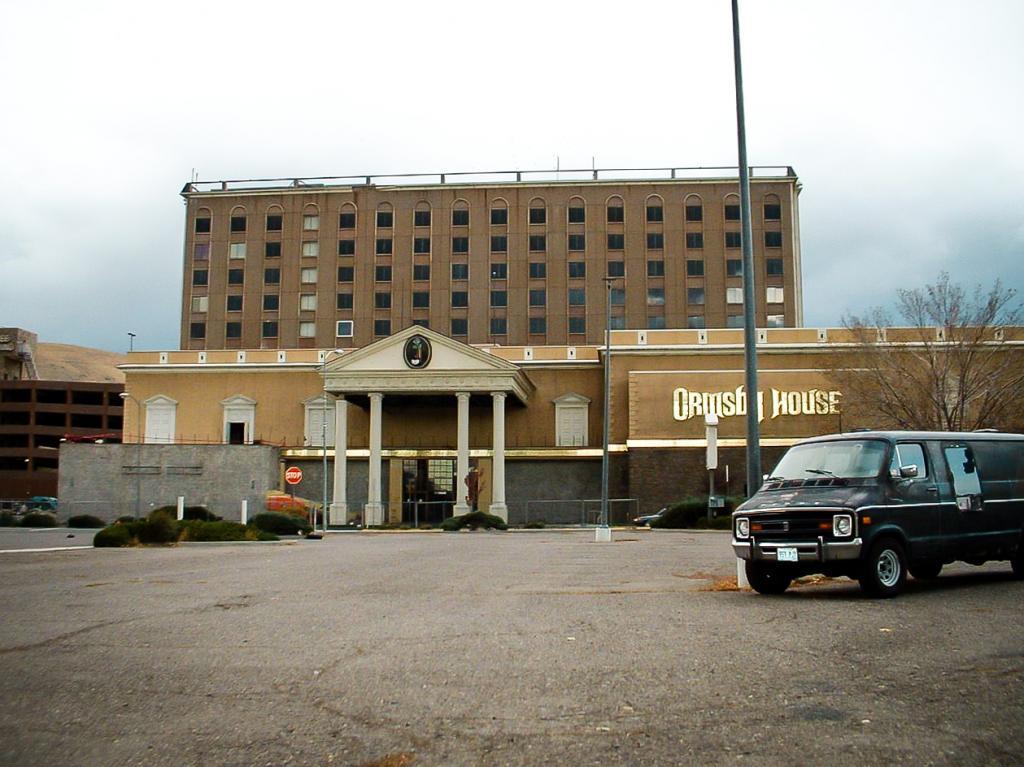