After yesterday’s article about the freeway, and how Colorado Street was closing permanently on Monday, I got to thinking more about this final phase of the freeway. The Nevada Appeal today says that construction indeed is starting on Monday, and will continue in bits and pieces for the next two years. The first thing to go will be Clearview Drive, which will be closed for an extended time while a new bridge is built. Then next will be Koontz, also getting a bridge. And then…well, it sounds like that’s it for now. That’s all they have money for. The grand opening for the completed freeway is still slated for 2014, but I can easily imagine that getting pushed back.

This morning, though, I spent a little time in South Carson, getting a feel for the parts of town that the freeway is going to disrupt. When the freeway came through North Carson it put up a giant wall through sleepy parts of the town, and I never really went out there to see what it looked like “before”. I didn’t want to miss that chance with the southern leg of the freeway.

One thing I noticed on the map is that there are a few more “doomed houses” in the south. For the most part the path of the freeway has stayed free of development, and much of the land that’s going to be torn up is still native sagebrush. But in a few places people built streets and houses, maybe hedging their bets that the freeway would never get built, or that some other alignment would be used that would spare them. But now that the final path of the freeway has been chosen, these houses are right in the way, and ready for their date with the bulldozer. Years ago I did a feature on a few of these doomed houses, the ones along Edmonds. Those were torn down a long time ago. But yesterday I really took a good look at the map, and noticed several new doomed houses, ones that I didn’t know about before.

There’s this on-again, off-again little street called Bennett Avenue that makes its jumbled way though the sagebrush of south Carson. In some places it’s paved, in others it’s just a dirt trail. This street marks the exact place where the freeway will be built, and I noticed a few houses still standing on the map. When I actually went down there, though, I found that the map was out of date. Some of the houses had already been demolished, long ago it seems by the look of the lots. (This same map still shows all of the doomed houses on Edmonds standing, and construction on Phase 1 of the freeway has just barely started. I think Google needs to update their imagery.) But a couple of them are still there, although boarded up and just wishing they would get it over with and bring in the bulldozers already.

Now on with the pictures.

This house on Snyder has already been torn down, but the garage remains. 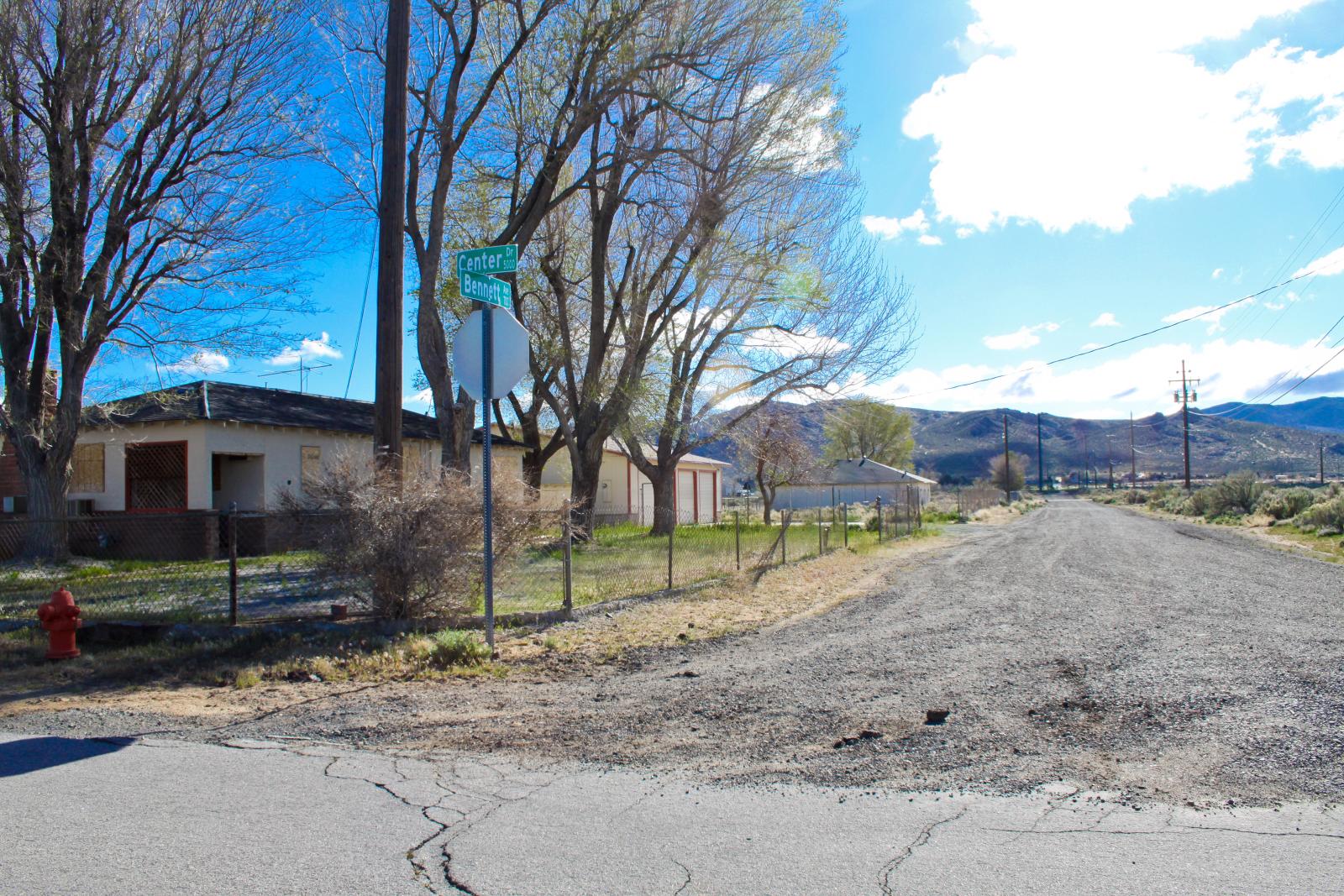 Bennett Avenue looks like a nice rural dirt road. Everything here is going to be gone soon. 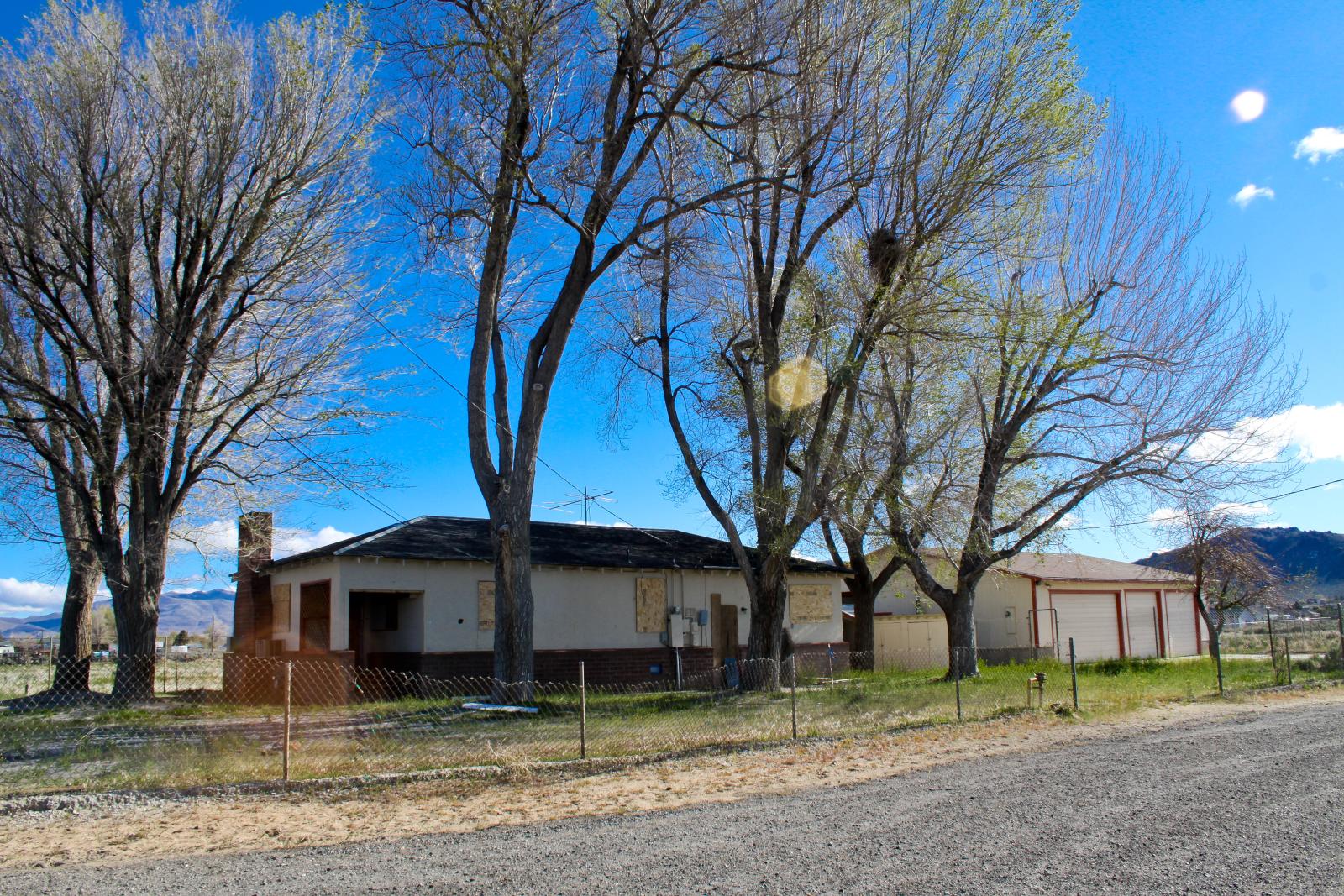 This doomed house is still standing, but it’s all boarded up. 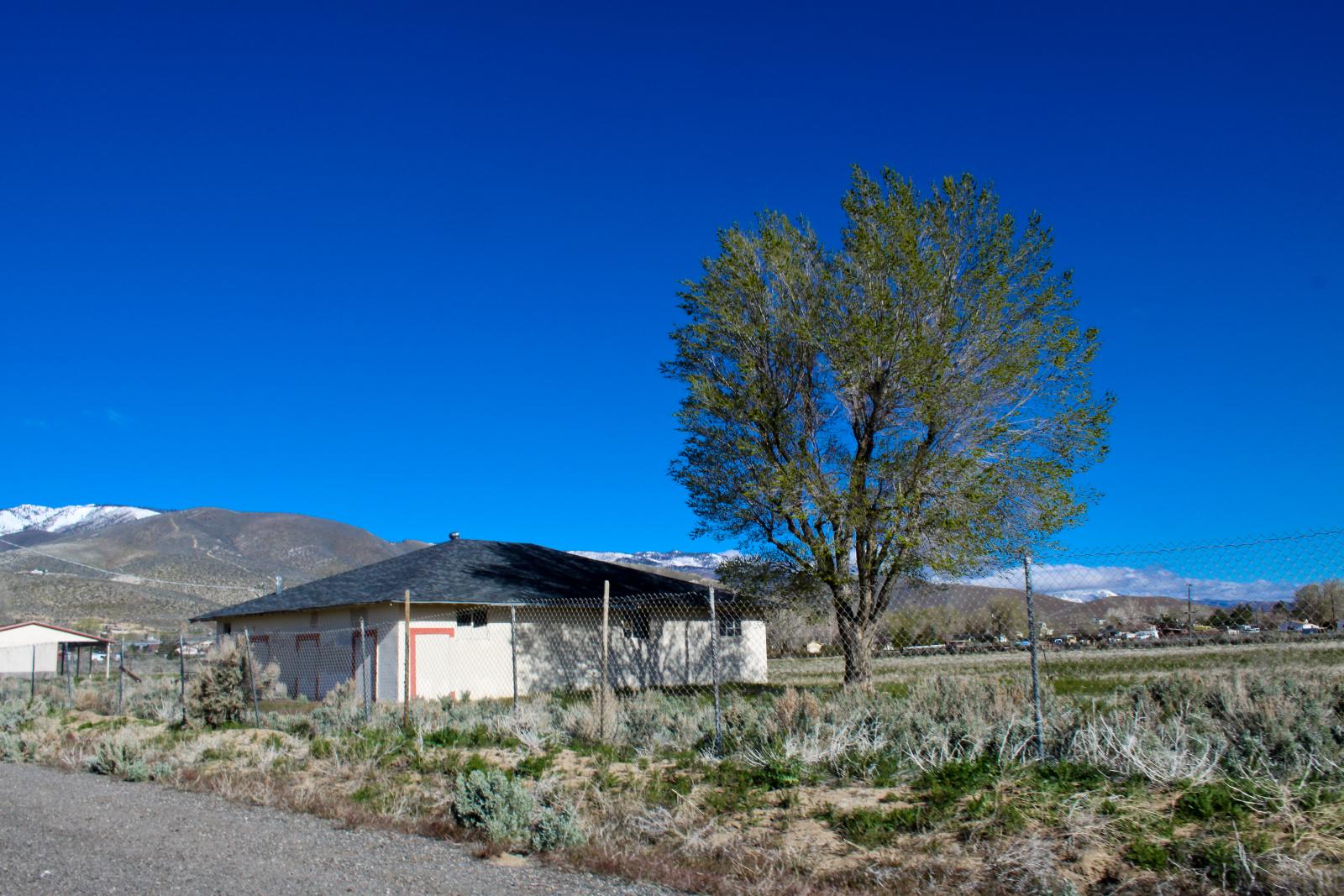 This garage is boarded up too. 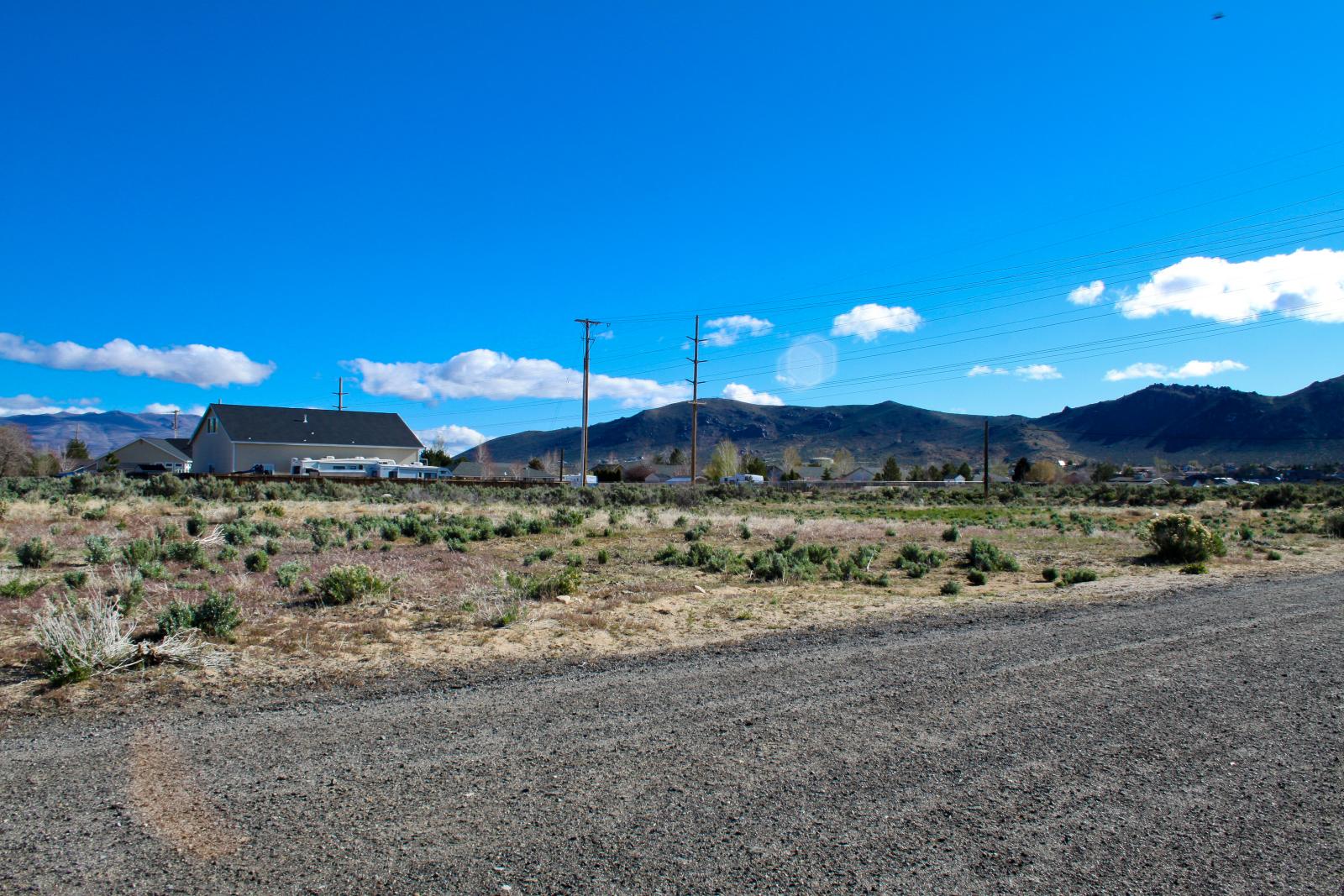 The map shows two houses next door to each other on this spot, but it’s obvious that they were torn down a long time ago. 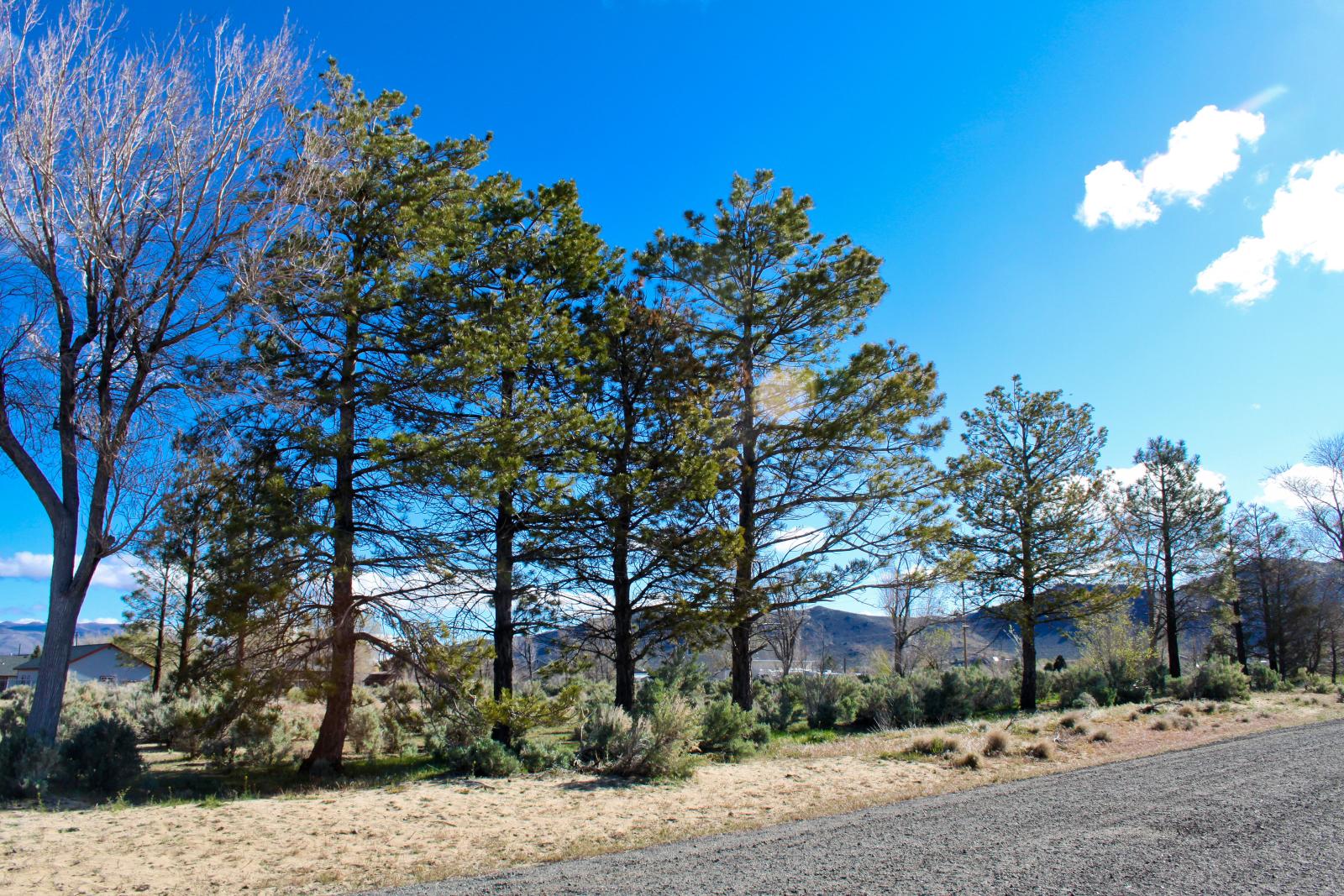 Some trees along Bennett Ave. 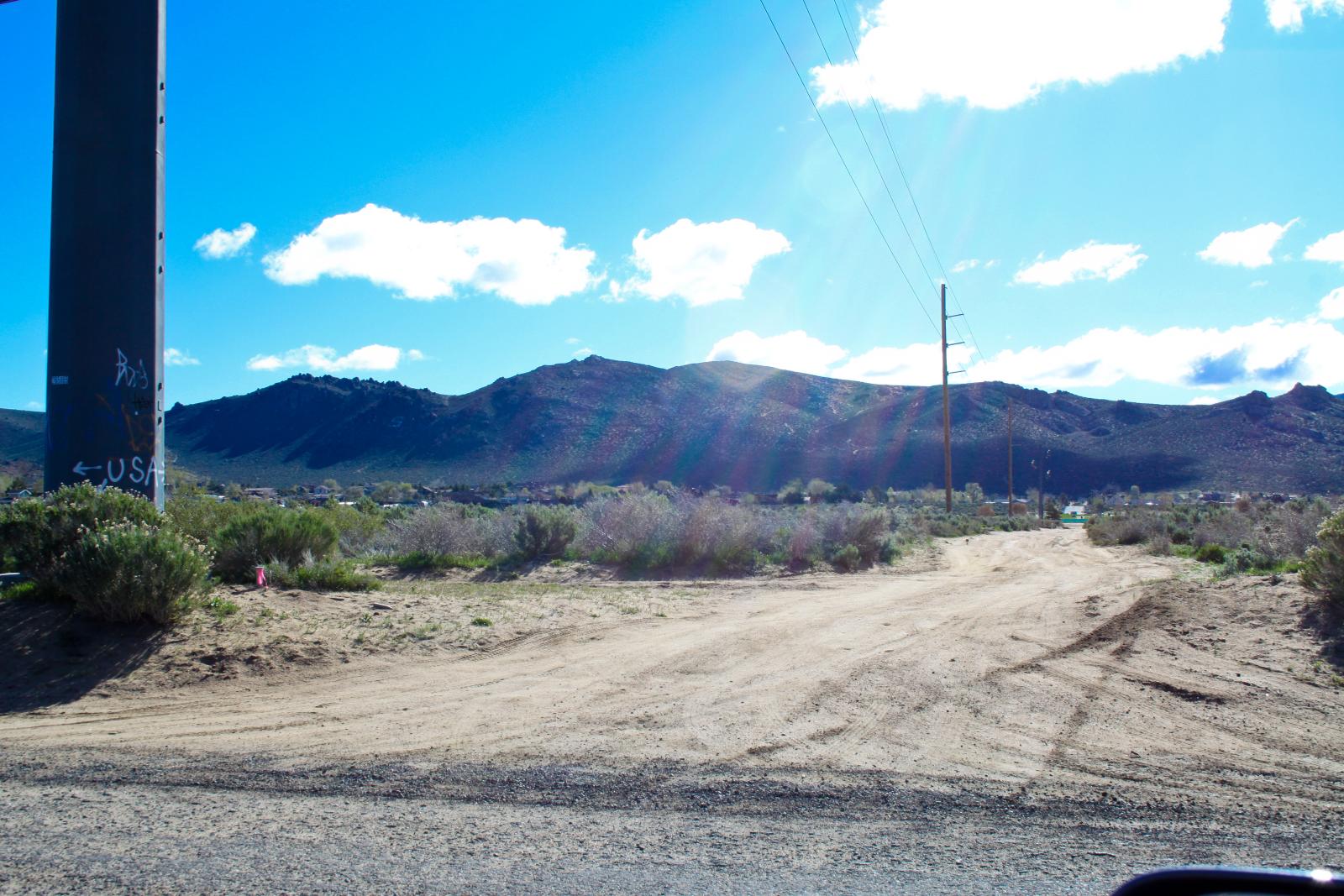 Bennett turns into dirt here and continues on towards the hills. The freeway is going to plow through here. This is where it will curve as it turns west to meet Hwy 50. 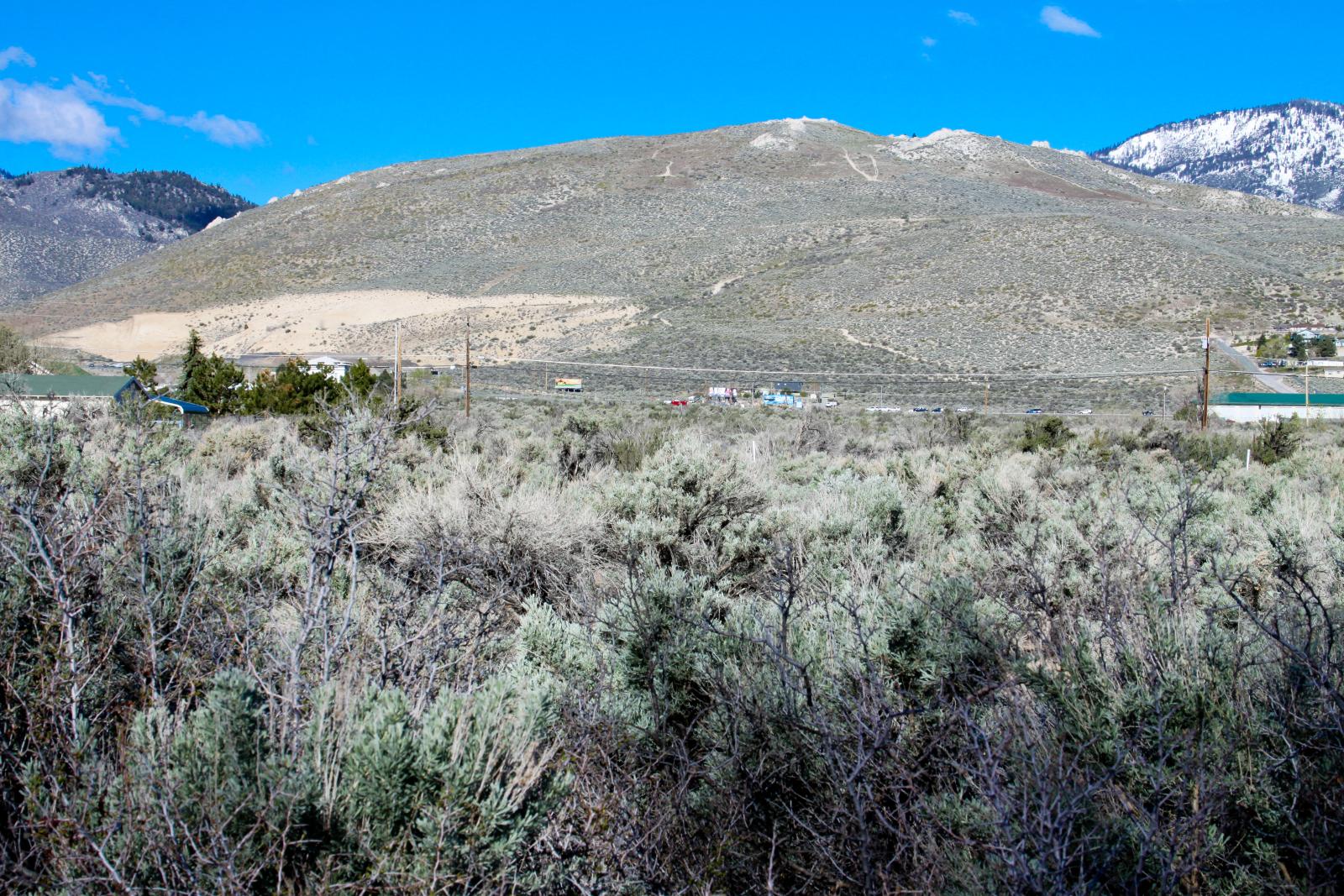 Looking west through the sagebrush. From here the freeway will have a straight shot up to Spooner. 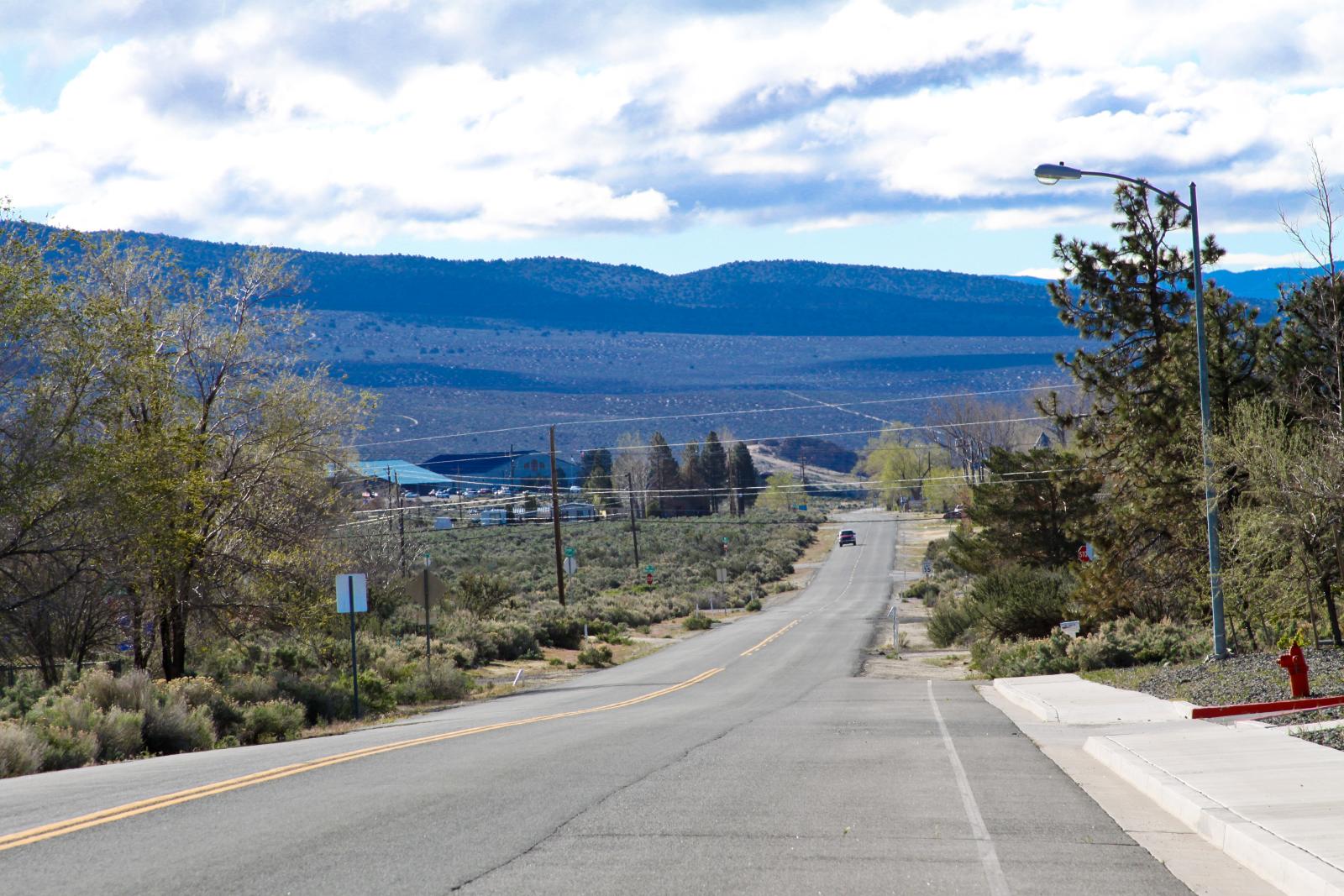 Snyder Avenue. It’s a straight shot now, but when the freeway is built an overpass will be here, raising Snyder up and over the roadbed. Snyder will be one of only a few places to cross the freeway in the south part of town. 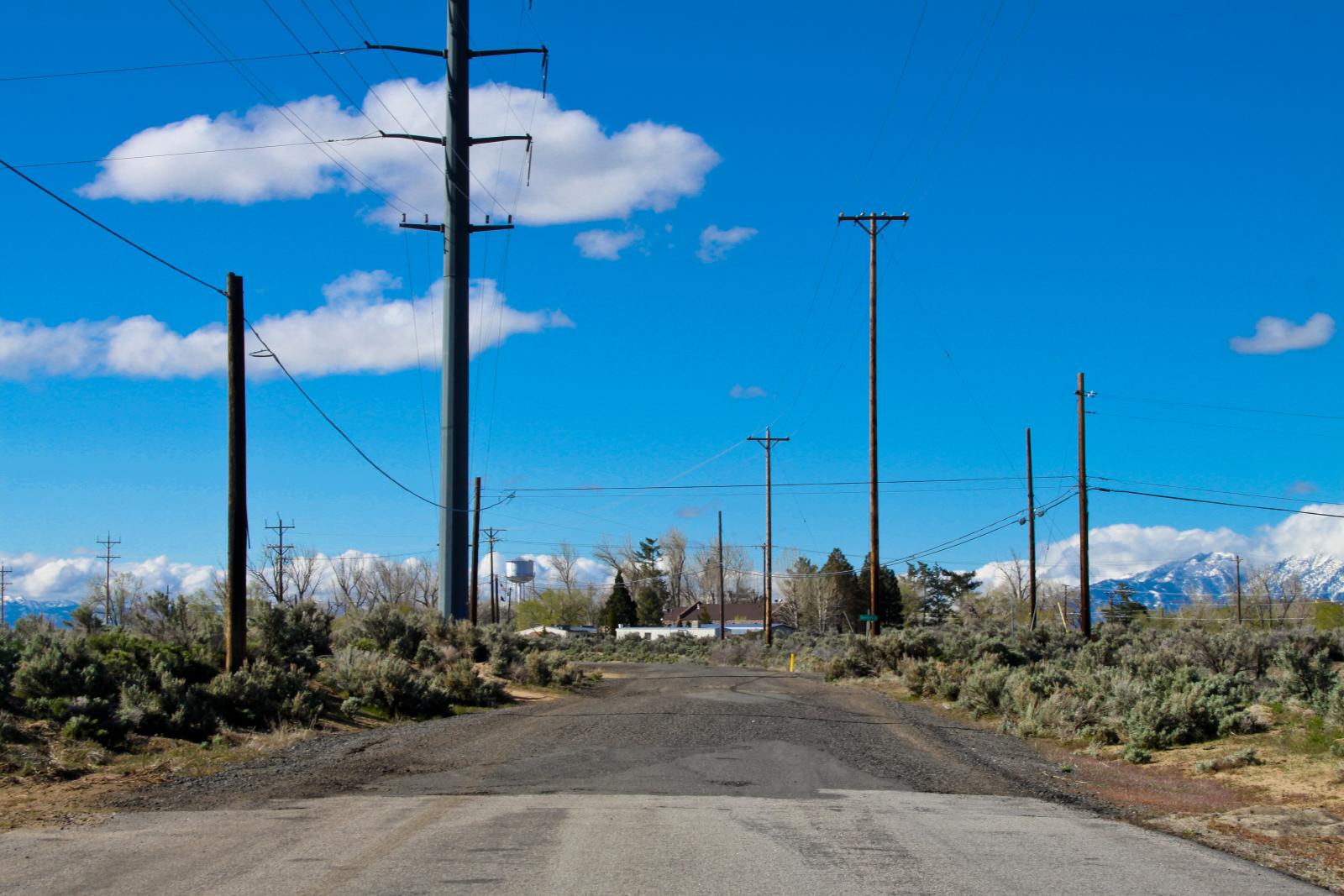 This shot looks south on Bigelow. The freeway will be right about where that big power pole is. Bigelow is the former right-of-way of the V&T Railroad. 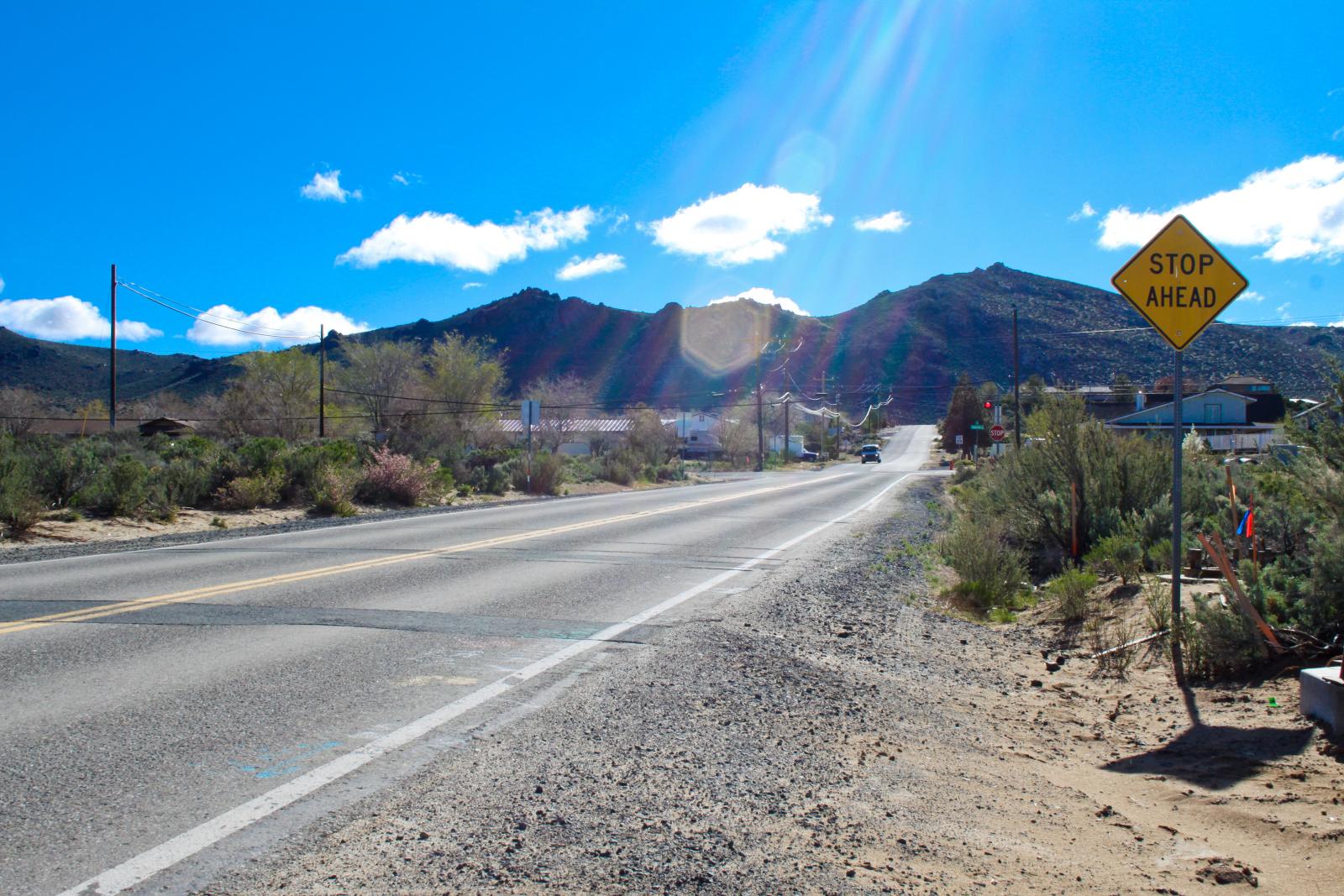 Clearview Drive. Soon construction will start here, digging out the roadway and replacing it with a bridge. The freeway will be down in a trench here, and after the bridge is built Clearview will stay pretty much flat like it is now. 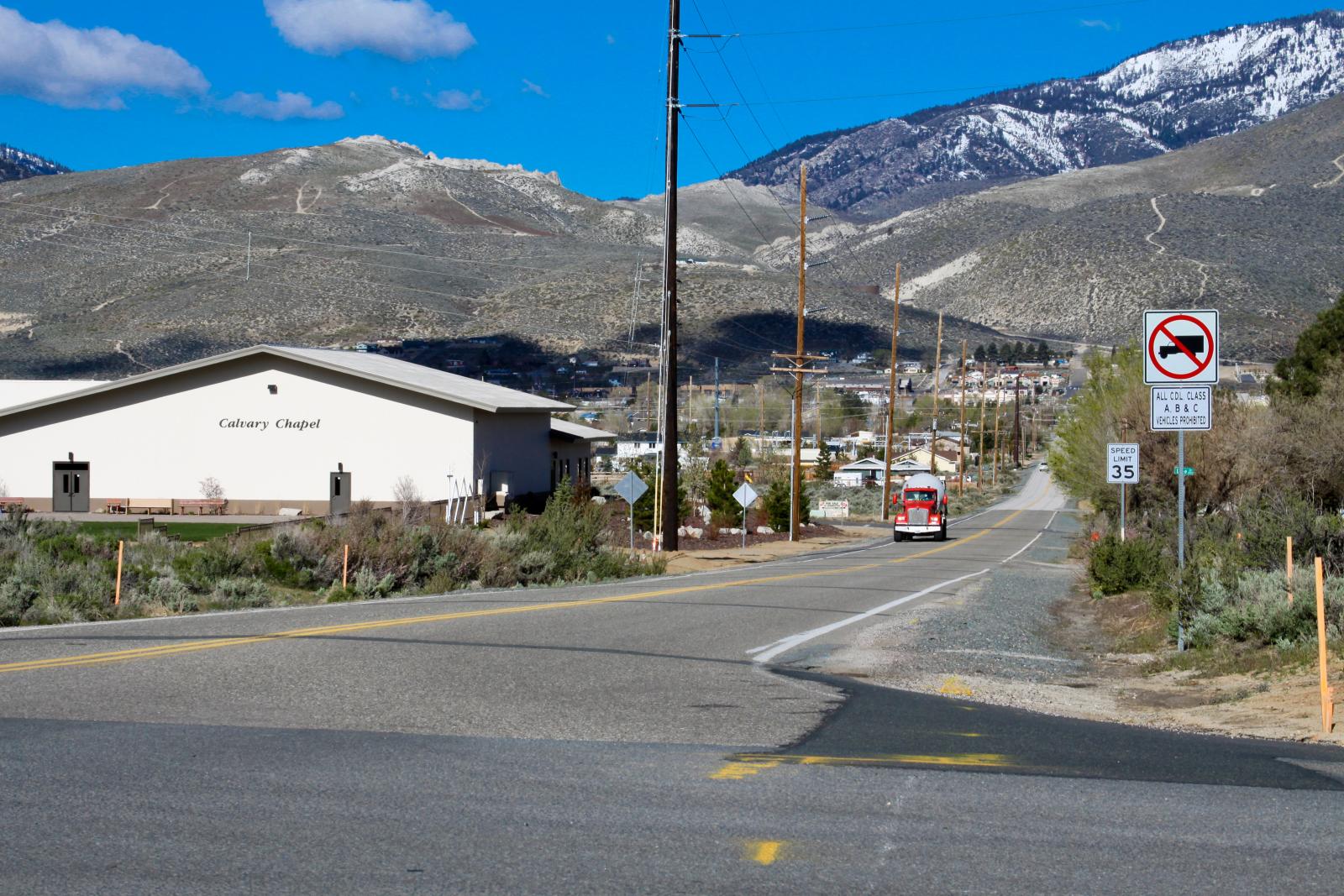 Clearview from the other side. 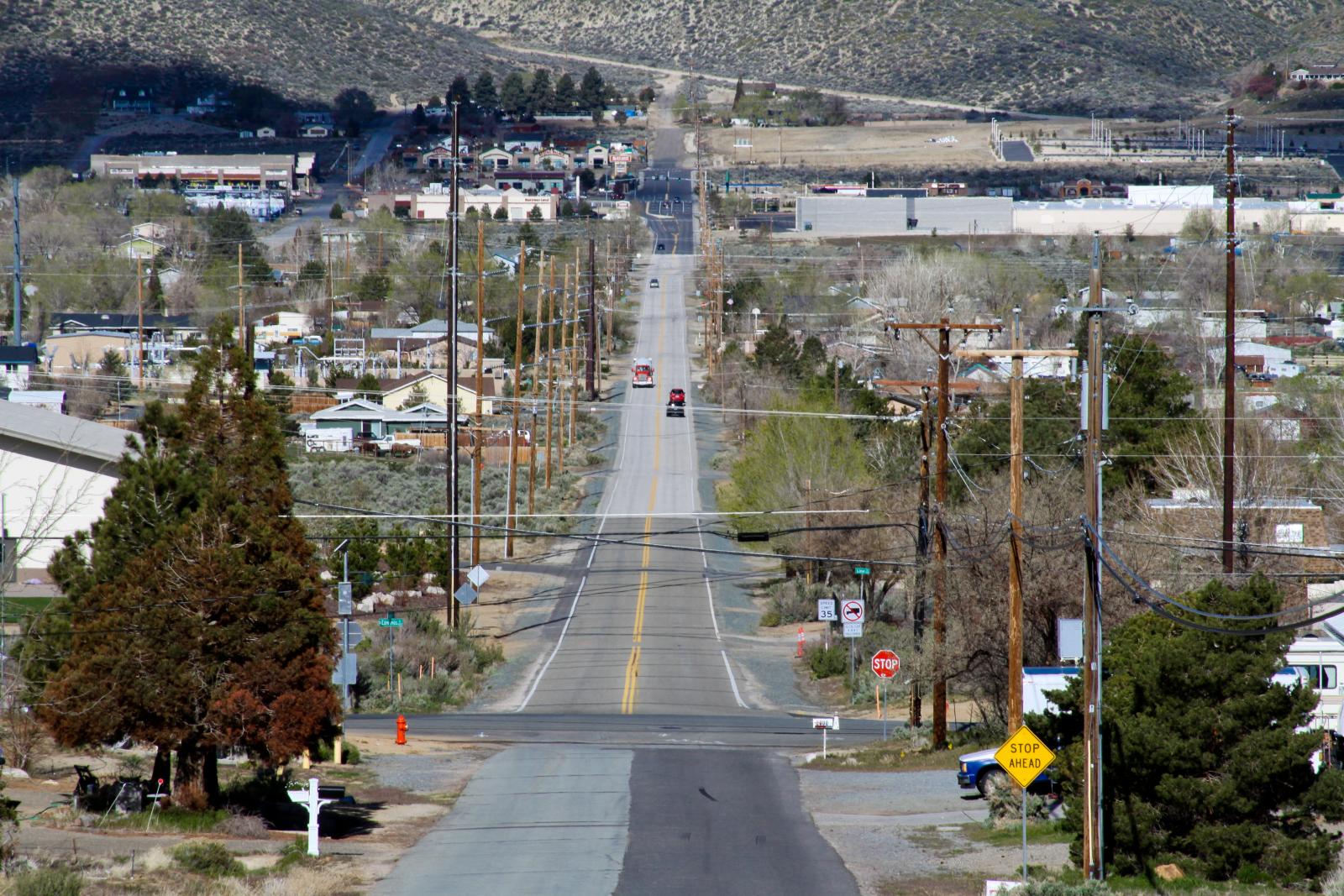 One last look at Clearview from up on the hill. Construction will be just on the opposite side of Edmonds.