Last week I wrote about the route that the new V&T is taking through Mound House, kind of hugging the hills and sweeping around the outside of town. But what about the first time the V&T came to town, 140 years ago? Back then there was no civilization here, so they could cut the tracks right through the middle of the valley. Here you can see the rails plowing up towards the Comstock, and the town of Mound House which sprung up around the tracks.

After 1880 there were two railroad lines in town. The V&T, which passed through on the way to Virginia City, and the Carson and Colorado, which terminated here and headed south to Hawthorne and the Owens Valley. This made Mound House a busy transfer point between the two railroads, especially after 1900 when gold and silver were discovered in south central Nevada. But that traffic dried up when the Southern Pacific built a bypass track out by Fallon. The rest of the V&T traffic dried up as Virginia City nearly became a ghost town in the early 1900s, and in 1938 the line through Mound House was abandoned. 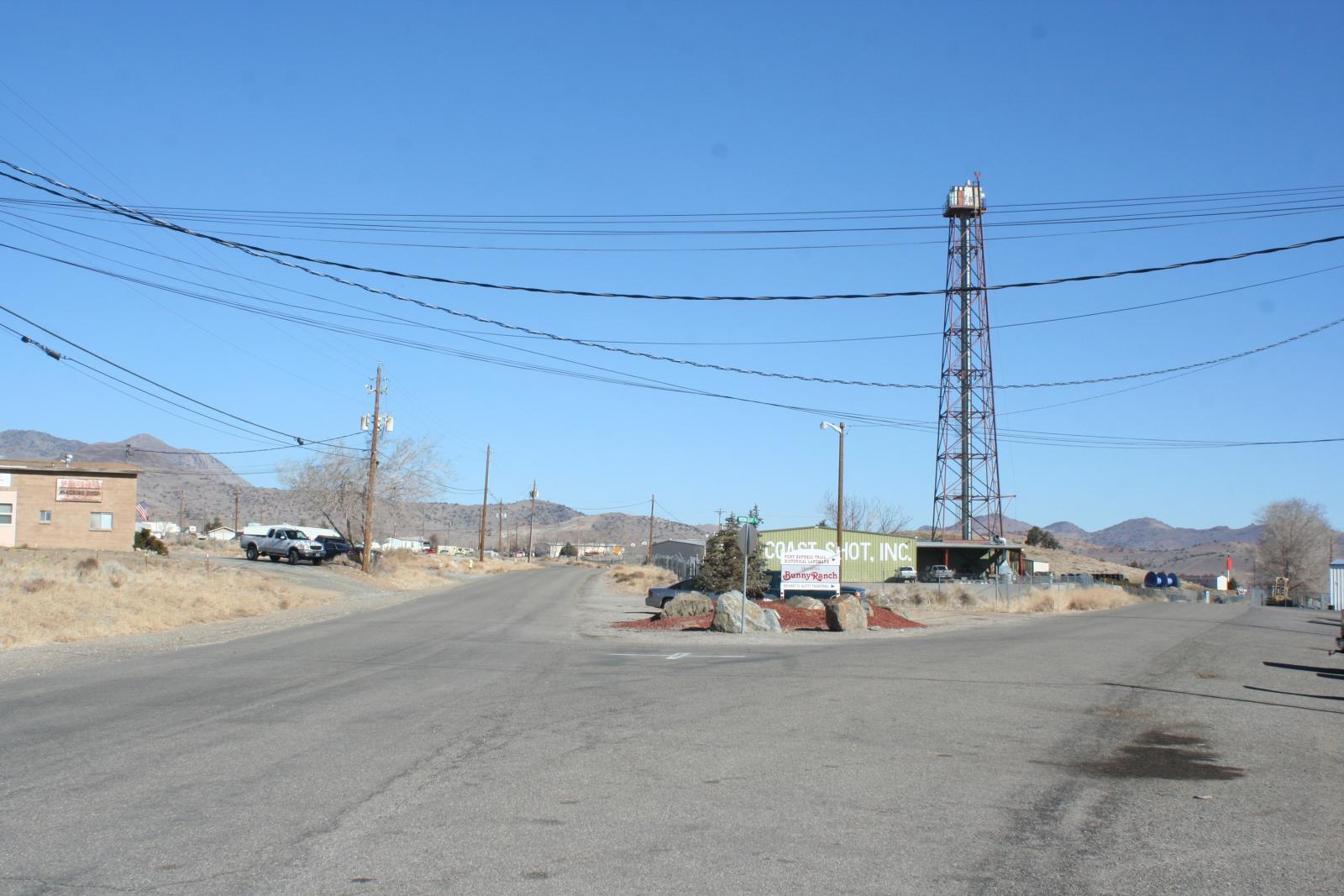 Above is the Mound House depot site today. An ammunition manufacturer is on the site, and just a short ways down the road to the right is the famous Moonlite Bunny Ranch. But the railbed has been preserved, paved over as Red Rock Road. This depot area is the subject of Then and Now articles #40 and #41. 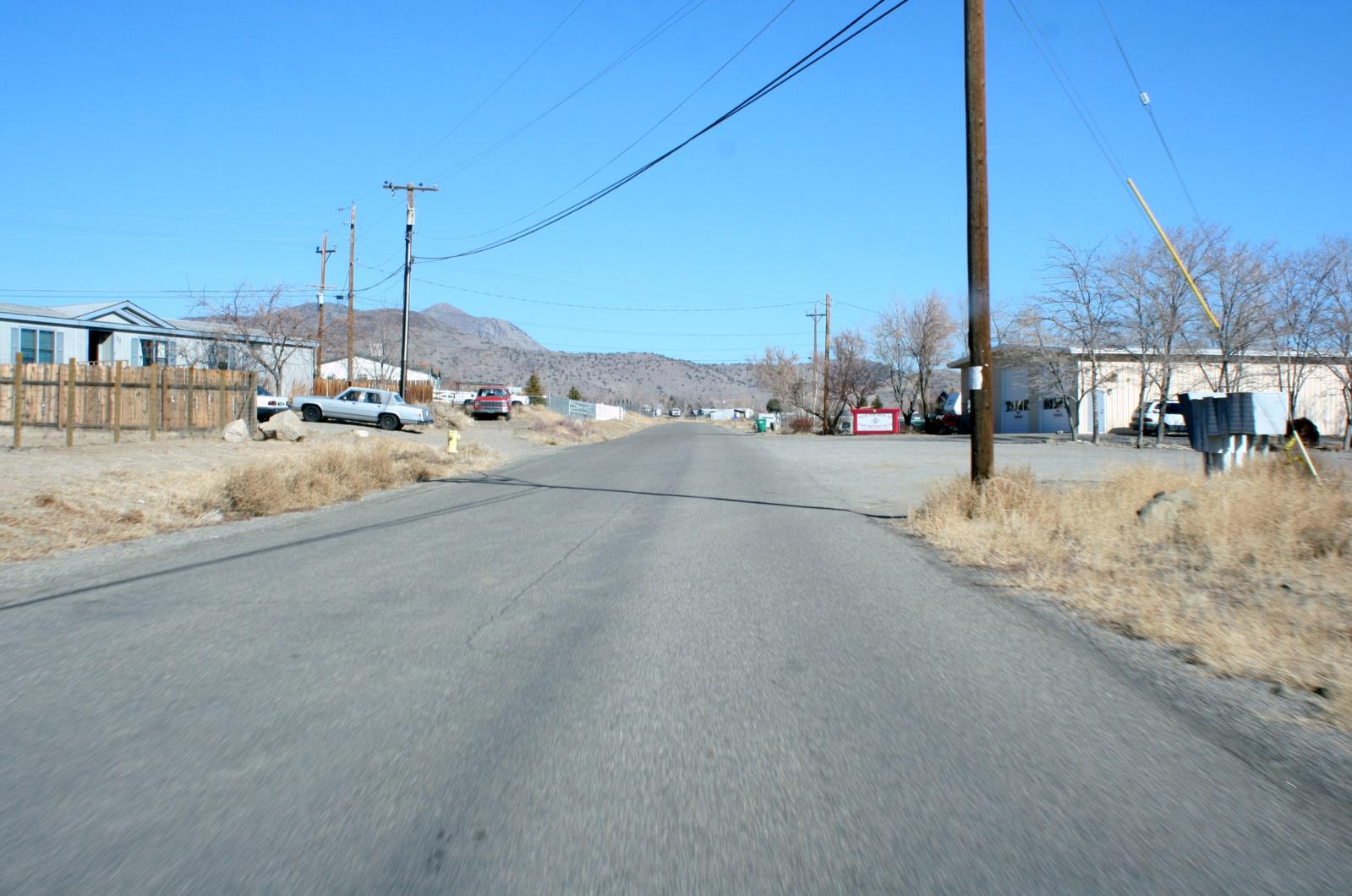 Further up Red Rock Road is a small residential area and fire station; the road here is still following the grade of the original railroad. Houses have been built here, where it used to be all desert when the steam trains came through. 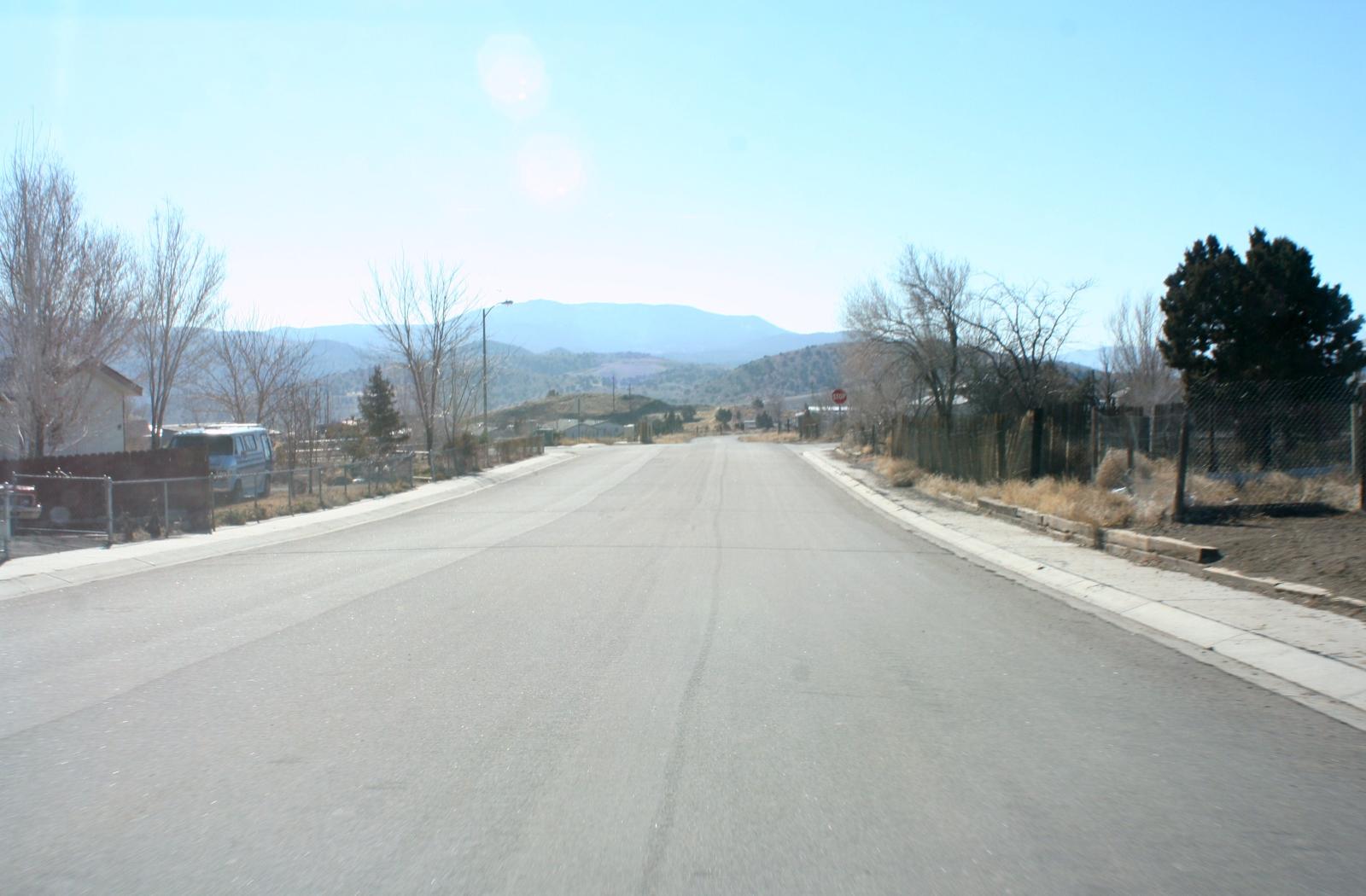 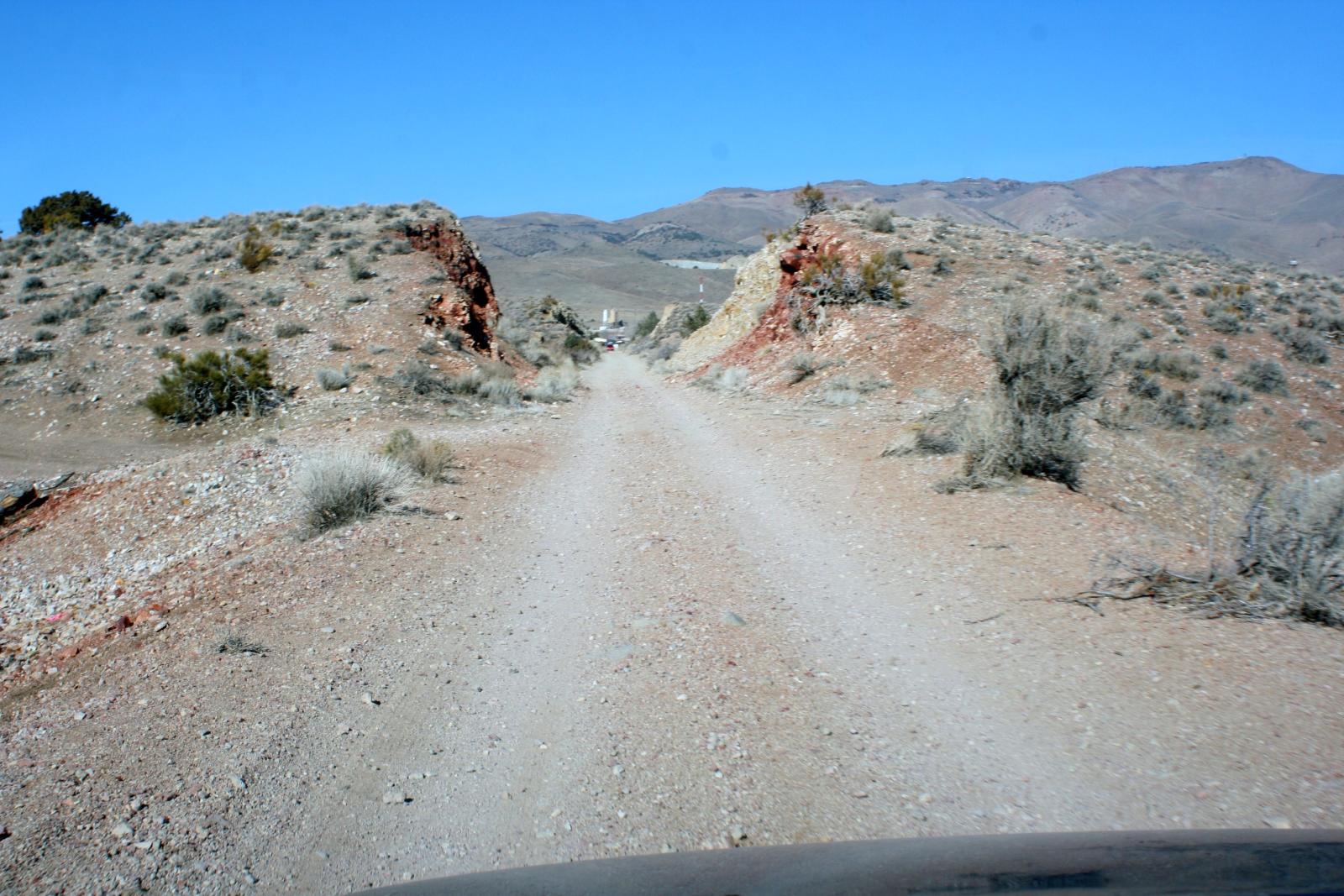 If you turn around and go to the south, the railroad grade still exists there too. On the south side of Hwy 50 it’s known as Highlands Drive, and for the first few blocks it’s nice and paved as it passes through a residential neighborhood. But soon it turns to dirt and gets rocky, and it starts passing through the old cuts that were made in the hills. 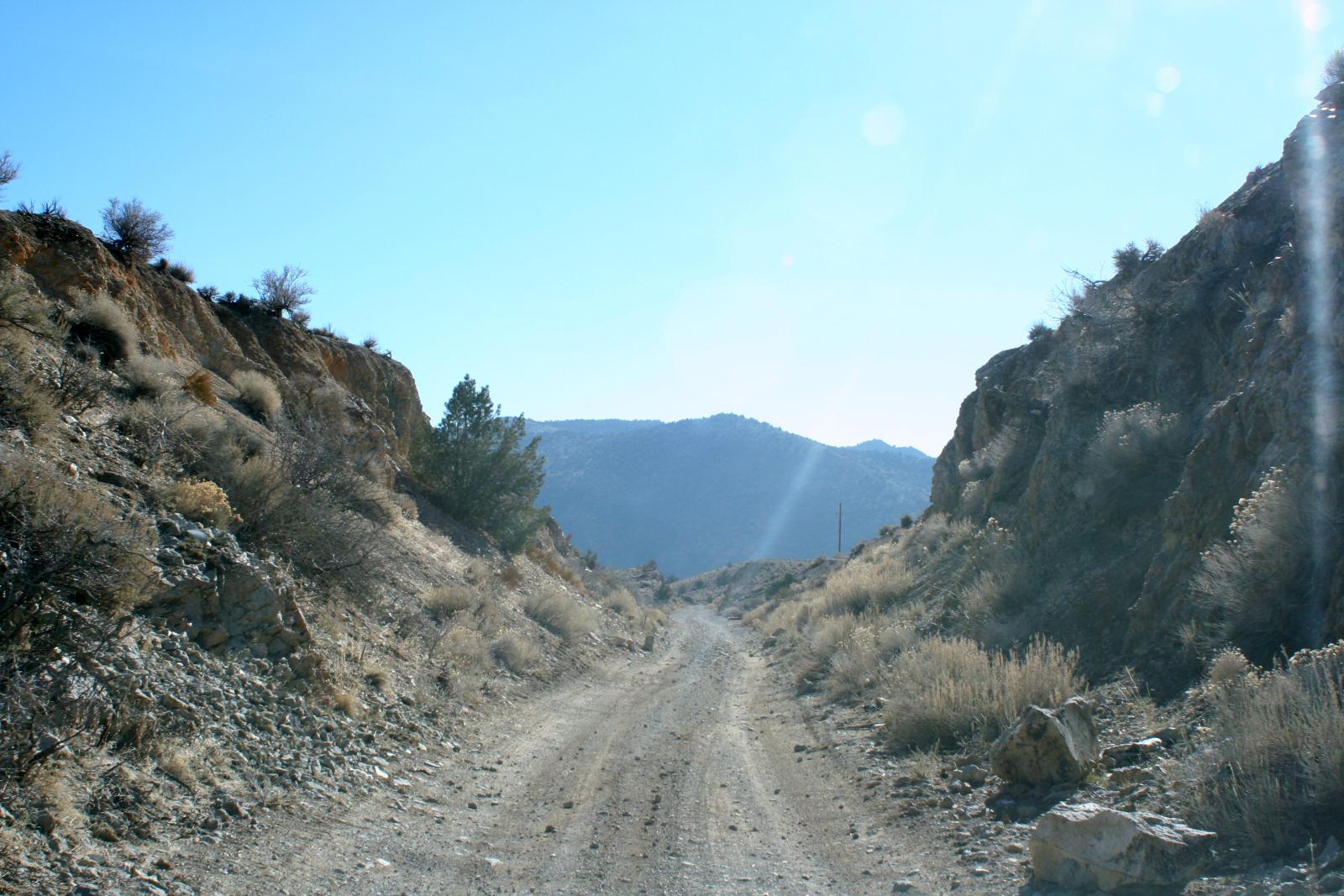 This was the route the V&T took from Mound House down to the Carson River. Along this stretch the tracks were able to go in a straight line, just plowing through the hills. These cuts are original back to 1868, and the road here is still pretty passable. My 2-wheel-drive car had no trouble, but there are a few large rocks you might want to drive around. 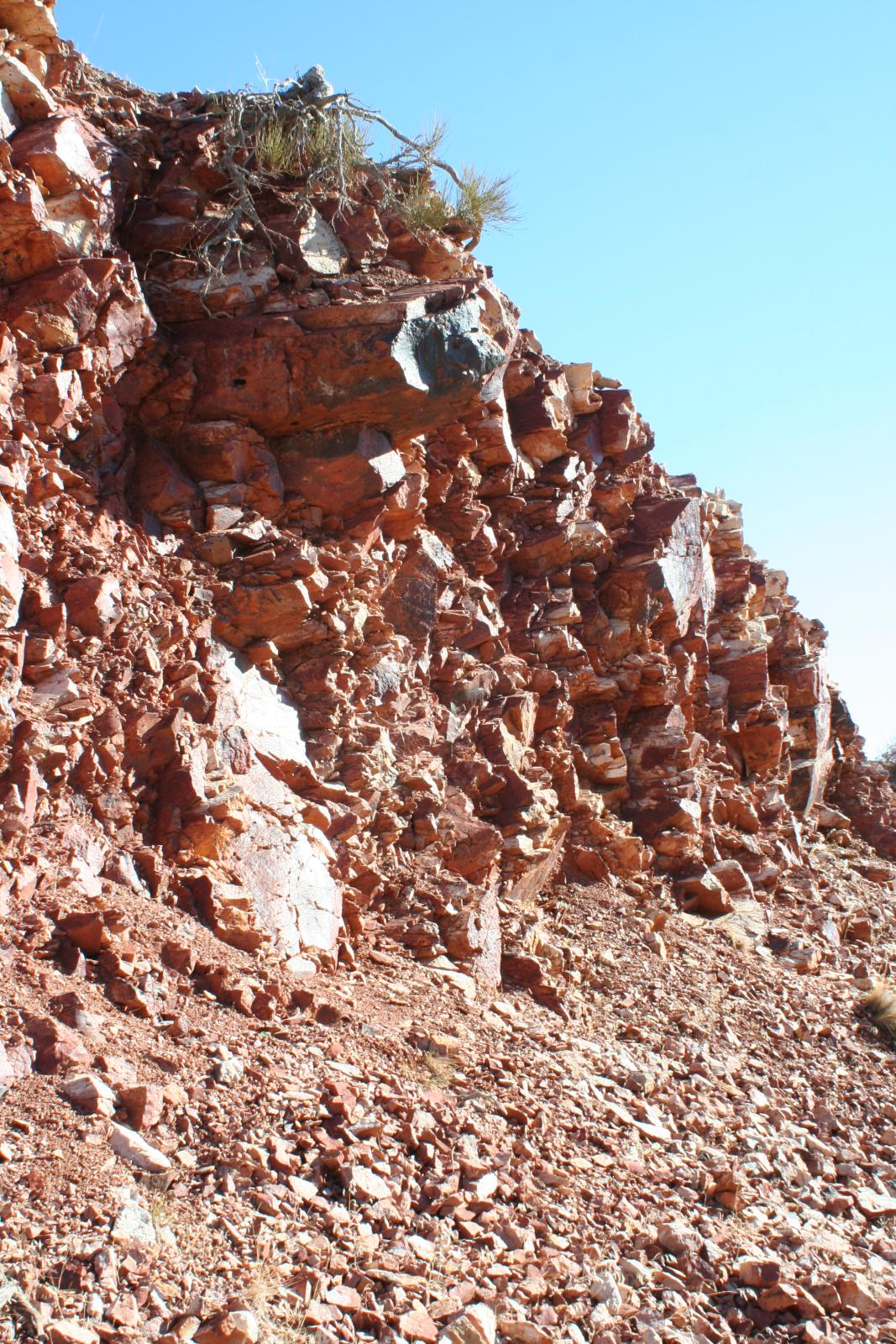 Jagged outcroppings along the railroad grade. 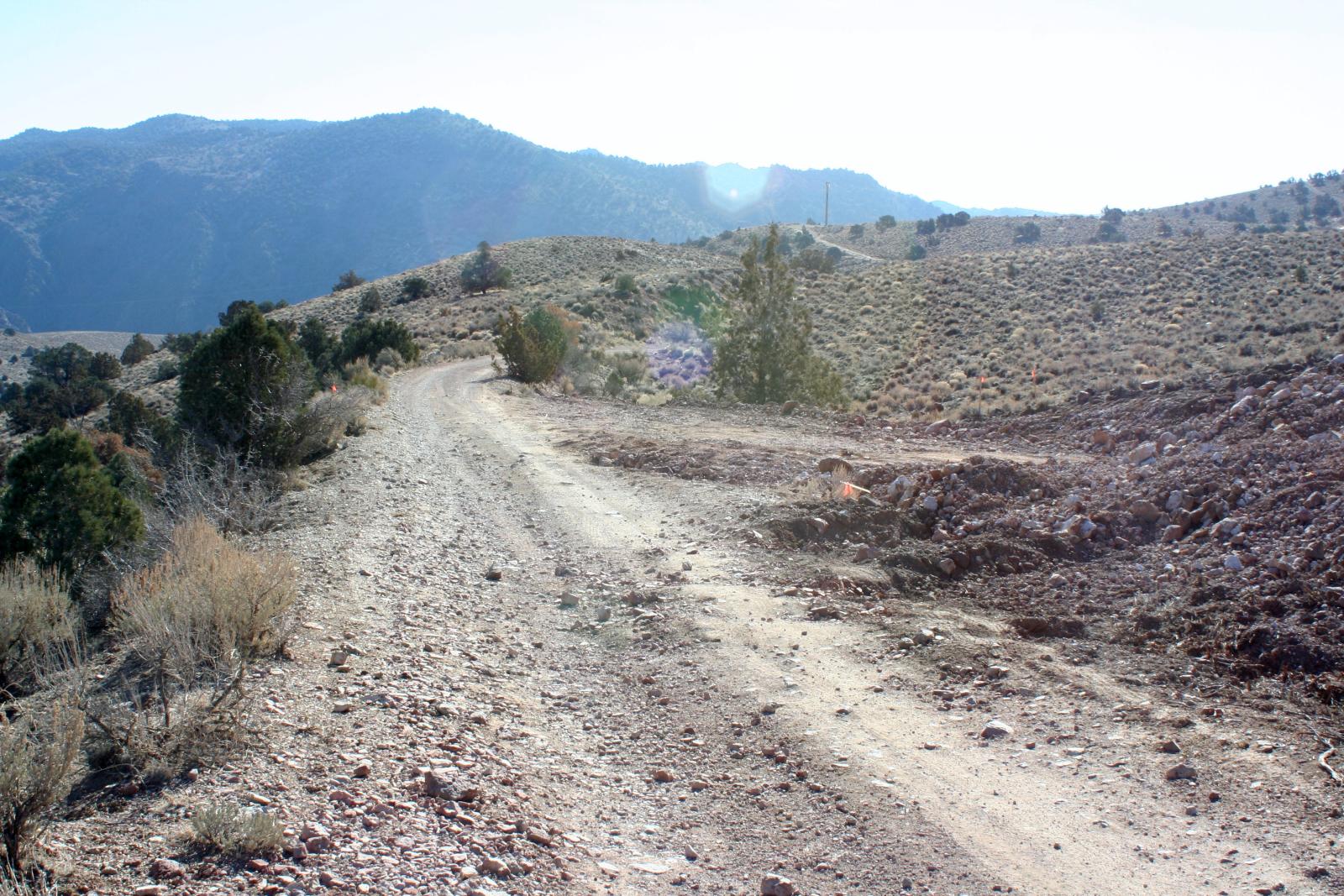 Eventually Highlands Drive brings us here. The grade here starts to curve and begins winding its way down to the Carson River. We’ve been here before, this is the spot where the new V&T is going to rejoin the original grade to finish the trip to Carson. Off to the right you can see where the earth has been disturbed recently during the construction of the new line. This is where Phase 3 of the reconstruction will pick up, and follow Highlands Drive around that bend up ahead. The road is still passable past this point, but I didn’t go any further. That’s the topic for another article.

Mound House doesn’t quite have the history that you’ll find in Carson City or Virginia City, and what there was has been mostly erased. But if you look close, you can find traces of it here and there, remnants in the landscape of the railroad that used to cross these lands, and that will again one day soon.