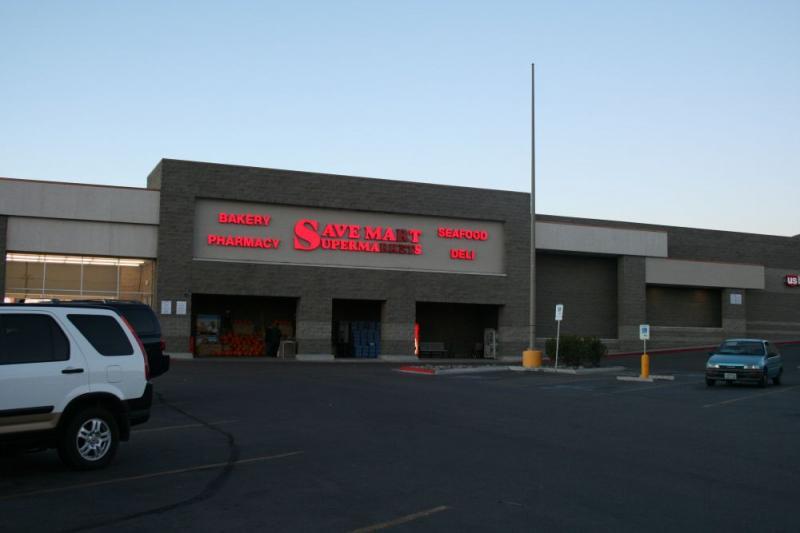 So late last week all three of the Albertson’s supermarkets in town shut their doors for a day or two, and when they reopened they were sporting a new name inside and out – Save Mart. Apparently this deal has been in the works since February, but of course I knew nothing of it because I’ve been letting my papers pile up instead of reading them. Thank goodness for the Nevada Appeal’s RSS feeds, or I wouldn’t get any news at all.

I’m going to have to give it some time to see if this is a good thing or a bad thing. because first of all, the name is putting me off. Save Mart sounds like some kind of bastard union between Pic ‘N’ Save and KMart. Seems like it would have been better to revive the old Lucky’s brand, which was also purchased as part of the Albertson’s deal, and open the stores under that name. Apparently they’re doing this in the Bay Area, but not here. Lucky’s has a history in Carson City, at least for those of us who have been around long enough to remember the old store out where the freeway sits now.

Of course the Albertson’s name goes way back in Carson City too. Before we had the three stores we have now there was one, located in the Silver City Mall at Carson and Fairview. Office Depot is in the building now, which was actually the only part of the Silver City Mall that wasn’t demolished. And speaking of the Silver City Mall, apparently the SavOn in the parking lot there being rebranded as CVS was part of this deal too. That SavOn originally was located right next door to the old Albertson’s, where PetSmart is now, and it was called Osco Drug way back when. But Osco became SavOn, SavOn moved to the corner, and now SaveMart/CVS has bought Albertson’s/SavOn and renamed them all. And this is probably more than you wanted to know about the sordid history of Carson City’s supermarkets. Hey, remember when there was a Safeway downtown?

So the other big deal that SaveMart is bragging about is the fact their their stores don’t have any club cards, and so you’ll notice an instant decrease in price when you go shopping there. They have signs all over the place, comparing the Alberton’s price to the SaveMart price, and showing you how much you’ll save. But I bet they’re comparing the Albertson’s regular price to theirs, not the club card price. Plus, Albertson’s only started using club cards a few years ago, so it’s not like they’ve been around forever and SaveMart is now toppling a regime.

So the era of SaveMart has begun, and time will tell if our lives change for the better or for the worse. Albertson’s was always fourth on my list of supermarkets anyway. I only went there if the items I was looking for weren’t carried at Trader Joe’s, if I didn’t want to tackle Wal*Mart that day, and if Raley’s was too expensive. So, less than once a month. I don’t think this change will affect me. Except that the SaveMart logo is a lot uglier than the Albertson’s one, and now I have to look at it everyday.

And for god’s sake, you’ve been open two days. Fix those burned-out bulbs.