Some time ago I was expressing how desperately I hoped they would get rid of the turquoise on the old Lucky Spur building as it underwent its transformation into Doppelgangers Bar and Grill. Well, I got half my wish. The turquoise on Carson Street still remains, but it has been banished from the side entrance and sign on Proctor Street. Doppelgangers opened this month, but I haven’t had a chance to try out the food yet. I only ate at Stew’s once, and I can remember it was kind of a grim experience. Hopefully things are better with the new owners. You also can see from this photo that the most abused sign in Carson has gotten yet another facelift. This time it shed the turquoise, and the Stew’s lettering, and now just barely manages to squeeze in the word “Doppelgangers”.

Also today comes the news that Alan Adams, who owns Doppelgangers and also the Carson Nugget, has bought the old Stewart Title building directly to the south across Proctor Street from the Lucky Spur. Adams says he has no idea what he’s going to do with the building yet, but please please please let it involve some major remodeling and a facelift. Because damn: 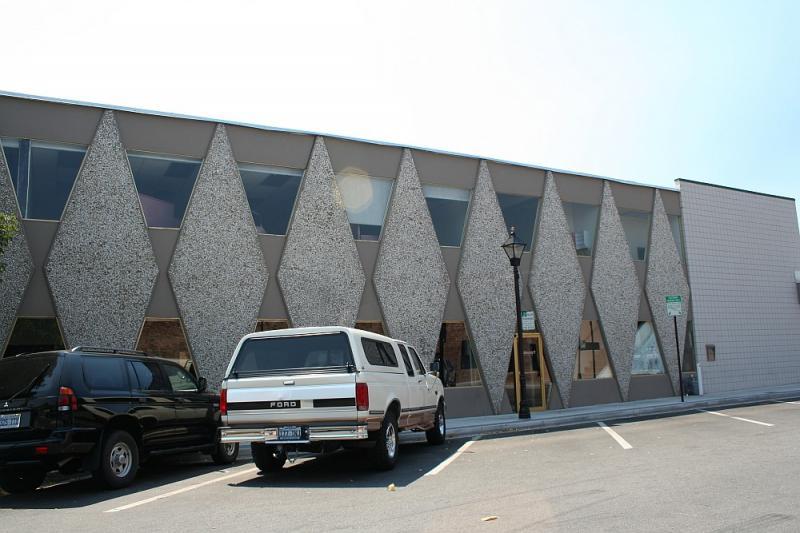 These diamonds haunt my nightmares.

This building was put up in 1962 as Security National Bank, and a comtemporary newspaper article praises it as being “modern in every respect.” But remember, this is the 1960s we’re talking about, when “modern” was a synonym of “ass-ugly”. If Alan Adams can be the one to make those diamonds go away, he will be the town hero.

Here’s what was at that corner before the bank.

The Eagle Market and Tim’s Liquor House shared the corner building. Next door is Sprouse-Reitz, which moved from downtown into the Carson Mall before closing completely in the 1990s.

The Camels of Curry Street