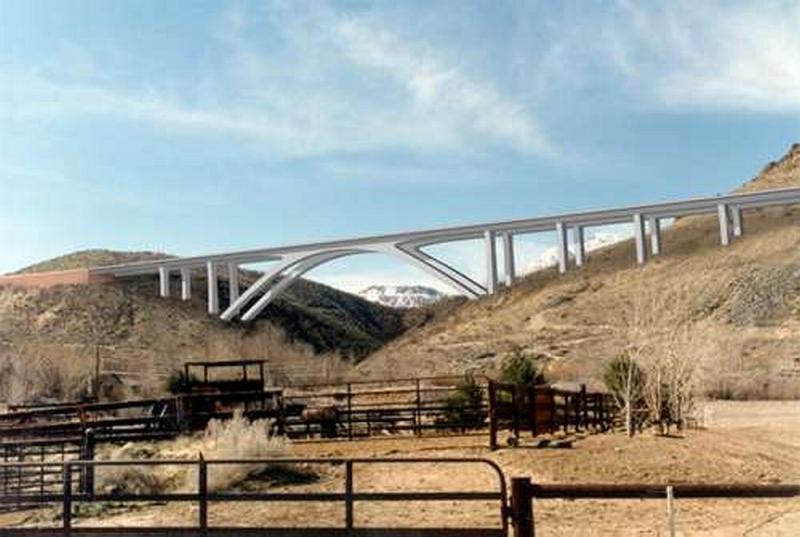 Construction is starting back up again on the I-580 freeway! This long-fabled project, the missing gap between the Reno and Carson City freeways, has been slowly coming together over the last few years in the hills south of Reno. But work stopped in May of 2006 over concerns by the contractor that the freeway’s centerpiece, the 300-foot-high Galena Creek Bridge, couldn’t be built safely. Kind of makes you wonder why they started building it in the first place. Maybe they didn’t know what the winds are like around here, which means they didn’t talk to anyone or spend a day in the Washoe Valley before they took the job.

So the unfinished bridge pillars have been sitting there ever since then, all alone and forgotten. But after scrambling for most of the year, NDOT found a new contractor to finish the job, Fisher Sand & Gravel from North Dakota. Yesterday was their first day of work on the project, and while they’re just moving equipment in and getting their offices set up right now, they hope to get out there and start building soon. The bridge itself will be built by a subcontractor, C.C. Meyers or California, the same company that built the new Lake Natoma Crossing bridge in Folsom. They seem confident that they can get the whole freeway finished, and they’ve given themselves 1,000 working days to do it. Which is a nice round number, but that still comes out to four years, or roughly 2011 before any traffic actually drives on the road.

You can watch progress on the bridge via the official webcam, which has been dutifully running and capturing images even though no work has been taking place on the site since last spring. And the project as a whole has a website at www.freewayextension.com, where you can keep up with the latest news.

Of course, it didn’t have to be this way. I’ve heard there were several possible ways they could have routed the freeway through the mountains, and NDOT chose this particular alignment mostly because they were excited about the chance to build this bridge. You see, when it’s finished the Galena Creek Bridge is going to be the longest concrete span in the world, or something like that, and will bring a lot of engineering prestige to Northern Nevada. So even though the freeway could have built cheaper and faster with a smaller bridge in a different location, NDOT decided to go big, and now we’re all paying the price. Hopefully the bridge is worth it.