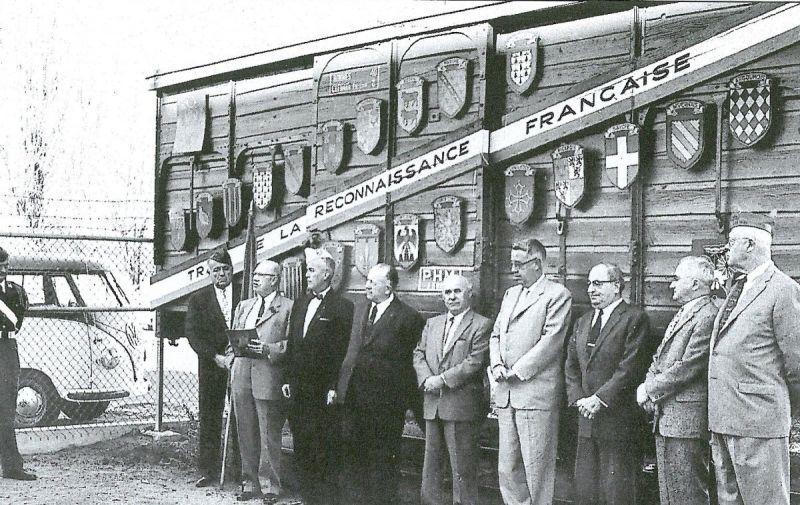 These nine fellows are taking part in a ceremony at the Nevada State Museum in December 1958, celebrating the “Merci Boxcar” standing behind them. I don’t know the exact occasion, but the car is probably being put on display at the museum, nine years after the state received it as a gift from the country of France in 1949.

This boxcar was one of 49 identical cars given to the U.S. that year. There was one for each state in the nation, plus an extra one for Hawaii and Washington D.C. to share. The reason behind this rather peculiar show of generosity by the French people goes back a few years, to the aftermath of World War II. After the war hundreds of villages in the French countryside had been devastated by the fighting. In a nationwide show of support for the French people, thousands of Americans donated supplies such as food, fuel, medicine, and clothing. There was enough donated to fill 700 railroad cars, and this “American Friendship Train” was sent overseas in 1947 to help out a people in need.

The people of France appreciated America’s generosity so much that they felt they should reciprocate and give something back. But since it didn’t make sense to give back any of the supplies they had just received, they instead gave up their own personal belongings to send as gifts to America. They rounded up boxcars of their own, old “40 and 8” cars that had been built in the 1880s (the same kind used to transport American G.I.s during the war; they were called “40 and 8” because they could carry 40 troops or 8 horses). And they sent the cars from town to town, stuffing them full of dolls, jewelry, pottery, paintings, letters and other gifts. In total over 52,000 gifts were collected from the citizens of France! The 49 boxcars, by then known as the “French Gratitude Train” or the “Merci Train”, were loaded onto a ship and sent back over the ocean in February of 1949. They arrived in New York harbor and were loaded onto flatcars to begin their journey all across the continent.

Nevada’s boxcar finally arrived in Carson City to much fanfare on February 23, 1949, being pulled by V&T engine #26. 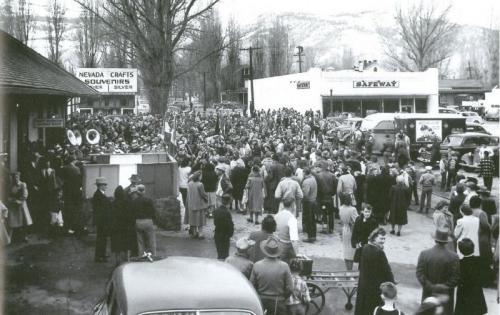 The crowd waiting for Nevada’s Merci car to arrive. 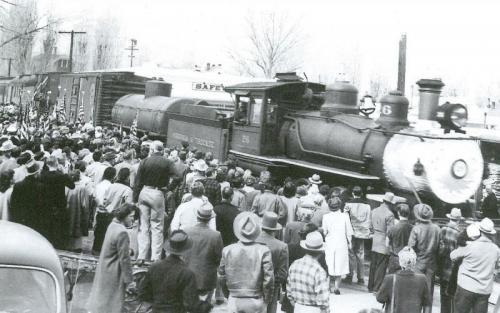 Most of the Merci cars were received with excitement in their respective state capitals, and the gifts proudly displayed. A number of wedding dresses were included in the collection, and some lucky brides got to walk down the aisle wearing a lovely French gown. Antiques, toys and paintings were passed around, and sent on tours from town to town. But soon the excitement wore off. The boxcars themselves couldn’t be used on American rails; they were the wrong gauge, and too old to be useful. The gifts quickly lost their novelty, and the ones that weren’t grabbed by museums were lost, never to be seen again. Slowly the Merci cars were forgotten.

Today many of the cars still exist, usually in the care of a historical society or museum. Some of them have been stuck in a secluded corner of a park somewhere, behind a fence and under a makeshift canopy. Some have had their gifts and decorative shields stolen, and been banished to a siding, left to fend for themselves in the elements. Decades of wind, rain and sun have taken their toll on the wood, which was old already when the cars were sent to America. Six of them are missing, presumed lost to fire or neglect. But many of them have been lovingly restored, Nevada’s among them.

Nevada’s Merci car first went to the State Museum. The gifts went on a tour of the state and were then added to the Museum’s collection, where they still are today. The car itself was put on display at the museum for a while (the ceremony in the “then” picture), then transferred to the Railroad Museum after it opened in 1980. I remember seeing it there in the 1990s, sitting on a short piece of track, with peeling paint and missing shields. Neglect was starting to take its toll.

Finally a restoration effort was started, and in 2002 it was finished. The Merci car is now restored to the original condition it was in when it arrived in Carson City nearly 60 years ago, and it is on display inside the Railroad Museum’s annex.