The Reno Gazette Journal has always had a small presence in Carson City, with the publication of the “Carson/Douglas” section in their newspaper a couple of times a week. But a month or two ago they decided to get serious and start publishing a tabloid newspaper just with Carson City news, called the Carson Times. 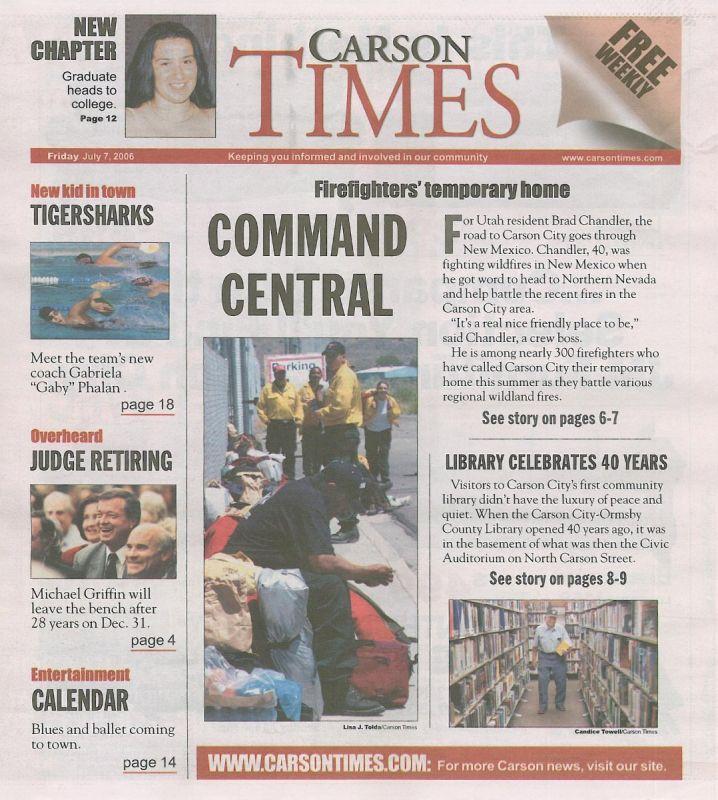 Now instead of having to buy the RGJ, you can find this Carson Times, which usually runs around 30-40 pages, for free in newsstands all over town. It comes out every Friday, and is full of local news and stories. The RGJ has even opened a bureau here in Carson City that the paper is produced out of; it’s almost like Reno finally woke up and realized that Carson isn’t this little town of 4,000 people anymore.

On the one hand, this is really nice to see, and it means Carson is growing in importance. But on the other hand, it shows that the only thing newspaper people are thinking about is creating more newspapers. It’s another example where they have to produce paper; they have to get the news to you on paper. And it’s another example of where the Web seems like little more than an afterthought. There is a companion website, www.carsontimes.com, but instead of creating a whole new site for it, they just redirect you to the Carson section of rgj.com. And it’s a pretty grim website, nothing more than reprints of the stories that were in the paper. And there’s also a contest on there, a contest that expired on July 3rd.

This is the same hole the newspapers always fall into. They see their websites as nothing more than an electronic version of the paper. The newspaper is their baby; it’s what they spend all their time caressing and devote all their attention to, and they make sure the pages are laid out just right, and they cram every inch full of stories and ads and public announcements and calendar items. There are people who check to make sure it’s polished and ready to go out, and they spend thousands of dollars on paper and ink and delivery people just to make sure that their finished product ends up in the hands of the customer in a perfect little bundle.

Then what do we, the customers, do? We spend ten minutes reading it, and after that we toss it aside. We cut it up, we crumple it and throw it in a corner, we use it as kindling to start fires, we lay it down to protect the floor when we paint, we chuck it in the trash with the coffee grounds and spoiled milk. If they’re lucky, we recycle it so they can get it back and print on it again. But what we don’t do is save it. Unless it’s an article about our kids, or something like the front page from September 12, 2001 (who doesn’t have one of those tucked away?), we get rid of it and forget about it. It’s nothing to us; it’s less than nothing. It’s yesterday’s news, just another piece of paper cluttering up our lives, and we can’t wait to dispose of it.

Compare this to the Web, where an article online can live forever. It doesn’t turn yellow, it doesn’t get lost in the middle of a stack in the garage, it’s always there, just a click away, and always looking as fresh and new as the day it was published. Let’s say I wanted to show you the Nevada Appeal from 9/12/2001. I’d have to go into my house, I’d have to remember exactly where I put that paper, I’d have to dig through a pile and pull it out, then we’d have to be careful reading it because we don’t want to rip the pages, then we’d carefully put it back where it was before. So much work, so much time, and plus you’d have to come over to my house to see it. But what if I wanted to show you the article that was on the front page of that paper? Here it is. Took me about 45 seconds to find it on the website, takes you about half a second to click it. News on the web lives forever. News on the web can be valuable, and deep archives that go back for years can be a huge traffic generator for a newspaper, which leads to page views and advertising revenue.

News on the web is also much more immediate. A big problem with newspapers is that, by design, they’re full of yesterday’s news. You wake up in the morning, go out to the curb, and find out what happened yesterday. Not what will happen today, not what’s happening right now, but what happened yesterday. This paper is brand-new, and it’s already out of date. Might as well put yesterday’s date on it, not today’s. But a website can be updated in seconds. It can always have the latest news, the most up-to-date reports. Photos can be uploaded as soon as they’re loaded off the memory card. Stories can be posted as fast as the reporter can type. The website comes alive, and becomes a reflection of the world they way it is right now

Based on all this, it looks to me like electronic news on the web is much more valuable than news on paper, both to the company producing it and to the person reading it. So why, then, do so many newspaper websites suck? It seems like all they do is buy a prepackaged CMS, throw together some basic templates, and hire someone to copy and paste yesterday’s articles into the system. If you’re lucky you get comments, and if you’re really lucky you get a “Breaking News” section where things like fires and national disasters can be reported. But for the most part, a newspaper website is nothing more than an online version of yesterday’s news, that matches the paper version of yesterday’s news you’re already holding in your hand. How disappointing.

So what can be done? I’m not a newspaperman, by any means, or a “Journalist” with a capital J, but it seems to me like the whole system is backwards. Instead of the paper being the primary product, the final result that everyone is focused towards creating, the website should be the main product. The front page should be a blog, updated regularly throughout the day with the latest stuff. Stories should be pushed onto the website as soon as they’re finished. It should be a vibrant, living document, the result of an interactive newsroom that’s trying to communicate the way the world is right now. It’s called news; everything on it should be new. And then, since many people do enjoy that ten minutes they spend with the paper each morning, the newspaper can still go out the door every morning like usual. But instead of being the star of the show, like it is now, the newspaper would be a daily summary of what stories and topics were hot on the website yesterday. It would be a “catch-up” edition, for people who don’t read the website or who missed it for a day.

It seems to me the main product of a newsroom should be news. And that news should be delivered in whichever way makes the most sense. 20 years ago, collecting all the news from one day and printing it into a bundle of paper was probably the way that made the most sense. But today, in 2006, it no longer is. Delivering that news in real-time to the readers’ desktops makes the most sense. But the people in charge of the newspapers still see the paper itself as the main product, like they’re not able to separate the news, which is what they’re really creating, from the paper, which is just a way to get the news to people. The newspaper industry all over the country is having trouble because they haven’t realized this yet. Just the fact that it’s called “the newspaper industry” shows you what the problem is. They think that what people want is a newspaper; they’re only half right. What people want is the news; the paper part is an annoyance that is quickly becoming unnecessary. But these companies keep trying to cram it down our throats and toss it onto our driveways. And we the readers increasingly don’t want our news in paper form; we want it delivered other ways. Once the industry wakes up and realizes this, and goes through a shift in the way they do business, they’ll find that their problems will go away.

And the RGJ could start by building a real website for the Carson Times.