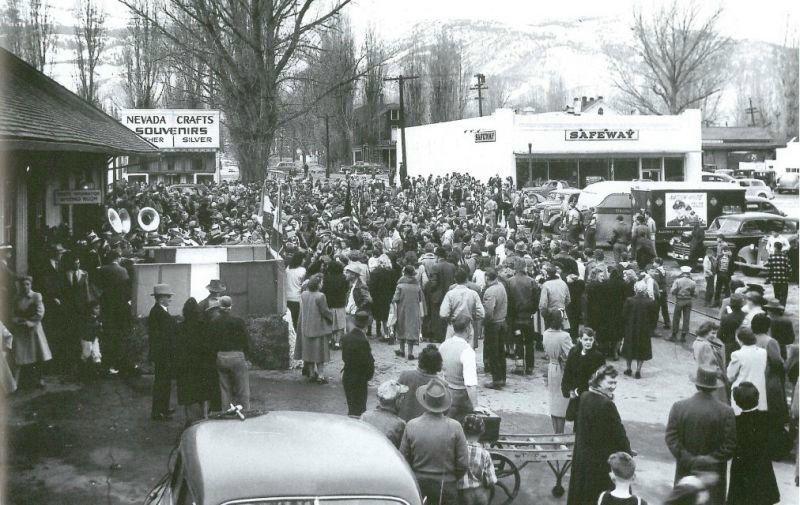 Sam Broyles posted this photograph, one of the Carson City classics that you see all over the place. It shows a group of people clustered around the train tracks on Washington Street, waiting at the depot for an arriving train. In the background you can see the Safeway that used to sit where the City Center Motel is now, and on the site of the Washington Street Station is a curio shop. Sam wondered in his caption why all the people were waiting for the train. It looks like quite a party, Sam noted, with the presence of a photographer and a brass band. He guessed that it was a War Bonds rally, with wartime celebrities arriving by train to drum up business for war bonds. Sam’s close, but he’s off by a few years. It is related to the War, though, in a roundabout way. The date is February 23, 1949, and this celebration actually marks the arrival in Carson City of the Merci Boxcar, on the last leg of its trip from France. The Merci Boxcars were part of the French Gratitude Train, an endeavor by the people of France to say thank you to the United States, both for our accomplishments during WWII and our postwar relief efforts of that battered country. 49 of these boxcars were sent around the French countryside, one for each state plus Washington DC, and at each village they made a stop to be filled up with gifts by the citizens of France. Toys, jewelry, paintings, and thank-you letters were stuffed into these cars, collected from all over France, and then the whole train was shipped across the Atlantic so the boxcars could be distributed to their respective state capitals. The crowd here is gathered to see the Nevada boxcar be pulled into town by V&T Engine #26. Another, more obscure photo shows the same scene minutes later, after the train has arrived and the crowd swarmed the tracks. 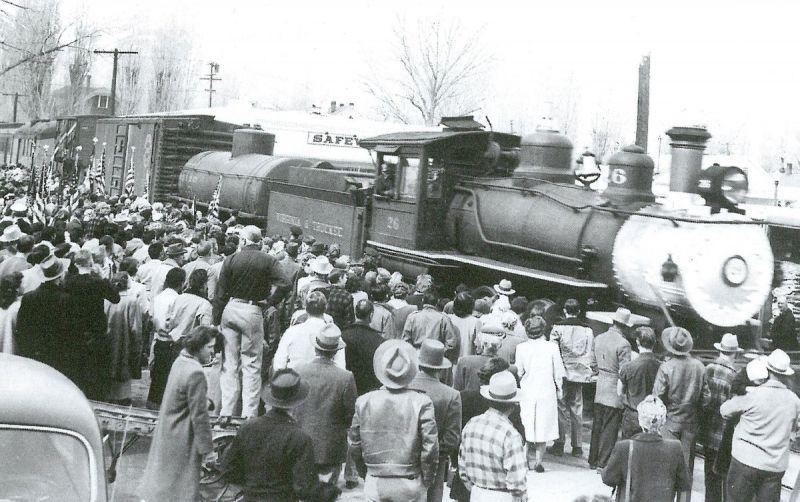 The Merci Boxcar is visible, mounted on the third car back behind the engine. Today the boxcar has been restored and is on display at the Nevada State Railroad Museum.