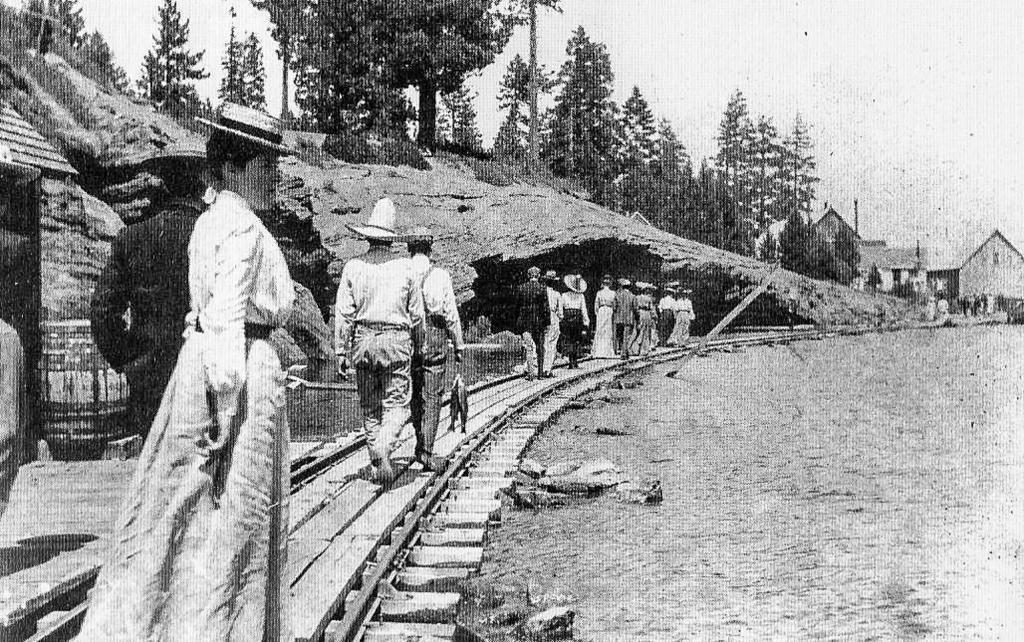 In the 1800s, when Americans first started settling at Lake Tahoe, the main way to get around the lake was by boat. There were no cars, and few trails around the lake, so travel was easiest done from the water’s surface. This led to them having a much different perspective on the lake than we do now. We are used to looking out at the lake from the shore. Back then it was much more common for folks to spend their time looking back at the shore from the lake. From that perspective, the topography of the basin looks much different, and landmarks that can barely be seen from land suddenly become much more prominent. One of the landmarks that really stood out to early residents of Tahoe City were the Swallow Cliffs, or Swallow Banks. Much of Tahoe City is located on a bluff above the water’s surface. At this one spot in the bluff, the underlying volcanic rock has been exposed to form these dramatic cliffs. These cliffs were a popular gathering spot for the Washoe who lived at Tahoe for generations; they would come here to collect eggs from the swallow nests in the crevices. Later it was a popular spot for boaters to admire the scenery. At the turn of the 20th century, the railroad came to Tahoe, and they built a trestle in front of the cliffs to provide a way for locomotives and equipment to pass between the engine house located on the beach to the west and the machine shops located to the east. The cliffs had become an obstacle to be bypassed. However they were still a spot for recreation, as you can see in this picture. Society folks and fishermen alike are out for a stroll along the train tracks, taking in the scenery of the Swallow Cliffs. Boards seem to be placed along the tracks that allow it to be used as a promenade like this. In this photo the water laps at the tracks. One slip could end in an embarrassing and cold plunge into the waters of the lake. 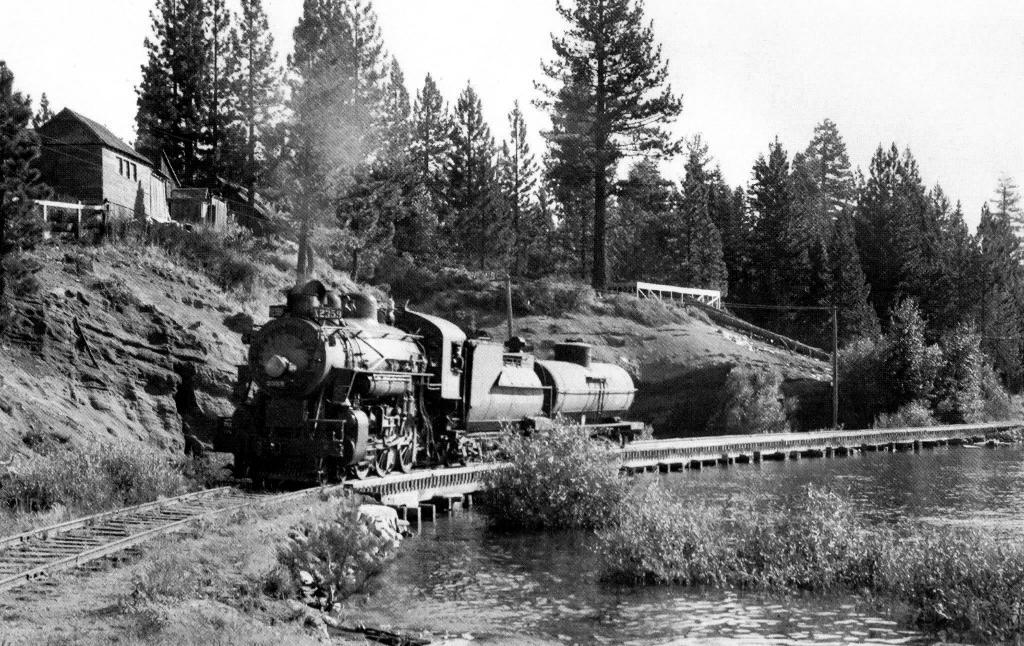 Another view shows this same waterfront trestle being used for the purpose it was designed for, carrying trains. The railroad started in the year 1900 using equipment that had been brought over from the logging railroad at Glenbrook on the east shore of the lake. With the decline of logging in the basin, lumber baron D.L. Bliss saw the writing on the wall and decided to get into the tourism business. He brought the old logging trains across the lake to Tahoe City, and laid down new tracks connecting the city to the Transcontinental Railroad at Truckee. The trains then began hauling passengers instead of lumber, bringing thousands of people a year up to experience the splendors of Lake Tahoe. Originally these trains were pulled by the same narrow-gauge locomotives that had been used on the logging railroad, 1870s-era twin locomotives Glenbrook and Tahoe. By 1925 D.L. Bliss had died and his heirs were no longer interested in operating a railroad, so they leased the tracks to the Southern Pacific Railroad. The SP converted the line to standard gauge so they could bring their larger equipment up to the Lake. One of the SP steam locomotives is seen here traversing the trestle at Swallow Cliffs. One assumes that the SP, being a more professional railroad operation, had put a stop to the practice of letting people stroll along the tracks by this time.

The railroad tracks were removed in 1943. Like happened in many other parts of the country, the trains fell victim to cars, trucks and buses. People didn’t want to take a train to Lake Tahoe anymore, they wanted to drive themselves. Over the course of the 20th century, sediment gathered at the foot of Swallow Cliffs, cutting it off from the lake. The waters no longer reach the rocks of the cliff, even when the lake is at its highest level. Instead a forest has sprung up in front of the cliffs, hiding them from view. You can no longer see the cliffs from a boat like you used to be able to, and the dramatic weather-carved lines of the cliff have been hidden by trees and brush.

However you can still walk along here. Several years ago a wooden boardwalk was built, echoing the railroad trestle that used to pass by this spot. This allows you to get a close-up view of the cliffs, the only view that is possible to get anymore.

When you walk from Commons Beach to the Tahoe City Marina, you are passing by layers of history. Washoe culture, maritime recreation, and railroad history all intersect in this one spot. And nature is reclaiming it to the point where most people probably don’t even realize the cliffs are there. 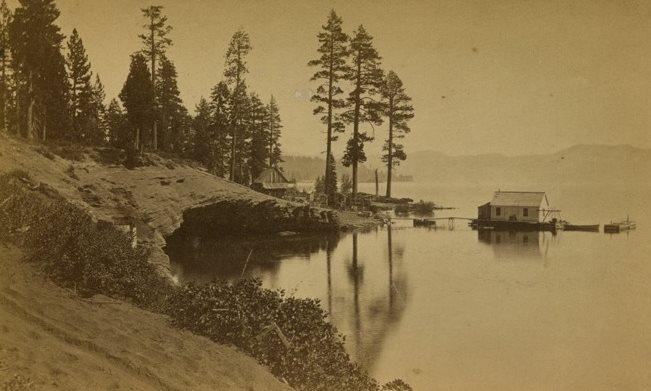 This photo shows the cliffs before any development took place. The waters of the lake were responsible for carving out the caves underneath the overhangs.

Now the water’s edge is several yards away from the cliffs. This photo was taken when Tahoe was near its maximum legal limit, and still the waters don’t come close to the cliffs anymore.

A group of boaters in the late 1800s enjoy a quiet moment in the shadow of the cliffs. A view to the west shows the trestle passing between the industrial buildings of what is now Commons Beach.

A view during one of Tahoe’s low-water periods shows Commons Beach and the trestle, high and dry. The depth of the water around the trestle can be judged better in this photo.