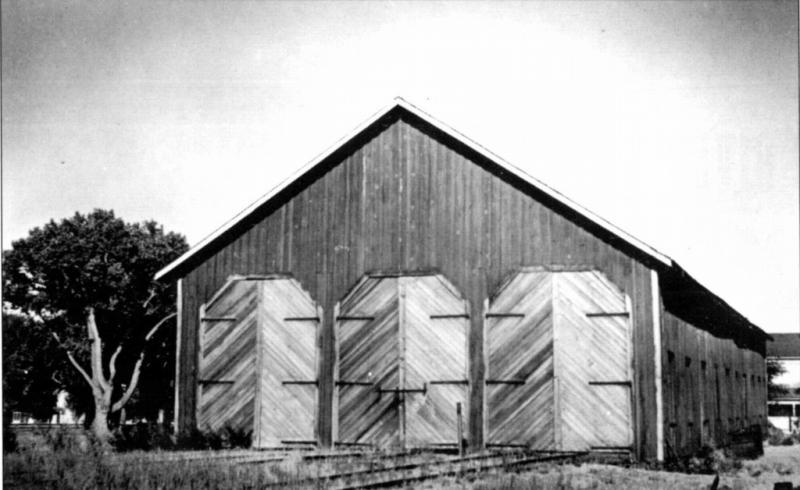 Most everyone remembers or has seen pictures of the old V&T Enginehouse in Carson City, the stone one on Stewart Street that could house 11 engines at once, as well as housing the railroad’s shops and foundry. That stone building was torn down in 1991 to the consternation of many preservationists.

Less known is this smaller enginehouse, which was also in Carson City, just a few blocks west. This three-stall wooden shed supposedly predates the large house on the other end of town. It was located near Mountain Street, right next door to the eventual site of the Governor’s Mansion. The V&T had two main lines through Carson City, parallel tracks running down Washington and Caroline Streets, respectively. Usually Washington Street was used for passenger trains, and Caroline for freight. The two lines came together on the outskirts of town, the Caroline branch curving north to meet the other line. And right inside that wedge where the two lines met, sat this little shed.

This shed was used throughout the life of the railroad. In the declining years it wasn’t needed for storing locomotives anymore, but they would still keep some of the passenger cars in here to protect them from the weather. After the railroad was decommissioned in 1950, there was no need for this structure anymore. It was torn down soon after, probably around the same time the rails were pulled up. Then that whole “wedge”, west of Mountain Street where the Caroline tracks curved to the north, was built over with houses. A house now sits on the exact site where the enginehouse used to be, and to repeat the historic photograph exactly you’d probably have to stand in their backyard. So instead I went a couple hundred yards to the west, here to Sunset Park. This small park has been around at least since the 1950s, and when it was built the northern edge of the park was defined by the old freight line and its junction with the main tracks. Now the northern edge is a fence that borders the backyards of all those houses built on the old railroad land. The fence still runs at an angle, following exactly the curve of the train tracks.