Last time we looked at Donner Summit, we investigated an old stretch of wagon road that had been repaved for automobile traffic, and a particularly harrowing railroad crossing inside a dark tunnel. That old road had been improved for cars in 1909 and basically followed the path of a 40-year-old wagon trail over the mountains. During the 1910s, automobile ownership exploded in popularity, and the old road over the mountains became part of the new coast-to-coast Lincoln Highway. In the interests of safety and managing growing amounts of traffic, something had to be done about that dangerous railroad crossing at the summit. The solution was to separate the road and the railroad. In 1914 they built this, supposedly the first railroad underpass built in the state of California. No longer was there any chance of collision, since the cars and the trains both had their own pathways to pass by each other safely. This new crossing was a few hundred yards east of the old crossing, next to the famous “China Wall”, a retaining wall that the railroad had built across a small canyon. This new crossing also necessitated moving the road, creating a new roadbed and a new approach to the train tracks, which led to the roadway in the previous post being abandoned. In 1914 this work was done and the new alignment opened as part of the Lincoln Highway.

A map showing the path of the old road (dashed line) and the newer road through the underpass (dotted line). A view of the new road snaking its way up to the underpass, and the old road branching off to the lower left. 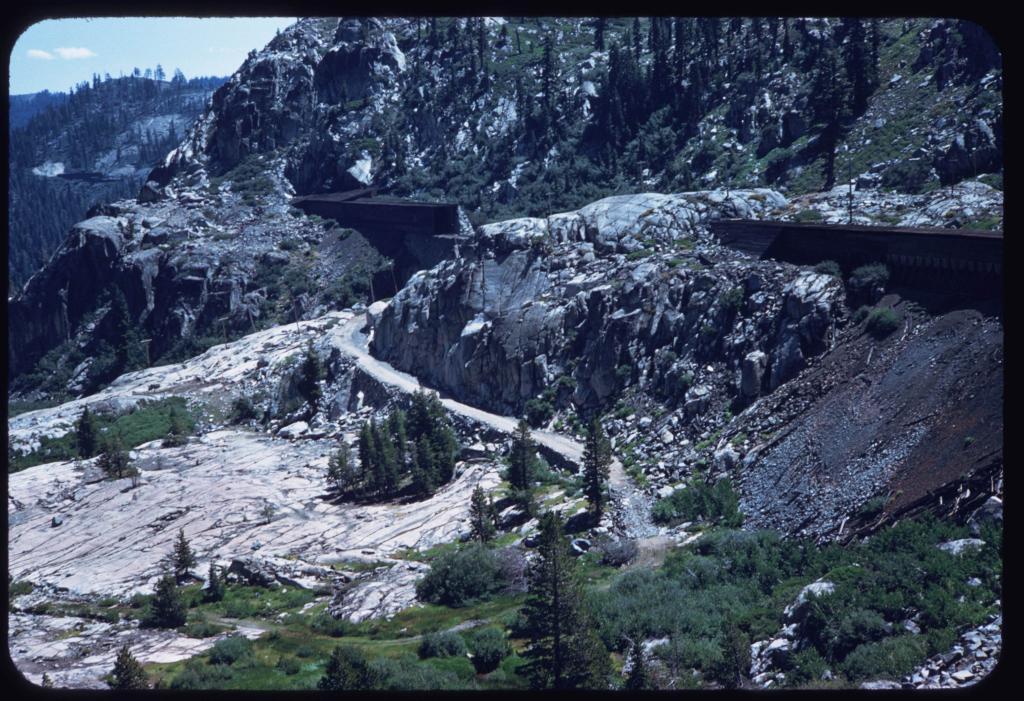 Another view of the new alignment. The old road was off to the right and off the bottom of the picture. The underpass is hidden behind the granite hill in the center. The snowsheds can be seen in both of these photos.

Even the “new” road couldn’t last forever. By the 1920s traffic was only getting heavier, but road construction technology was also getting better. So they decided to blaze an entirely new path through the mountains here. A new road was designed that didn’t follow the path of the old wagon road at all. It didn’t cross the railroad tracks either. In 1926 this new highway, known as Highway 40, opened just a bit north of this old road. The old road was abandoned, and the underpass closed to traffic. In the years since then nature has started to reclaim the old road, though it and the underpass still exist. Trains stopped taking this route in 1993, and the old railbed is now a hiking trail.

The underpass is still looking solid 100 years later, if a bit dingy. A truck passes through the underpass, with the wooden snowsheds still intact on top of it.

Another overview of the whole Donner Summit area, with the 1914 highway visible as a bright scar, the 1909 highway fading away on the right, and the snowsheds watching over both roads.

Come back for a closer look at the snowsheds themselves in Part 3!