F.W. Day Then and Now 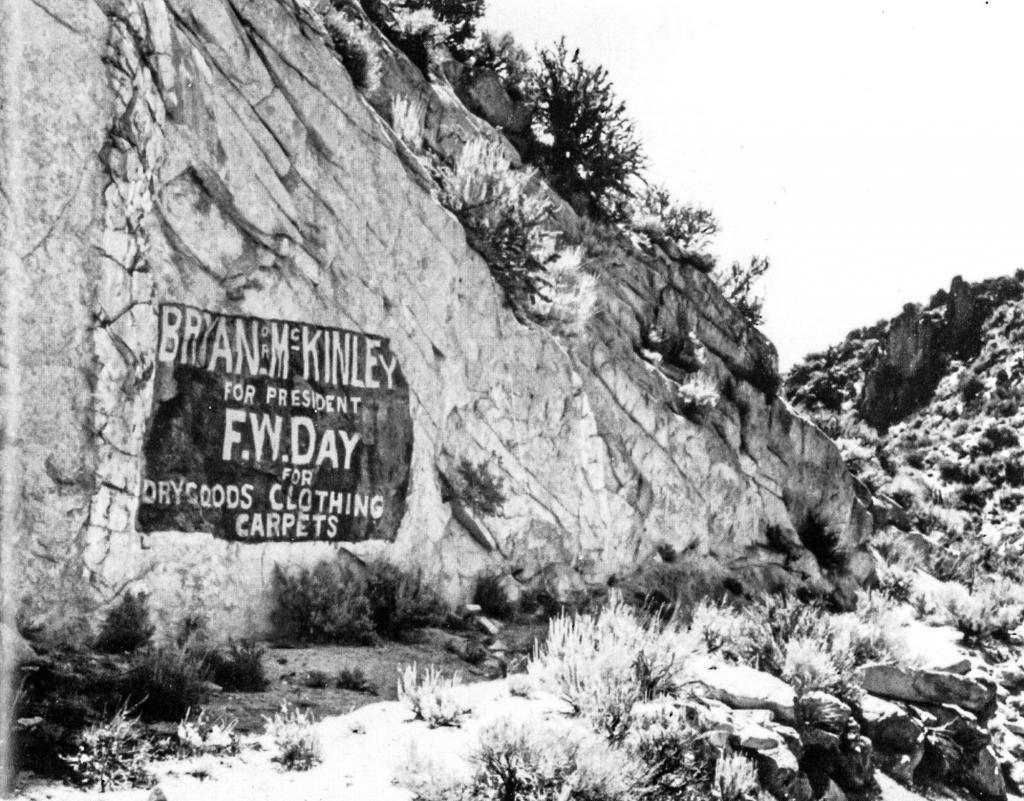 For the election of 1896, it was William McKinley versus William Jennings Bryan. Mostly forgotten now, it was a hot contest in its day, and the supporters of one side or another resorted to all kinds of advertising techniques to get the word out about their candidate.

Carson City shop owner Fred Willis Day didn’t want to alienate any of his clientele, though. In that day, businessmen had plenty of advertising techniques of their own to use, and rock ads were one popular one. Find a rock outcropping somewhere, preferably close to a well-traveled road, and paint an advertisement for your business on it. No wood or nails required. So when F.W. Day set out to make a sign, he found this rock outcropping in Clear Creek Canyon, along one of the popular wagon roads between Carson City and Lake Tahoe. it was a great spot because it was right at a bend in the road, so every traveler that passed by couldn’t help but see it.

But what to put on his sign? With election fever in full swing, he decided to tap into that with a political-themed ad. “Bryan or McKinley for President,” he said. “F.W. Day for Drygoods, Clothing, Carpets.” It don’t matter to me who you vote for, he was telling people, as long as you come into my shop. It’s hard to tell how successful he was. There’s not much mention of F.W. Day in Carson City history, just one in a long line of forgotten shops downtown. Bryan lost the election, but presumably Day won a few extra customers at his dry goods shop. 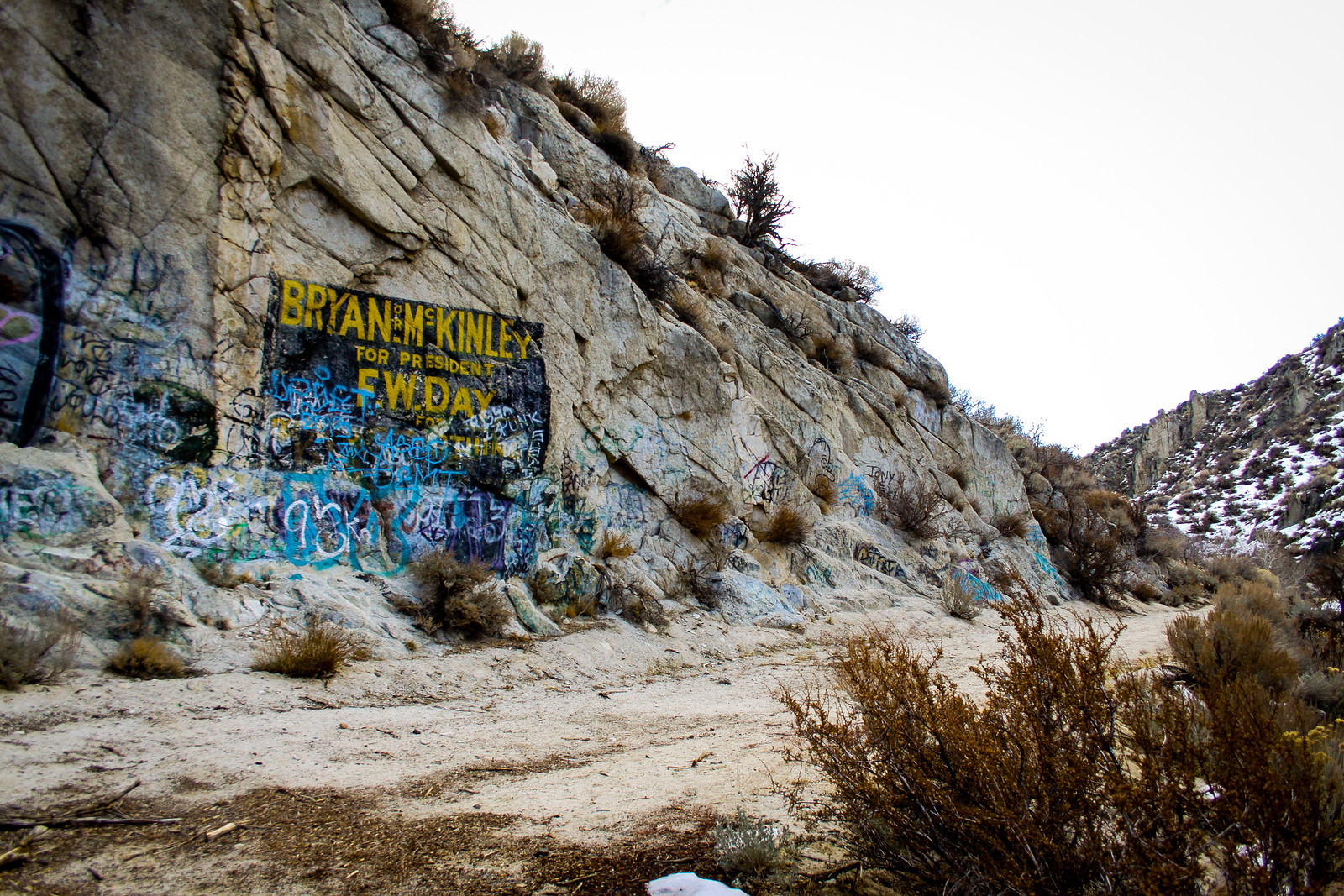 A forgotten sign for a forgotten shop, it wouldn’t be a very remarkable story if that’s all there was to it. But here’s the shocking twist to the story. F.W. Day’s rock ad in Clear Creek Canyon still survives to this day, 117 years after the election of 1896. It’s hard to tell why. Presumably the ad’s effectiveness waned after the election was over. So the logical thing would have been for Day to go out and paint over it with a more timely reference. Or, if he neglected the sign, for someone else to come along and put up their own sign on this prime piece of real estate. If you’re going to put up a rock ad in Clear Creek Canyon, this really is an ideal spot. But, unaccountably, Day’s sign, with its reference to Bryan and McKinley, is still there.

Also unclear is the date of the historic photo of the sign. The road in front of it is strewn with weeds and rock, and doesn’t look like it has been traveled in a long time. It doesn’t exactly look like one of the main roads to Tahoe. However, when Clear Creek Highway was improved and paved in 1927, they straightened out a few of the more hair-raising turns. The new alignment of the road passed a hundred feet south of here, hugging the other side of the canyon. That left this bend in the road abandoned and forgotten. It seems that the picture was taken sometime after then, at which point the sign would have already been 30 years old.

Once the road was abandoned, there was no reason for the sign to be repainted. Over time it was forgotten, tucked away where it was difficult to see. It made it through the decades and into the present day, although not without feeling the touch of idle vandals and their spray paint. The bottom of the sign is completely obliterated, but the top half, which is hard to reach without a step stool, still remains. And for being over a century old, it still remains very vibrant. Most fading ghost signs like that are worn and hard to read. This looks as crisp as the day it was painted. It makes me wonder if it was touched up and restored at some point. If it was, that brings up a whole host of new questions. When? Why? By whom?

Whatever the reason, though, F.W. Day’s sign remains as a reminder of a bygone type of advertising. And it makes for a nice little treasure hunt. Even though I knew the sign was somewhere in Clear Creek Canyon, it still took me a couple of passes up and down the road before I saw it, tucked away to the side. Clear Creek Canyon itself is mostly forgotten, too. In the 1950s a modern superhighway was built upslope from here, bypassing the old road altogether. Cars now travel Hwy 50 at freeway speeds far above this rock wall. Old Clear Creek Road is a crumbling piece of pavement that serves the residents who live further up the canyon, and in fact near the sign there is a painted warning on the street that says “Private Road.” Not many people come by to disturb F.W. Day’s sign, so there’s a chance that it might survive another 100 years (or 25 presidential elections). 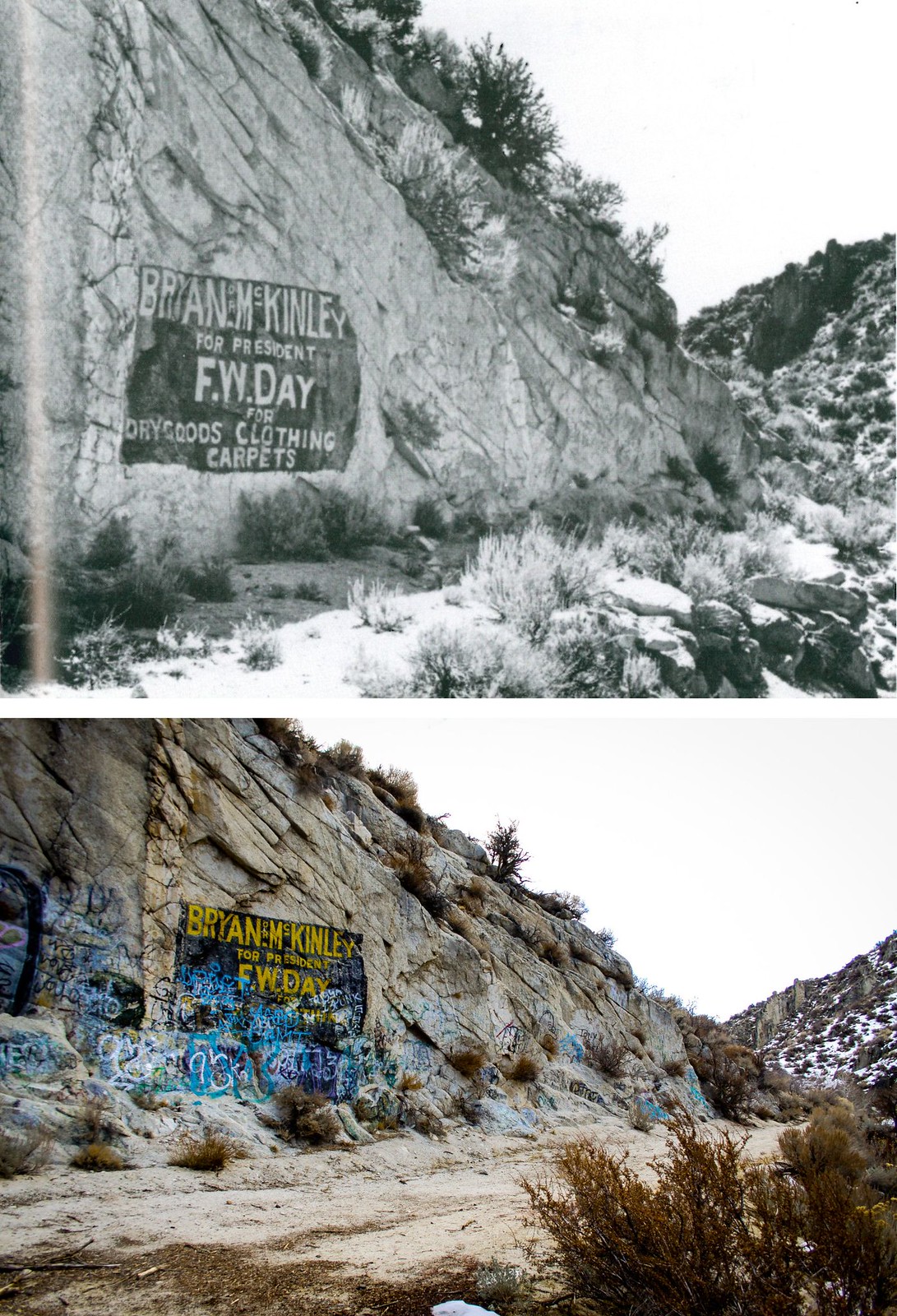