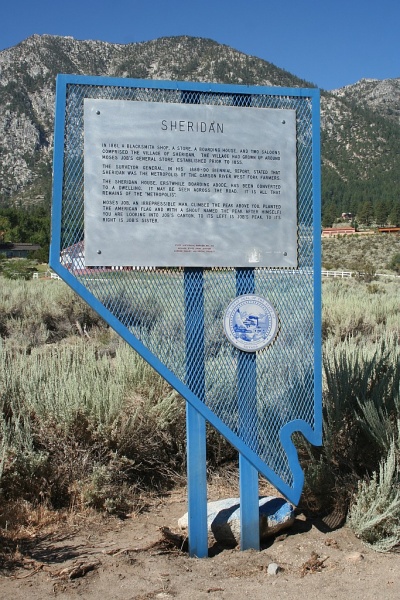 The Nevada Appeal has a profile today of Paul Sebesta, who runs www.nevada-landmarks.com. He has traveled over the entire state, hunting down the Nevada State Historical Markers that dot the landscape. There are 267 markers in the state of Nevada (though technically one is across the California border), and he has personally either visited each one, or gone through the trouble of confirming that it is missing. He has been part of the search for the missing markers in Carson City, the ones that showed up in an NDoT yard last month, and I’ve also chatted with him a bit as I was building my own list of markers.

It’s a good article, and it gives a good insight to the historical marker system, which most people just take for granted and drive by every day. The markers are weatherized and built to withstand years of abusive Nevada summers and winters, but still lots of mishaps can happen to them. They can be shot at, covered in graffiti, or otherwise vandalized. They can be taken out by car accidents, like I think happened south of Gardnerville a few years ago. Or, the biggest problem of all, they can be removed because of construction and then “lost” in the system, being tossed in a yard somewhere and forgotten about. That’s what happened to the three that were just found in Carson City. It’s the state’s job to build and take care of these markers, and with all the budget troubles we’ve been having lately the markers just aren’t a high priority. But you can see some work still being done in the system. Just last summer I noticed that marker #243, which celebrates the Corbett-Fitzsimmons Fight, reappeared after being gone for a couple of years. It was located in front of the Carson City Sheriff’s Office, and when the office was rebuilt they took it away for safekeeping. When it didn’t reappear after construction was finished, Paul thought that it was gone for good and had been lost in system like the others. But then last summer they put it back, looking all shiny and new. There are still plenty missing, though, like #123, which is right near my house and disappeared some time in the last year or two.

So pay attention to these markers as you drive around, and check out www.nevada-landmarks.com to get more of the story behind them.

Children's Museum Up For "Save A Landmark"