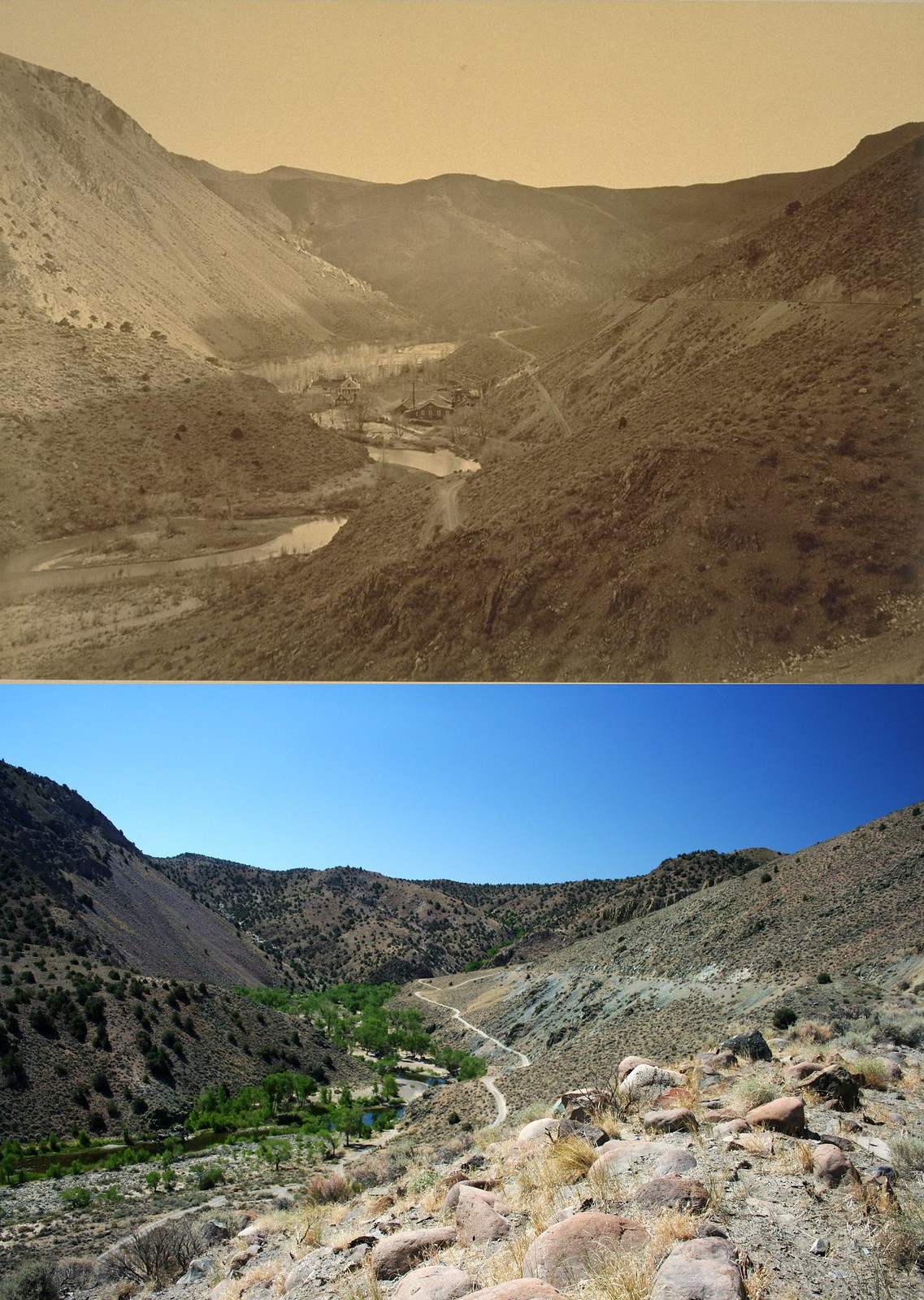 When photographer Carleton E. Watkins visited Virginia City and the Comstock in the fall of 1876, he had no idea he was viewing the area at its absolute peak. More gold and silver were being pulled out of the ground than had ever been before, and though no one knew it, than ever would be again.

Watkins’ interests in Nevada also were purely monetary. One of the preeminent landscape photographers of the late 1800s, Watkins traveled around the West visiting all the places the people of San Francisco and Los Angeles probably never would get to. Much of his work was done in Yosemite, which back then required several days worth of hard travel to visit. So Watkins made the trip for them, hauling his huge store of photographic equipment, and brought back pictures that he would sell to the curious citizens who would probably never set foot outside the city. Photographs back then were rare objects, and they sold well, but not well enough to keep up with Watkins’ spending. In the 1870s he was deep in debt, and had to sell all of his negatives to escape from bankruptcy.

After this setback he had to start over from scratch, and since he was now essentially competing against himself and all the pictures he had taken that were already out there, he decided to start his “New Series”. One of his first expeditions after relaunching his business was to travel to Lake Tahoe, Virginia City, and the Comstock, fabulous places that had been capturing the public’s imagination for several years. Word of the endless riches held in the Comstock had spread all over the West, and even back East, but few photographs of the place were circulating around. So Watkins saw an opportunity to boost his New Series with a truly unique group of images, and he set off for Nevada.

This photo is from that trip. On his way up to Virginia City, Watkins spent a lot of time in the Carson River Canyon, where the raw ore from the Comstock was milled into pure gold and silver. He photographed most of the mills in the canyon, sometimes climbing hundreds of feet up steep rock walls until he found the perfect vantage point to best show off the mills and their natural surroundings. But for some of the pictures he found the best view came from the railroad tracks. This photo was taken from the Virginia and Truckee grade, and shows the Santiago Mill perched on the water’s edge far below. The mills had to be located on the river, because before electricity the motion of the water was all they had to power the large stamps that crushed the ore. Several large buildings are evident at the mill site, including what looks like a house for the mill superintendent. To the far right you can see the scar of the V&T Railroad grade cutting through the hillside, and below is a wagon road. I think you can even see the faint line of an ore slide heading from the railroad tracks down to the mill, used for quickly dumping entire hoppers of raw ore and using gravity to get it down to the mill.

130 years later, the mills are gone and the river is quiet. The railroad has been gone 70 years, although an effort is underway to bring it back. And in fact it was the railroad that brought me to the river canyon this day. Ever since the rails had been pulled up, the old grade became a four-wheel-drive road, used by recreationalists wanting to access the canyon. But then the news came out that the railroad reconstruction project, which is going to return the tracks to the old railbed, was ready to start work in the canyon and would be closing the road to vehicle traffic permanently. So I knew this would be my last chance to drive into the canyon and see some of the vistas. So I drove part of the way in, until I felt I had gone far enough and was ready to turn back. I stopped in a little turnout, with a great view of the canyon, and pulled out a little stack of Watkins’ photographs to see if any of them lined up. Amazingly I found I was in almost the exact spot that Watkins had set up his tripod to take the picture of the Santiago Mill. So I snapped off a few shots, much easier with my digital SLR than with Watkins’ large format glass negatives.

Comparing the two views actually shows very few changes. The wooden mill of course is gone, and the trees on the river banks have been allowed to grow wild. But other than that, the canyon has remained the same. The scar of the railroad grade and the wagon road are still there, both used by off-road vehicles now. The water level in the river seems to be about the same, maybe a bit higher in Watkins’ time. But the level in the river fluctuates wildly throughout the year, just as it has done for thousands of years.

One day you’ll be able to ride the V&T Railroad through this canyon again, just as Watkins did, although I doubt they’ll stop to let you hop off and take a picture. The view, though, will be the same as what travelers saw 130 years ago.

Carson River Mills, Then and Now