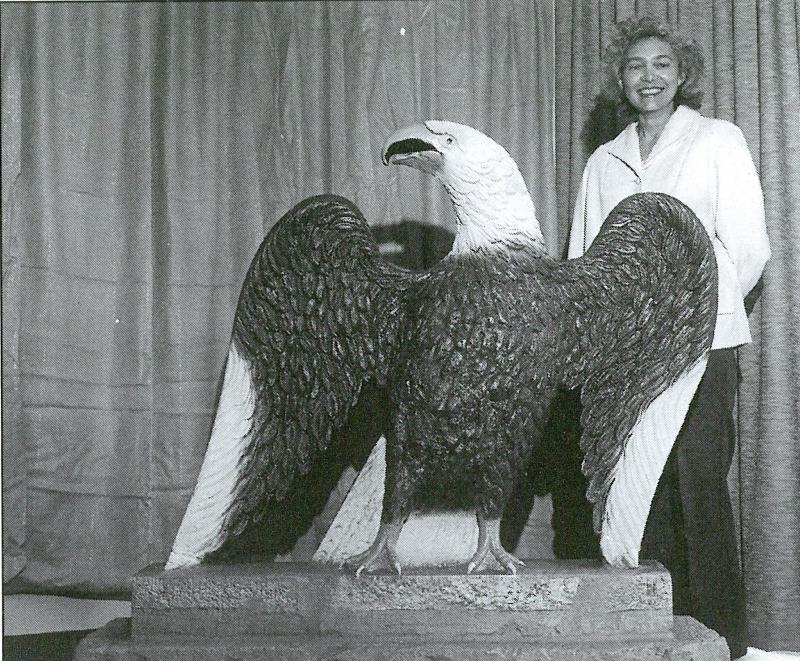 Fred Nietz has been on a treasure hunt lately. Fred is a principal of Arlington Group, an organization that is responsible for coordinating events in Carson City, including trying to spearhead activities to celebrate Carson City’s Sesquicentennial next year. Fred is also a sometime contributor to this site. The treasure in question is one of Carson City’s forgotten relics, the “sandstone” eagle of Abe Curry. It is pictured above, right after its restoration in the 1970s. Right before it disappeared from public view. Fred sent along some pictures and notes, and wanted me to share the story of the eagle with you.

Abraham Curry is widely recognized as the “father” of Carson City. Back in 1858 he and a couple of business partners bought a large portion of the Eagle Valley off of its current resident, a rancher and trading post operator named John B. Mankins. The guys then set about laying out a town and trying to convince migrating pioneers to stay and settle down here, instead of continuing on to California. Their efforts were largely successful; obviously, since Carson City is still here today.

Curry is the most well-known of the group, the one most often credited with sticking with the job of building a town from nothing in the middle of the desert. He also opened up the valley’s first vacation resort, at a hot springs a couple of miles out of town. He had a hotel built at the site, using sandstone taken from a nearby quarry, and named it the Warm Springs Hotel. The site is now home to the Nevada State Prison, but back then it was a getaway spot, a place for weary travelers to rest and also for the elite of the burgeoning town of Carson City to meet. Curry even rented out space in the hotel for the Territorial government to hold their legislative sessions.

One of the finishing touches Curry added to the hotel was the statue of an eagle. He mounted the eagle on the roof of the hotel over the entrance, to serve as welcome to anyone who came to visit. You can see it on its perch in the pictures below. In 1864 Curry sold his hotel to the Territorial government to be used as a prison. The eagle was part of the deal. It stayed on the property, survived a fire, and in 1898 was moved to a new perch atop the gates of the prison. Again, to serve as a welcome, this time to a more reluctant class of visitors.

In 1920, the Fraternal Order of Eagles, Carson City Aerie No. 1006, had renovated the Schulz Building in downtown Carson City to serve as their headquarters. This building was at the southeast corner of Carson and Robinson Streets, where the Carson Nugget’s huge neon sign resides today. The Eagles, wishing to connect with a brother in arms, as it were, procured the sandstone eagle from the prison and mounted it on top of their own building. From this place of prominence it was able to watch over all of downtown, and it was up here that it celebrated its 100th birthday.

In 1972 the Carson Nugget, then a small casino and coffee shop next door, had grand expansion plans that called for the demolition of the Schulz Building. The eagle once again was moved, this time to spare it from the wrecking ball, but this move wasn’t as kind to the sculpture. The eagle split into three pieces during the move, and was placed into a box awaiting restoration.

By 1975 the Eagles were settled into their new headquarters, at 1380 E Fifth St, where they still are today. The eagle was taken out of its box, patched up, and given a new coat of paint. It was then placed on display inside the headquarters building, where over the decades it was forgotten by everyone who was not a member of the Fraternal Order of Eagles. Fred Nietz, through his snooping around, was able to track down the eagle to its current home, and was granted access this week to visit it and take a couple of pictures. The eagle sits in a corner of the room, surrounded by a small shrine of Eagle memorabilia. And although it’s known as the “sandstone eagle”, and it’s referred to as being carved out of the same native sandstone as the Warm Springs Hotel, Fred has assured me that it was actually carved out of wood. The sculpture is now nearly 150 years old, just like Carson City itself, and it’s already been broken once. It probably couldn’t handle being exposed to the elements anymore, so it is kept inside here, safe from the weather. And here it will probably stay, unless Fred is able to use his influence to have it displayed in an area of more prominence. But it’s good just knowing it’s still around, knowing that it hasn’t been lost to time like so many other artifacts. There are many large monuments to Carson City’s history that we can visit, like the State Capitol and the U.S. Mint buildings, and now that this little eagle has been rediscovered it can join its larger brothers in our consciousness, serving as a link to our past even as Carson City grows beyond the wildest dreams of Abe Curry.