It’s been a long time since we heard a peep from Jethro, and I’d been wondering what he’s been up to. That’s Max Baer Jr, the actor who played Jethro Bodine on the Beverly Hillbillies. For 20 years now he’s been trying to build a Beverly Hillbillies casino somewhere in Northern Nevada. First he tried Lake Tahoe, but found out the zoning laws up there pretty much don’t allow you to build anything. Then he tried Park Lane Mall in Reno, but that deal fell apart for reasons that nobody wants to admit. Then he bought the old Wal*Mart building in Carson City, but that plan got derailed when JC Penney and the owners of the Southgate shopping mall flat out told him that he was not allowed to build a casino on the property. Several years and several court battles later, the old Wal*Mart still sits empty.

So, what should Jethro do next? Move to Douglas County of course! His latest plan is to build his fabled Beverly Hillbillies Mansion and Casino along Hwy 395 just on the other side of the Douglas County border, on the empty land right across the highway from Best Buy. A shopping center has long been in the works for that corner anyway, so Jethro’s in negotiations to get his casino built kind of adjoining the center, away from the highway and down the hill a bit. He’s also talking about building a convention center right next door, which is something that the Carson/Eagle Valleys are very much lacking. 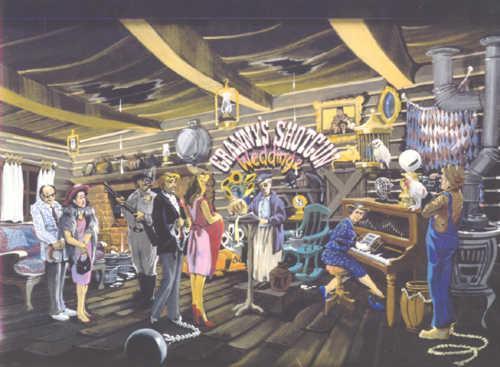 The whole article this time around is pretty much positive about the project. There have been a lot of voices in the past saying the Beverly Hillbillies theme was too tacky for the area, what with its flaming oil derrick, shotgun wedding chapel, and redneck limousine. But this time there’s none of that, just talk about how it would be an economic boom, bringing people to the area that might not otherwise come. Even in the Nevada Appeal’s comment section, which is usually full of cynicism and bile, the only negative comments are directed towards Carson City for letting Jethro get away and losing more tax dollars. There’s nobody bashing the concept itself anymore, so that either means we’re growing more mature as a people, or we don’t think there’s a shot in hell he’s actually ever going to build it, so there’s no use debating the details. Your call.

The landscape has changed in South Carson over the last few years since Jethro announced his project. Back in 2003 the Casino Fandango was a piddly little place, taking up a couple thousand square feet in the corner of an empty warehouse. But now the Fandango fills that warehouse, is planning on expanding it, and has also built or started building a three-story garage, a movie theater, and a hotel. All the things that Jethro wanted to build right across the street. So moving to North Douglas County, which is pretty devoid of gaming, is probably a smarter move to get away from the stiff competitive juggernaut of the Fandango. Although the new site is really only a mile or two down the road, and it’s practically on top of the new casino that’s being built at the corner of Clear Creek and 395. Which, coincidentally enough, is going to be called Bodine’s. How confusing do you think that will be to out-of-towners, to have “Jethro’s” and “Bodine’s” right across the street from each other?

And you’ll notice I’ve been avoiding revealing what my own opinions are on the casino. That’s because I’m a flip-flopper when it comes to Jethro. I used to think it was a little too Las Vegas for the area. My exact words were “We have a distinct lack of laughingstocks here in the capital city, and we rather like it that way. Jethro’s casino, if it really gets built, is just going to make us the punchline of a lot of jokes.” But at the same time, look at the amount of people, and the amount of money, going into Las Vegas every day. There’s something to be said about populism, and if the people want a Beverly Hillbillies casino, then dammit we better give it to them.

I guess the question is: is that what people really want?

More news as it comes in.