Jack’s Bar says it has been “A Saloon Since 1859.” That’s a lie. It’s not surprising that this building would lie to you, since on the opposite corner it says “Always Open,” and that is clearly not the case. In fact, Jack’s Bar hasn’t been open for more than 10 years. What started as a vacation for the owner has become over a decade of neglect, decay, and structural problems that cement its status as one of the most entrenched ghosts of Carson City. Yet still there is a mystique to this stone building at the corner of Fifth and Carson, something that calls to us as we drive by it. 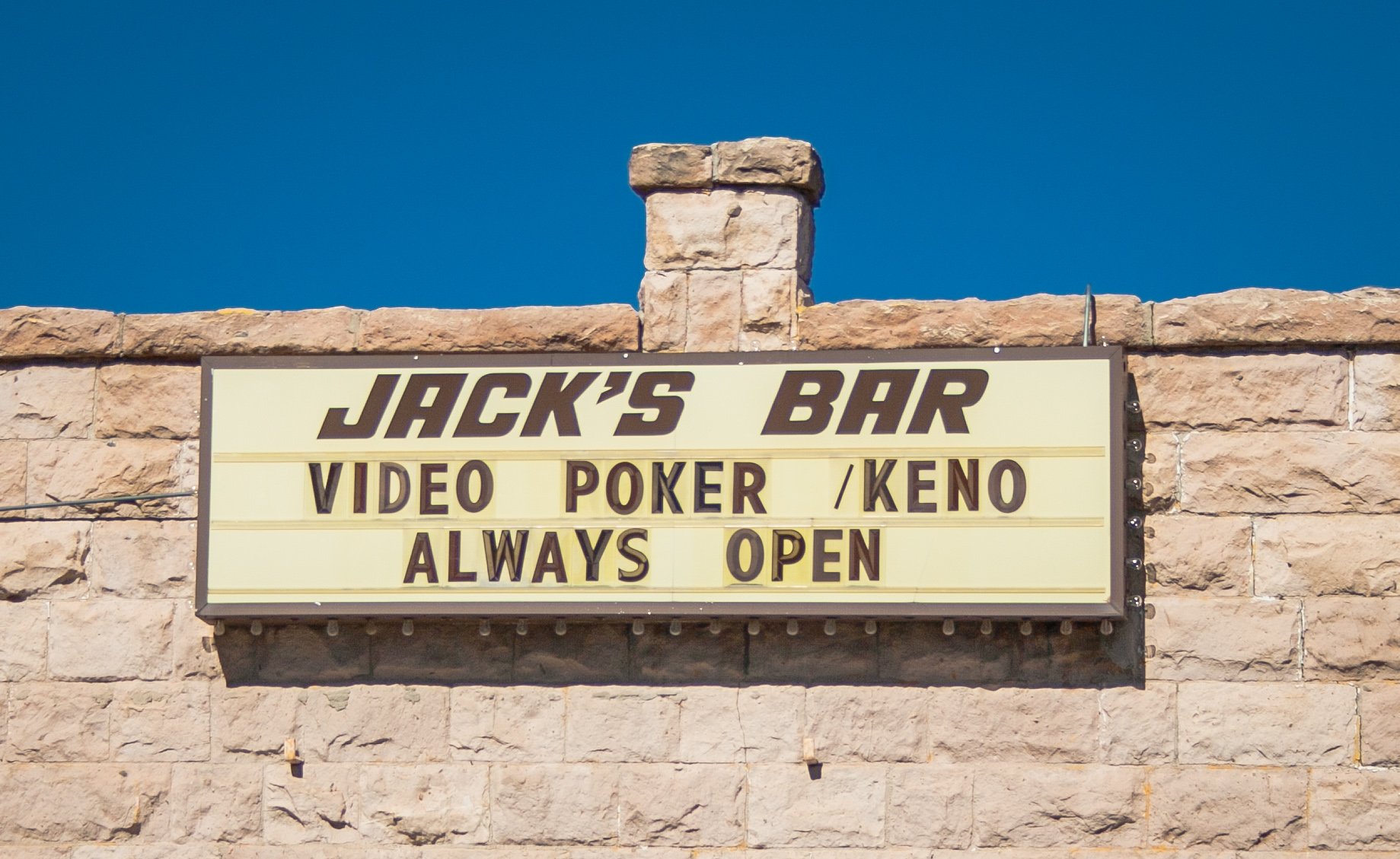 Jack’s Bar doesn’t date all the way back to 1859, but it does go back before the memory of any living Carsonite. Guy Rocha has traced the history of the building back to 1899. It first opened onÂ August 19, 1899, as the Bank Saloon. It was created out of sandstone from the State Prison, the same sandstone quarry that Abe Curry used to build the U.S. Mint, the State Capitol, and the V&T Roundhouse. Before the Bank Saloon this corner held a wooden frame building that did indeed date back to 1859. That structure was built as a dance hall, then was turned into the Frisbie Hotel. It lasted over 30 years, until it was demolished in 1892. The lot sat empty until 1898, when Johnny Meyer, who was running the Sacramento Saloon on the other side of Fifth Street, decided to build his own place. Then the Bank Saloon was born. Throughout the 20th century it saw a host of other names, includingÂ Â the Bank Resort, Hernando’s Hideaway, the Y-NOT Bar, and Angelo’s. Finally in 1966 it was renamed Jack’s Bar, and that’s what it’s been called ever since. The recent history of Jack’s Bar is a little more clear.Â Doug Addison bought the business in 1977, as part of his “first retirement.” He held onto it until 2002 when he finally closed it so he could go into a “second retirement” in Virginia City. He died just two years ago; you can find his obituary at Virginia City News. During the time Doug owned it it was a popular hangout in downtown Carson, with its neon lights always beckoning on a dark night. Its location across the street from the Legislature made it especially popular among legislators and lobbyists. Many a deal was presumably made in the dark corners of Jack’s Bar.

After Doug closed the bar, he sold it to Don Lehr and Al Fiegehen. If you’ve been paying attention, you’ll recognize those names as theÂ principalsÂ of Cubix Corporation, and more popularly as the folks who bought the Ormsby House in 1999. The bar had been overshadowed by the monolith across the street for 30 years, so it made a kind of poetic sense that they would fall under the same umbrella of ownership eventually. From Don and Al’s point of view, it made sense because they had already taken stewardship of one Carson City landmark, so why not take in another one too?

Early on, though, they ran into problems. As they started to poke around the structure they uncovered one problem after another. The whole building was leaning a little bit to the left. You can see it in the picture above; the south wall is tilted, and it’s pulling the east wall over with it. The north wall is separating from the building next door, and debris is falling into the cracks. Basically, it’s an old building, and like many old buildings it’s starting to fall apart.Â This document from 2003 reports the minutes from a meeting of theÂ Carson City Historic Resources Commission where Don Lehr tried to argue that case that Jack’s Bar was too far gone, and might not be worth the trouble to save. It’s not noted in these minutes, but Don and Al wanted to give up on the building as a loss and wanted to have it demolished. They did take out the Capitol Motel just behind it; that was less of a landmark and more of a heath hazard, so it was easy. The commission was able to talk them out of demolishing Jack’s Bar, but they said that with the Ormsby House taking up so much of their time and attention, they wouldn’t be able to do anything with the bar until the hotel across the street was finished. 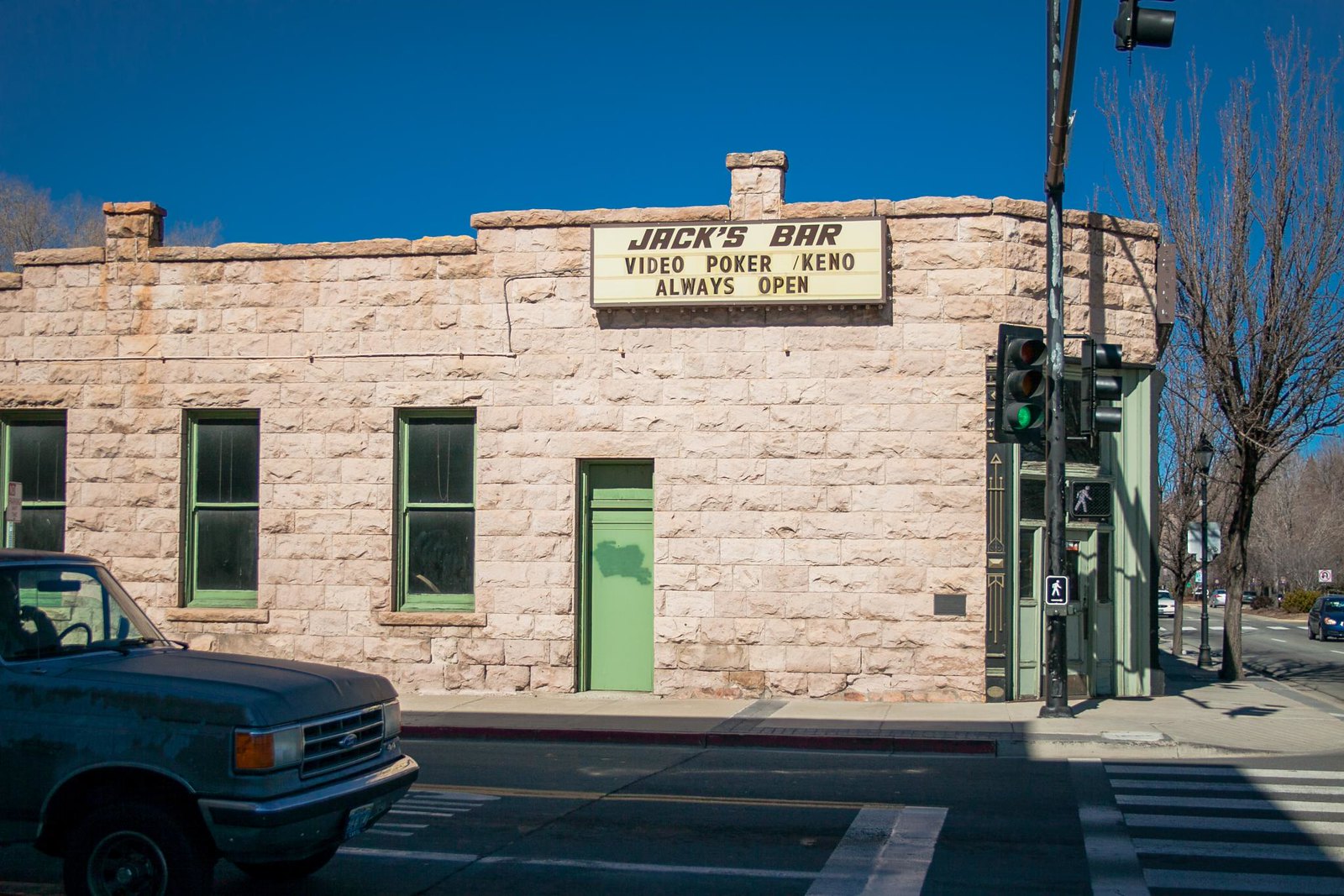 So that’s pretty much where we stand now. Several experts testified that the bar could be rehabilitated and brought back to structural soundness, and the owners have responded with a half-hearted “Okay. Someday.” They put a few measures in place, like bracing cables to reduce the likelihood that the south wall will collapse on itself, and boarded up the building. They’ve done nothing since then. More or less, I don’t think anything at all has happened with the building since 2003. It just sits in limbo, abandoned and as forgotten as a building on the main street can be. The memory of a time when Jack’s Bar was actually open is fading away, and with no end in sight for the Ormsby House, its future seems bleak. I imagine it will just keep sitting there until something either miraculous or catastrophic happens. Either someone else will swoop in and buy it to fix it up, or in 20 years the Ormsby House will actually open and then the owners will get to work on Jack’s Bar, or the bracing will give way and the south wall will collapse onto Fifth Street. Those are the only possible outcomes for the bar now, and honestly they all seem equally likely (although I’d still put the Ormsby House reopening at the bottom of the list). Until one of those three happens, Jack’s Bar will stand, Always Open, always watching over us as we drive by.

In 2003, after the bar switched hands and when the demolition talks were being tossed around, I cruised by Jack’s Bar and took a few pictures. These photos capture a time when the new owners will still figuring out what they wanted to do with the place, and were dealing with the mess left over by the previous owners when they left. 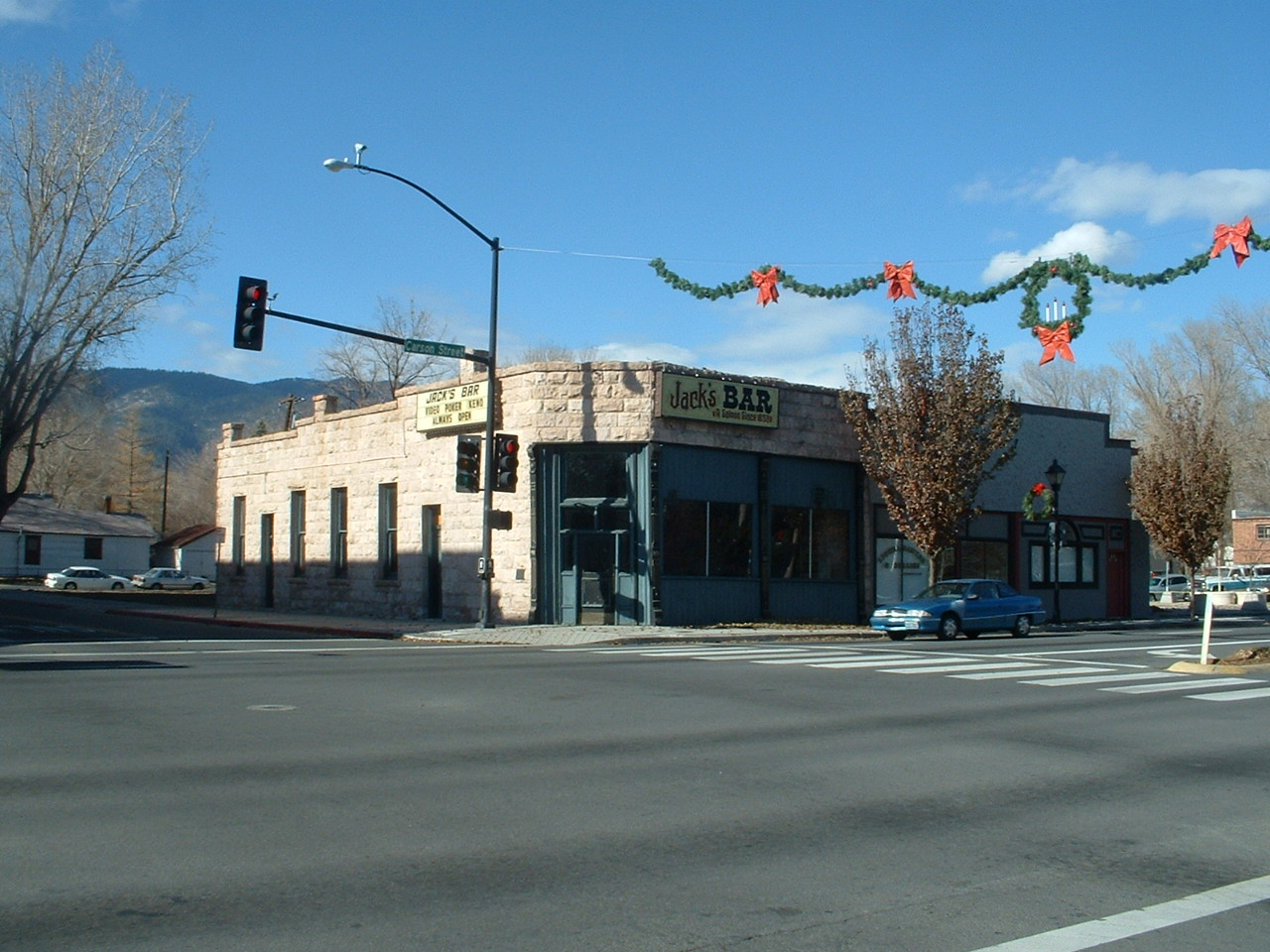 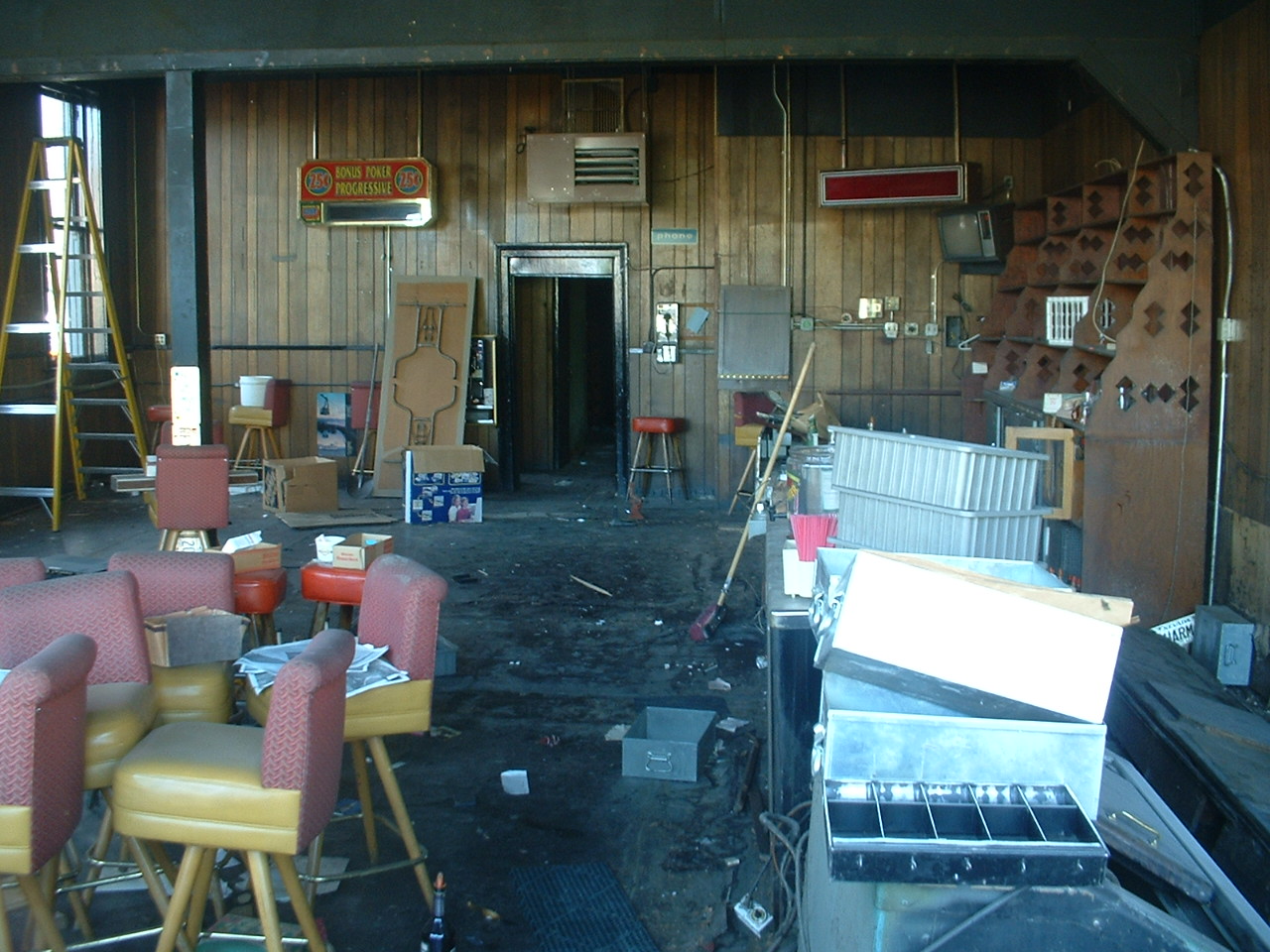 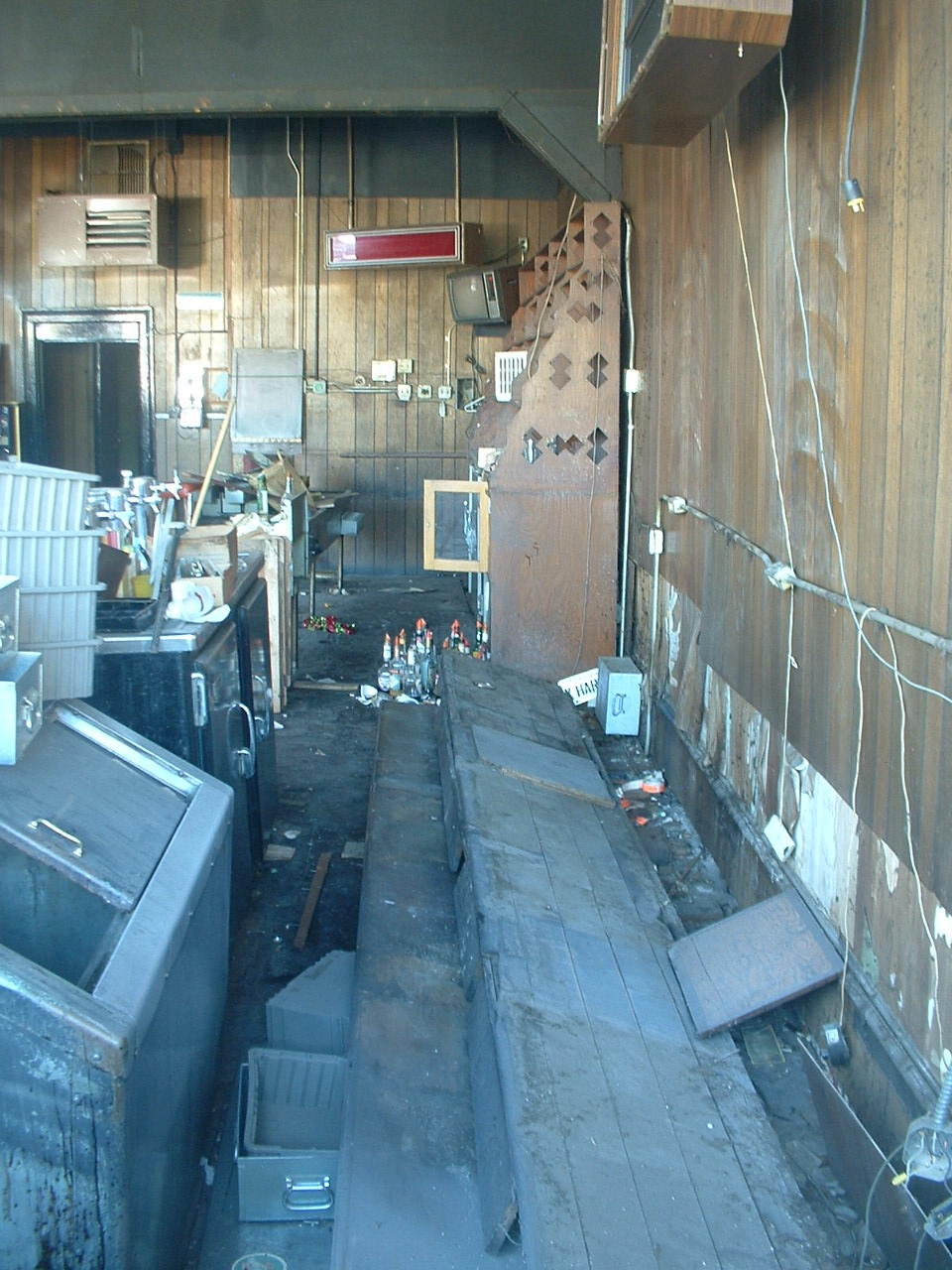 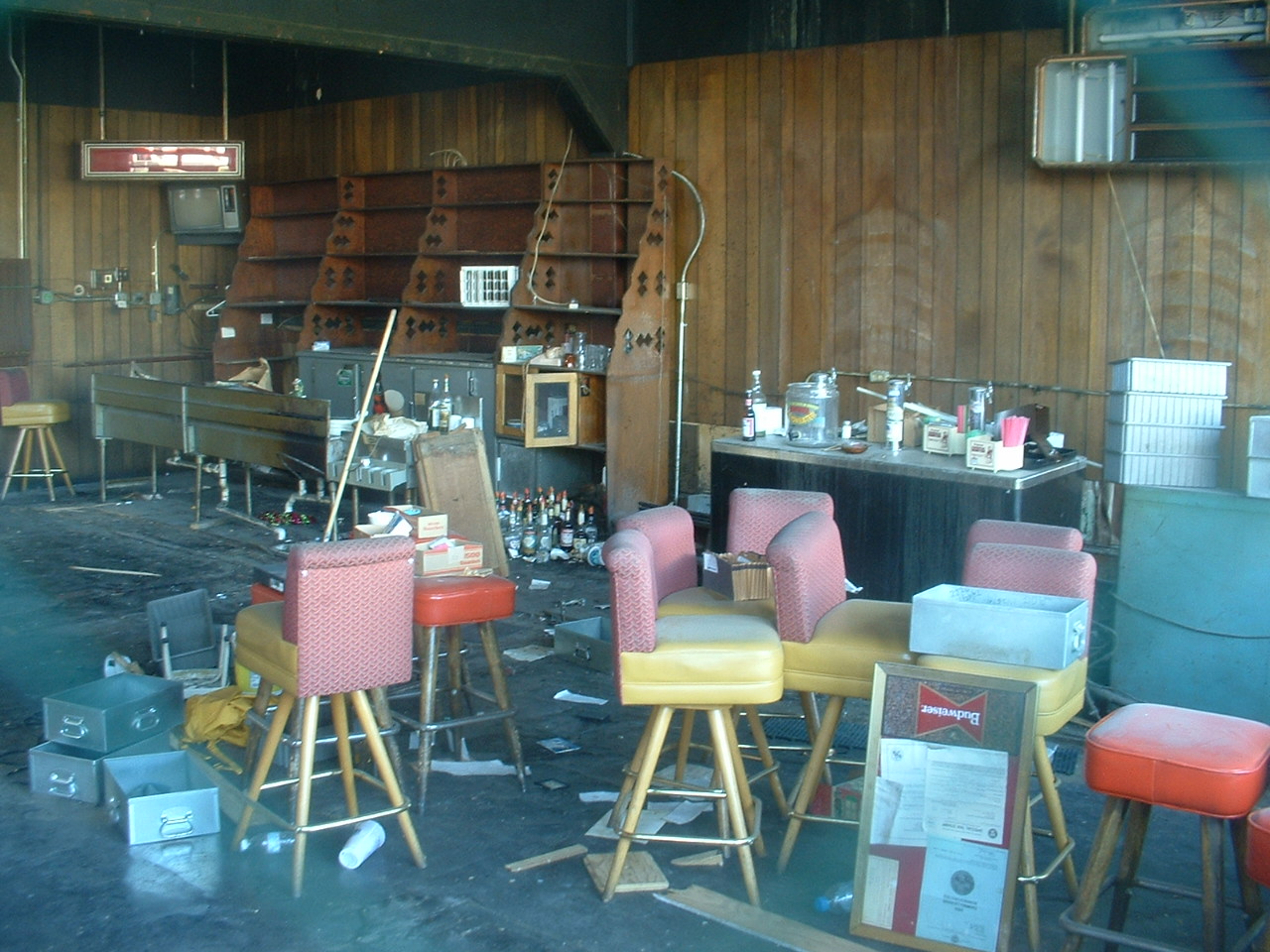 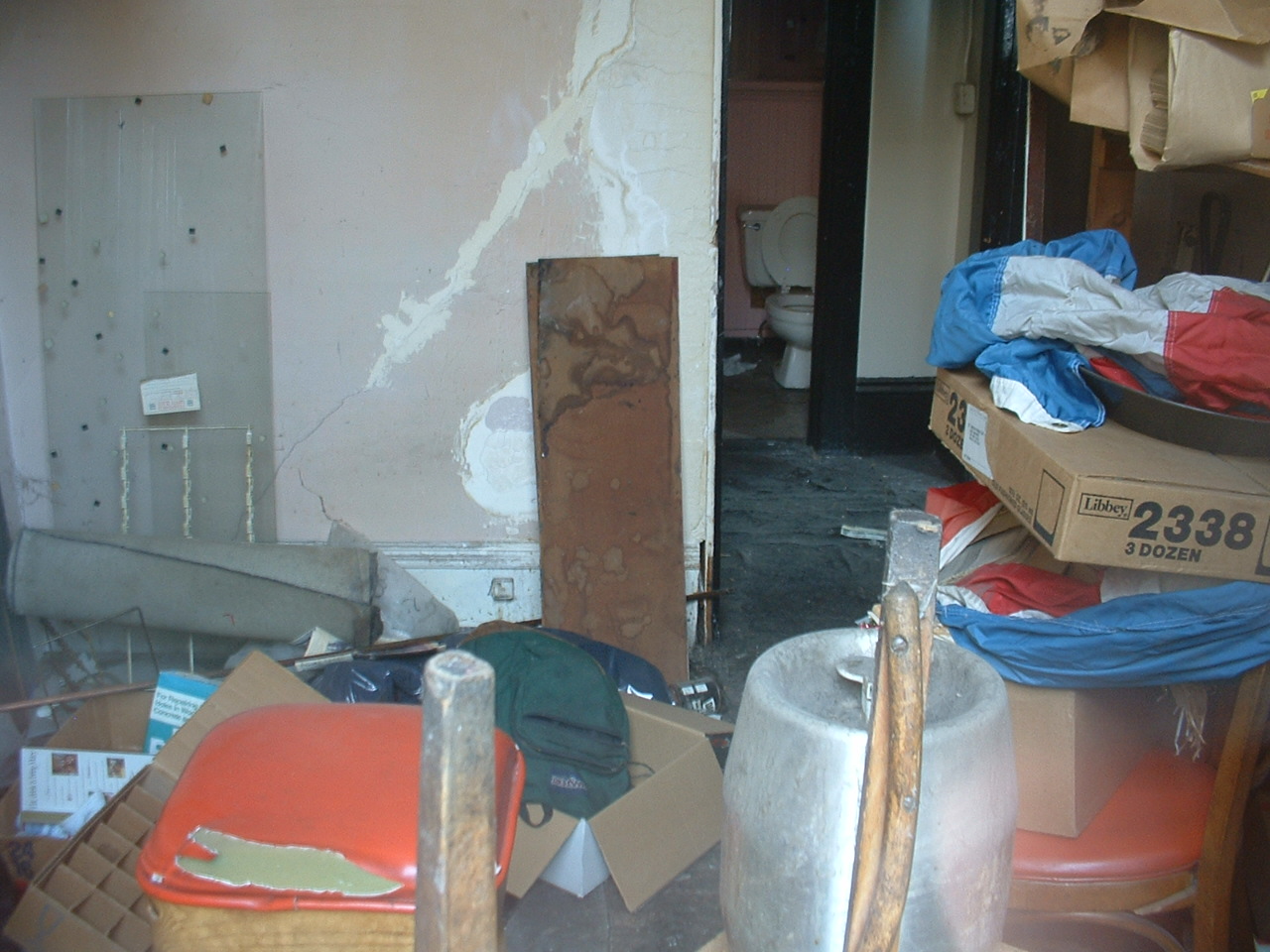 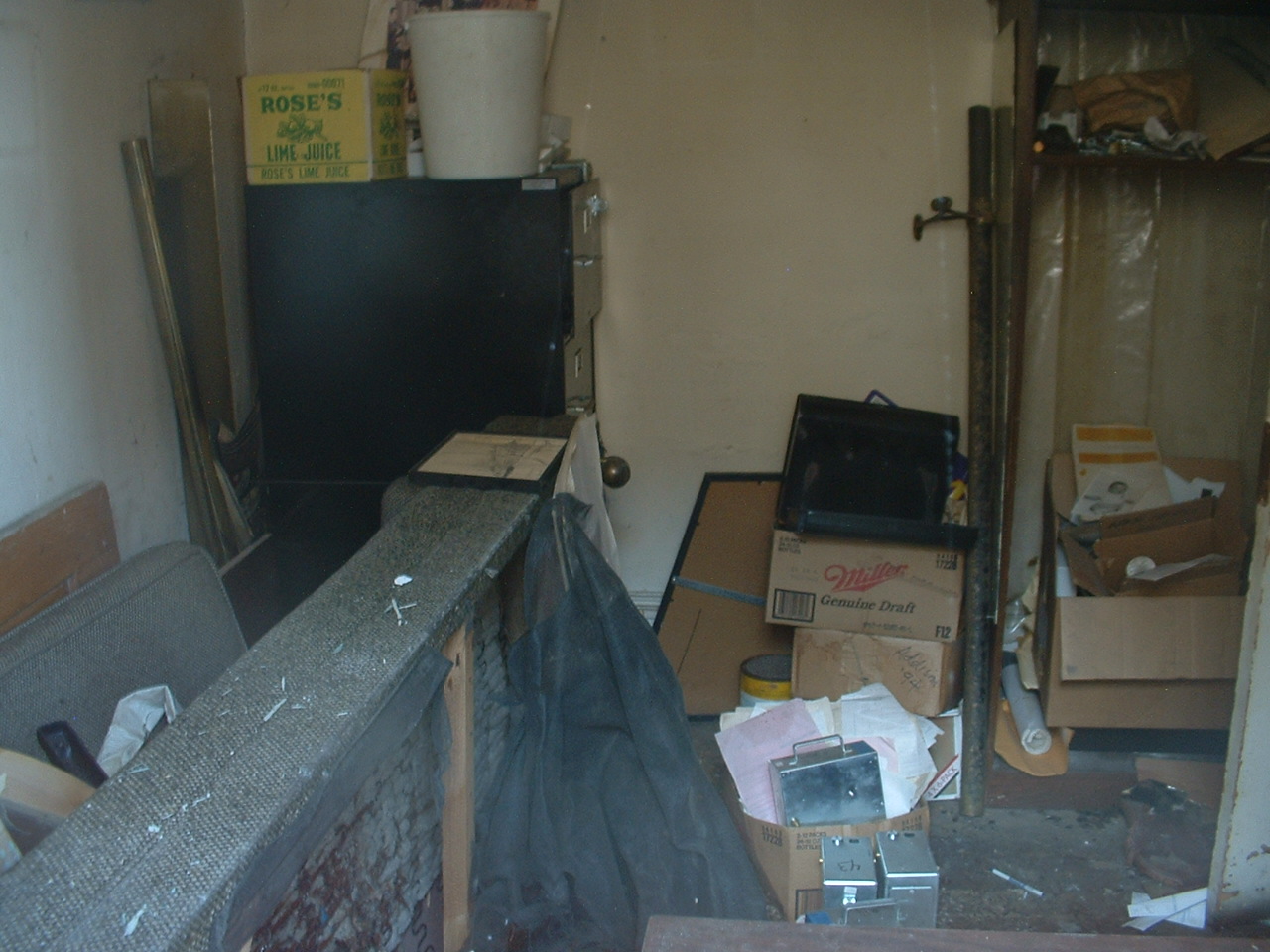 Later that same year I came back, and they had cleaned up all the junk. They even put some of the neon that they were stripping off the Ormsby House inside to keep it safe during the demolition across the street. 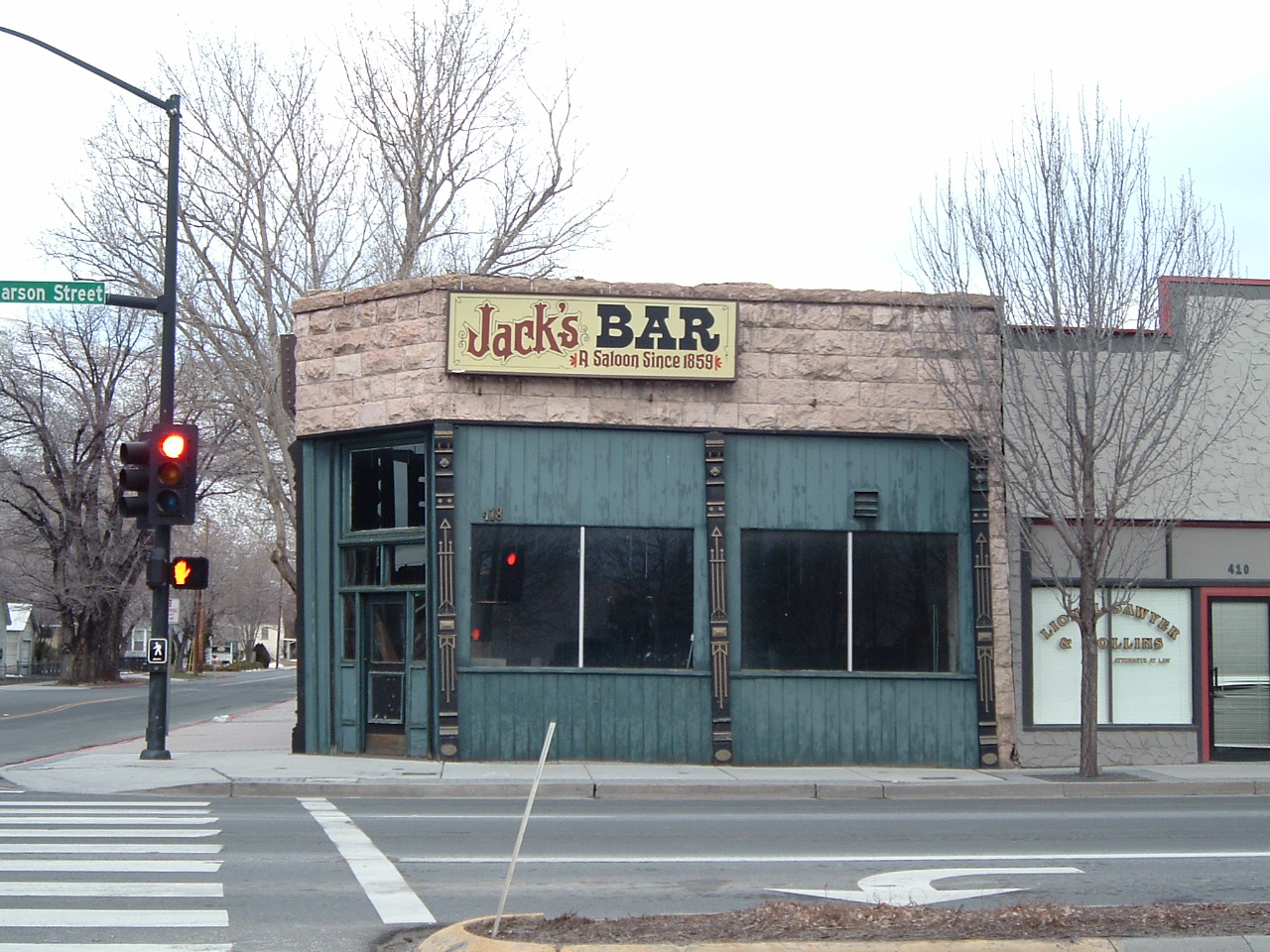 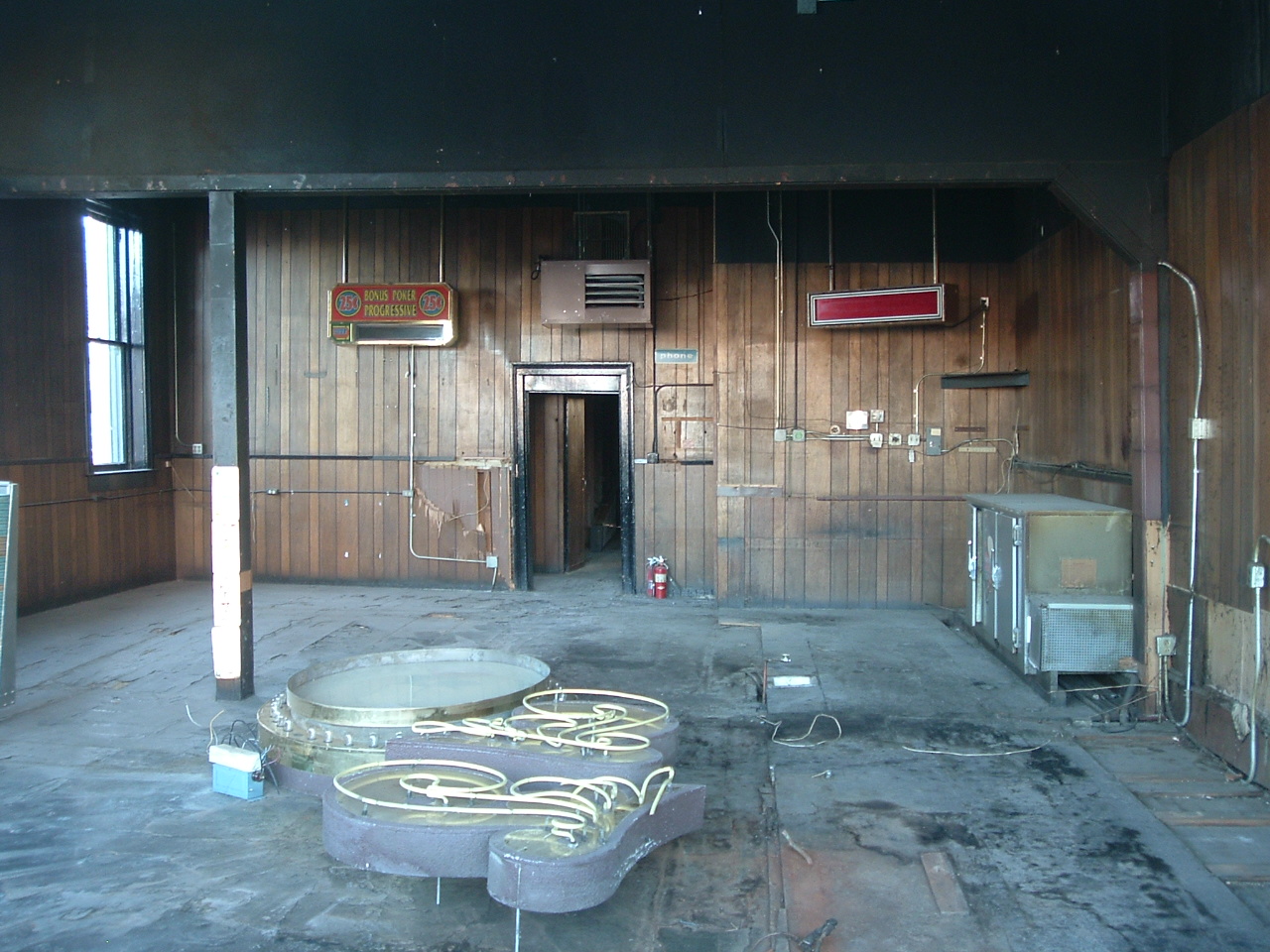 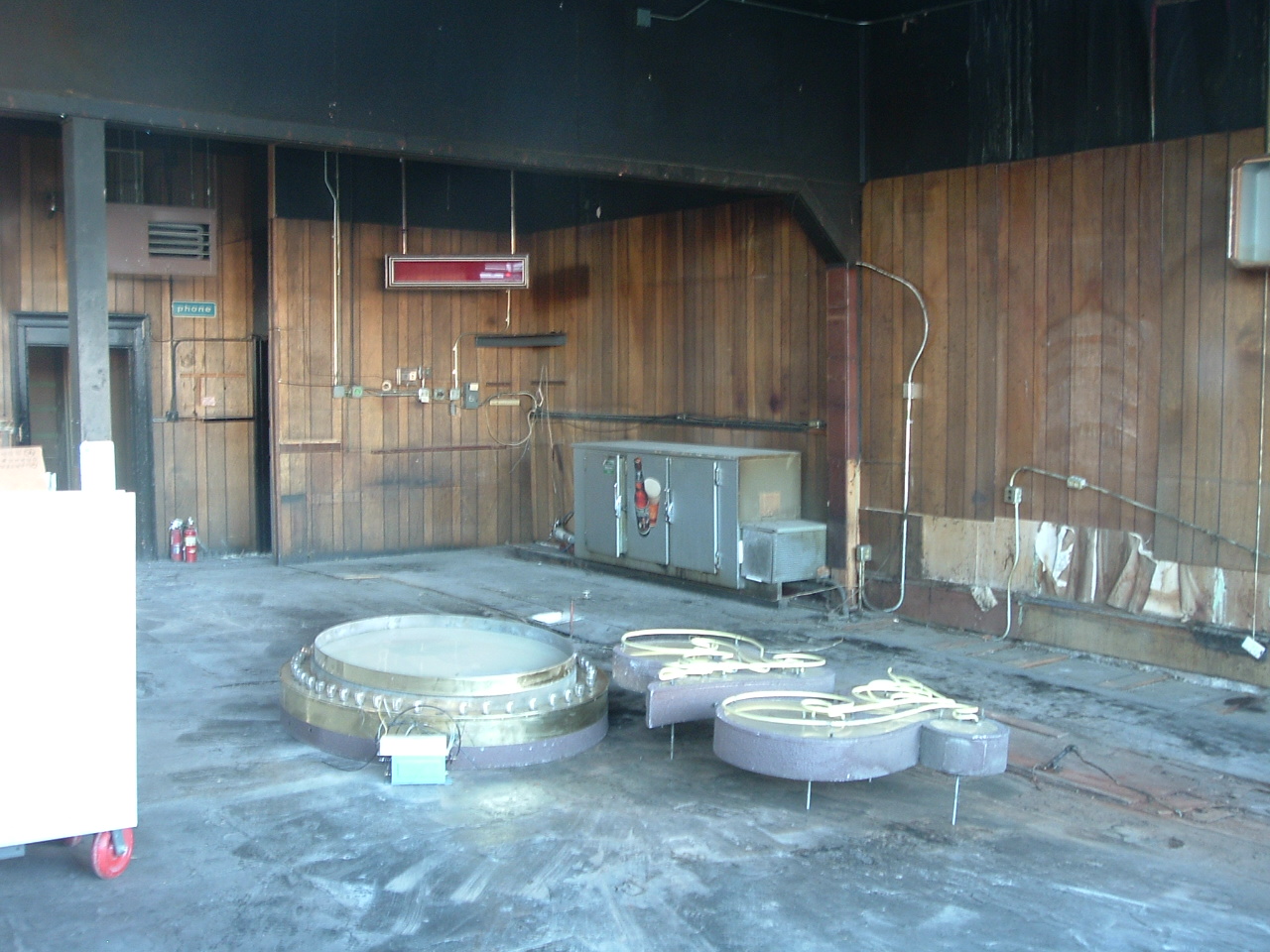 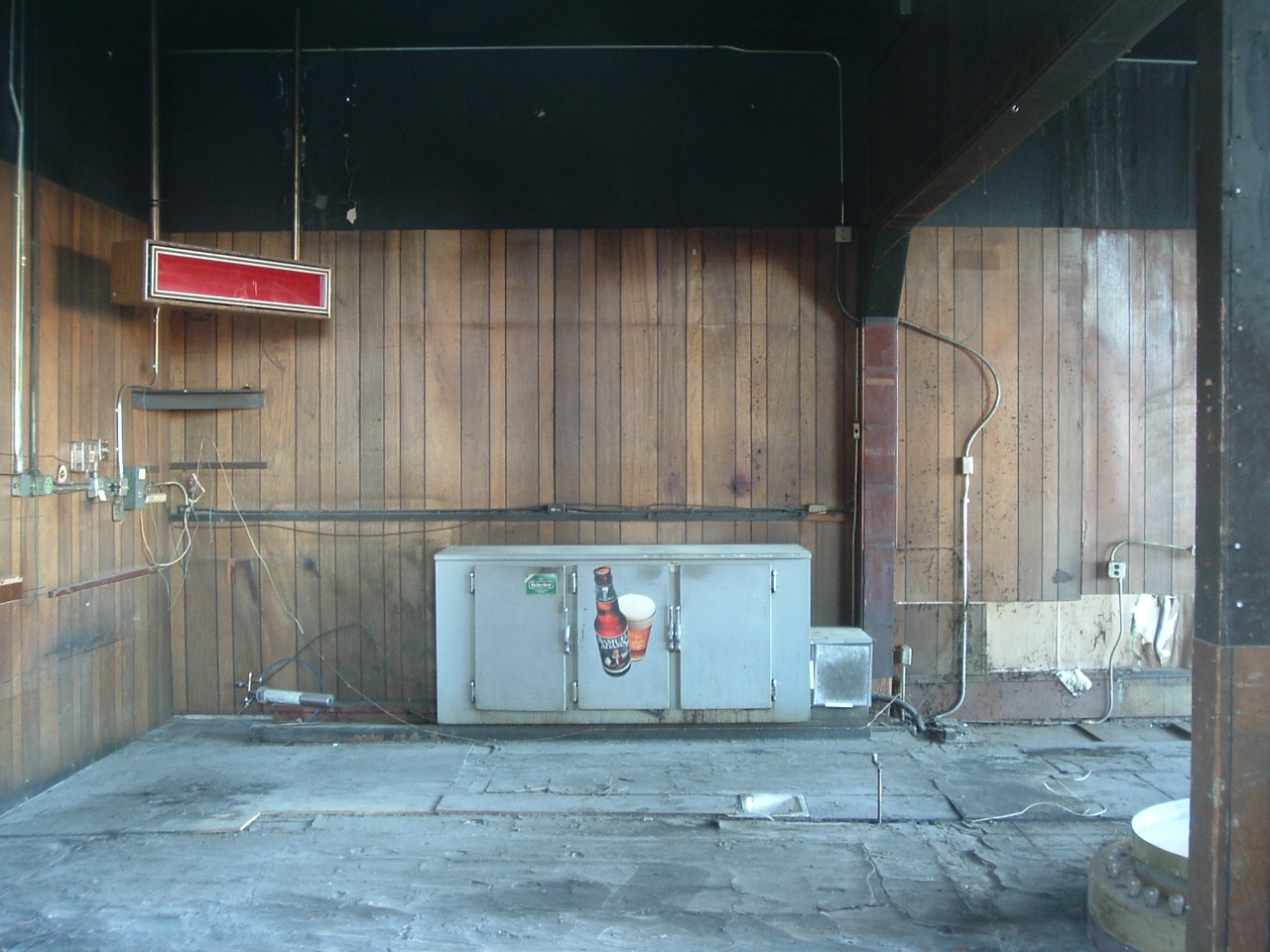 I revisited Jack’s Bar 8 years later, in preparation for this article. Things have gone pretty far downhill, especially in the interior. The wall is still leaning, but because of their braces I don’t think it’s leaning much more than it was before. The inside is in rough shape, though. The floor is decomposing, the ceiling looks like it’s going to cave in, and the birds have definitely made a home. Overall it just looks like the place is rotting from the inside out, and every year that goes by makes the job of renovation that much tougher. And notice that the neon, which was supposed to be in a “safe place”, has been left to rot with the rest of the structure. 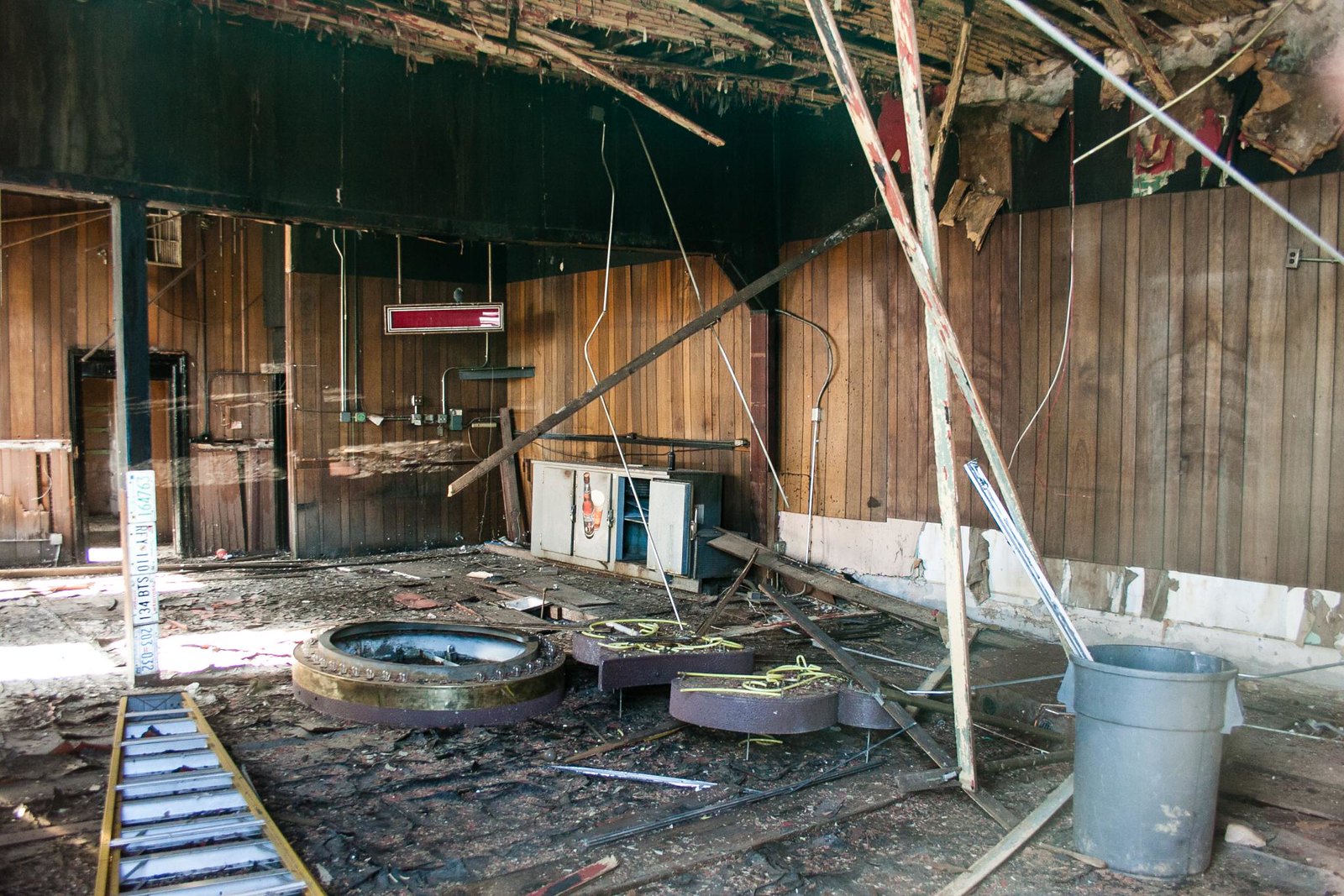 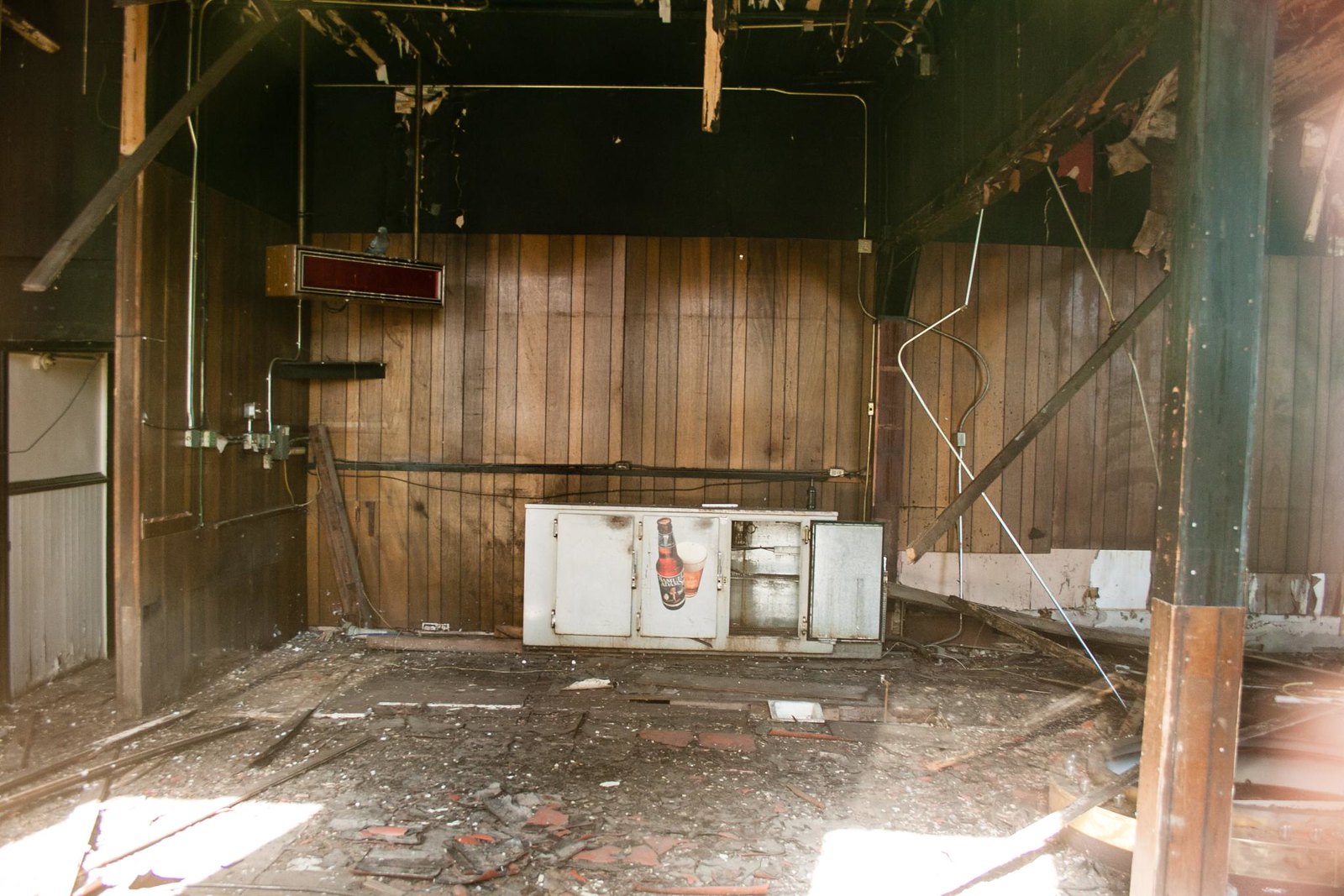 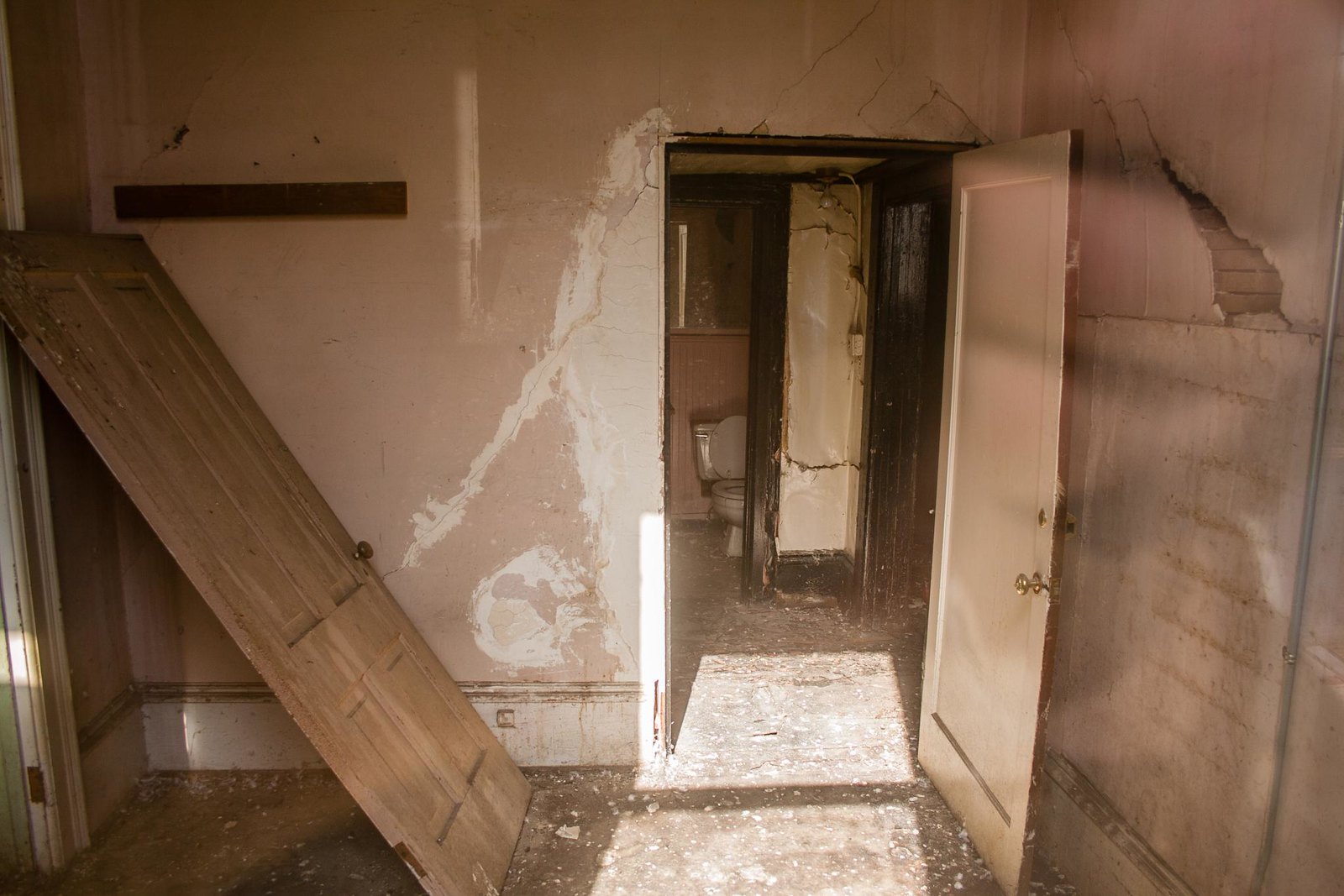 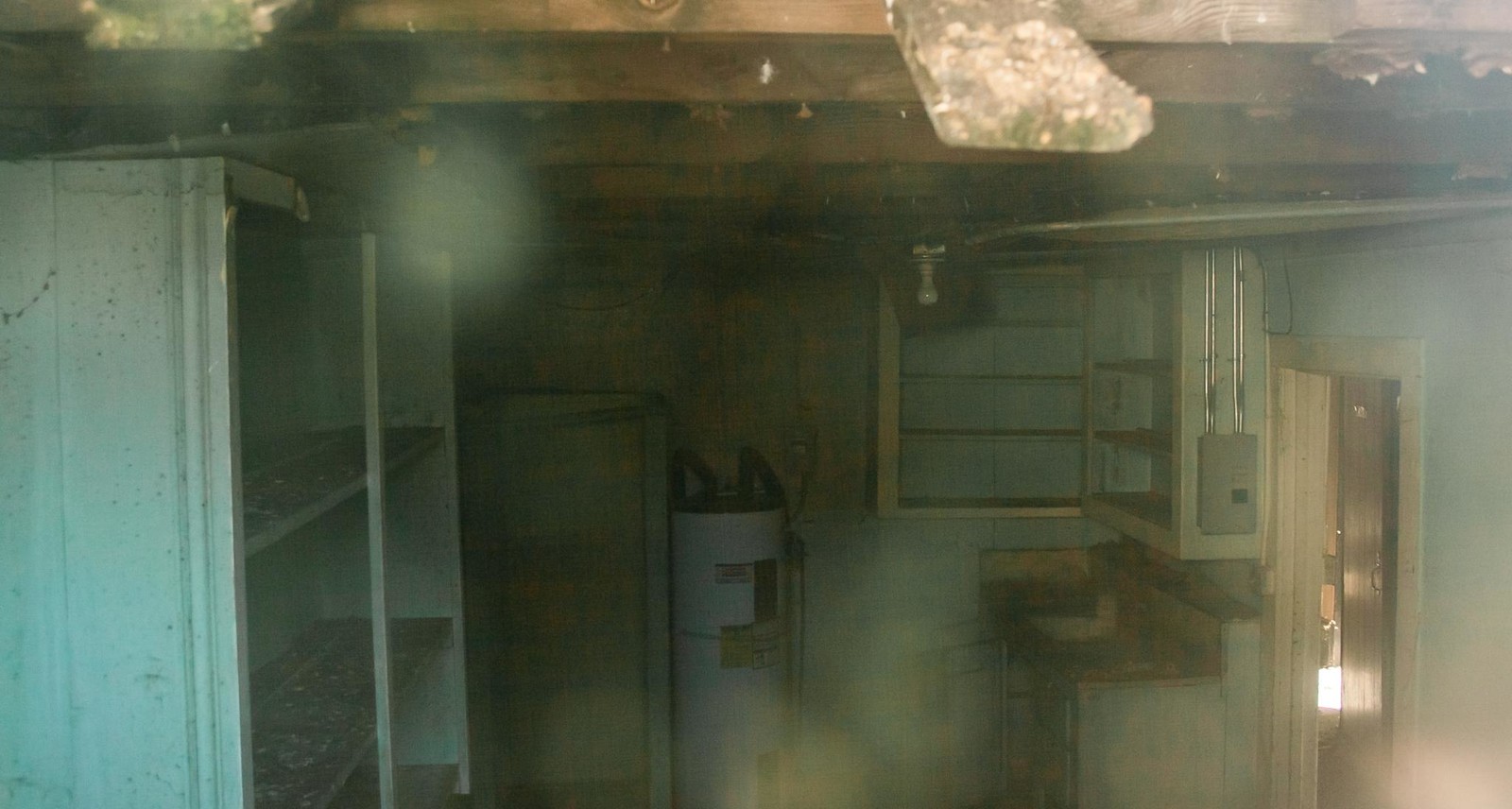 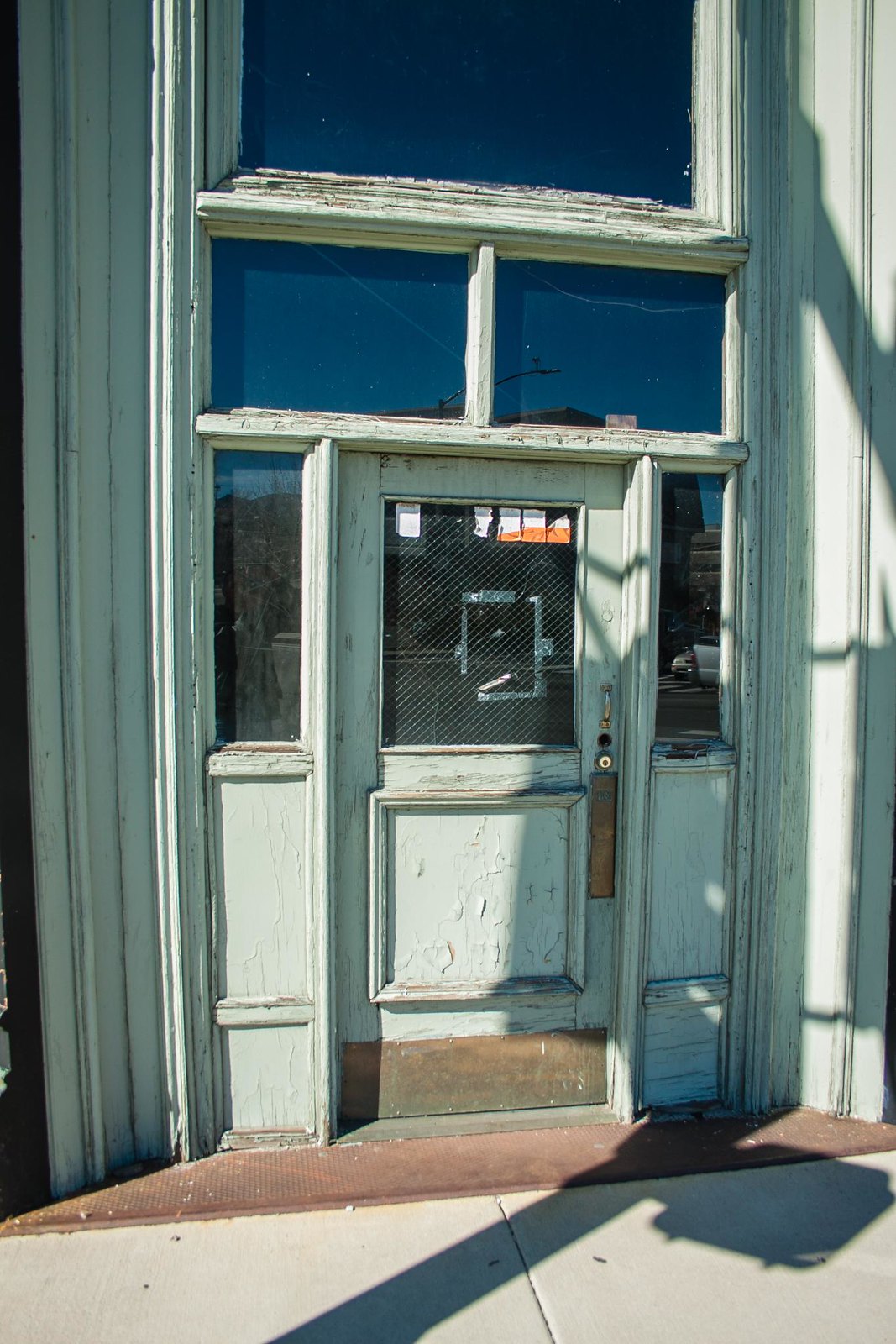 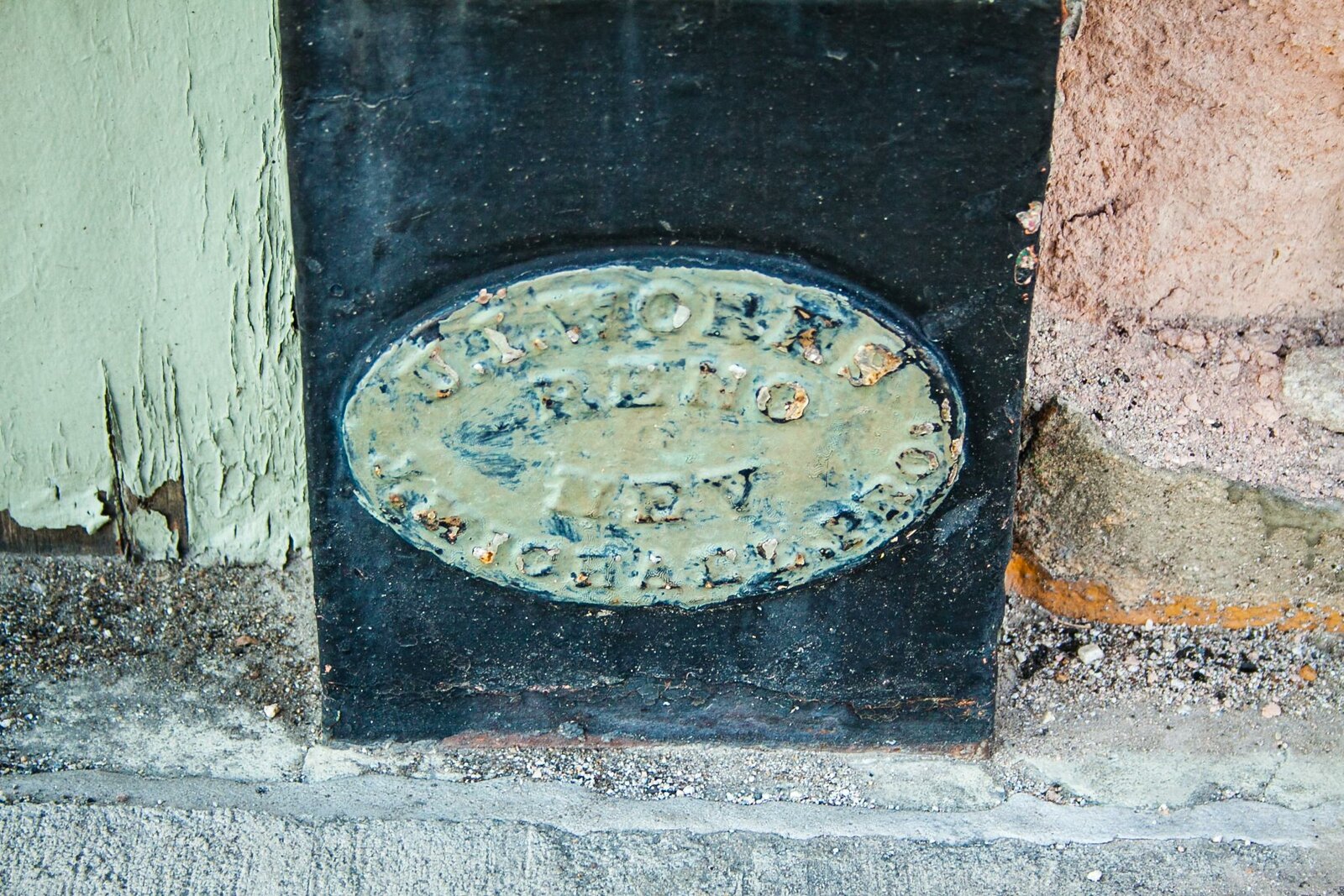 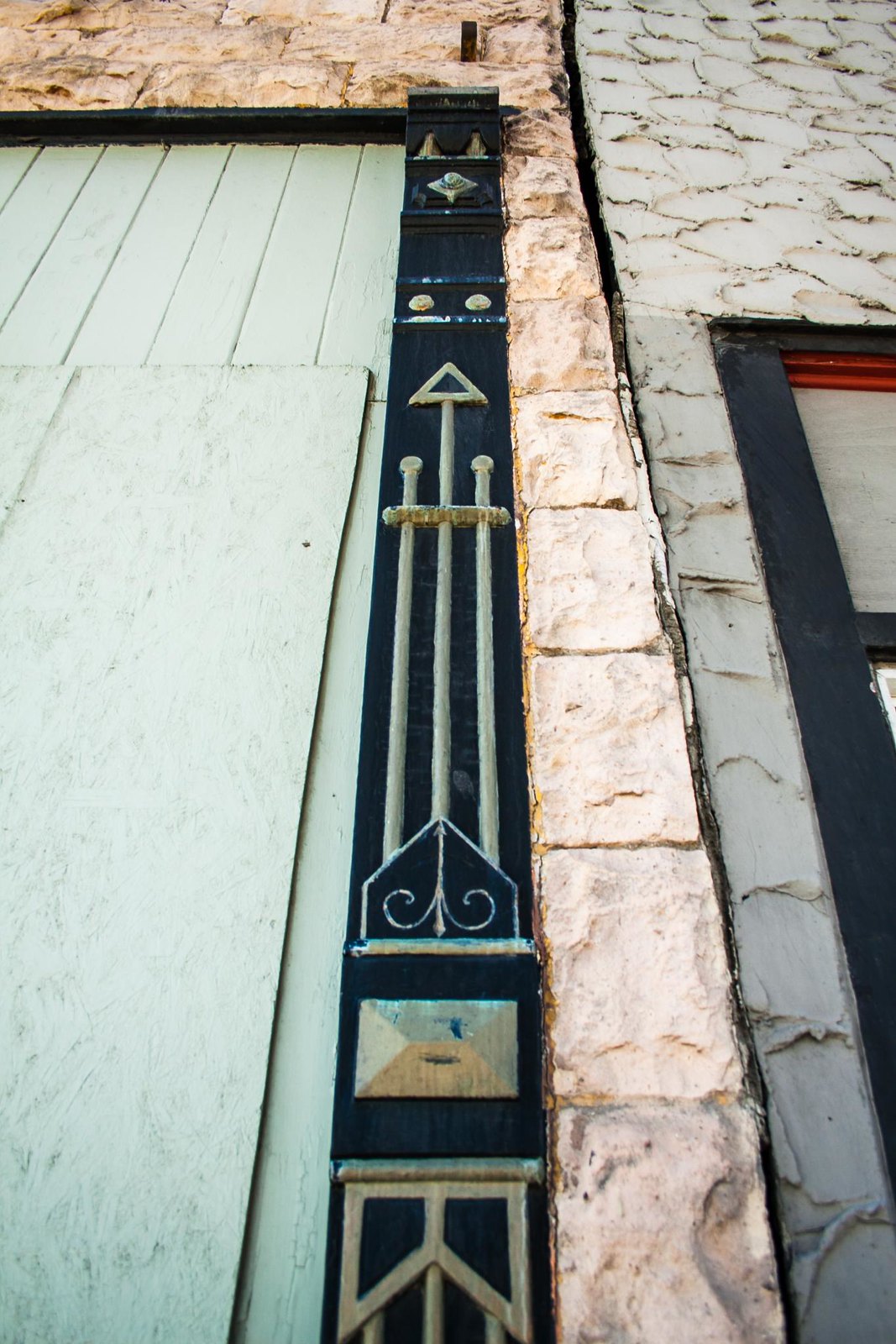 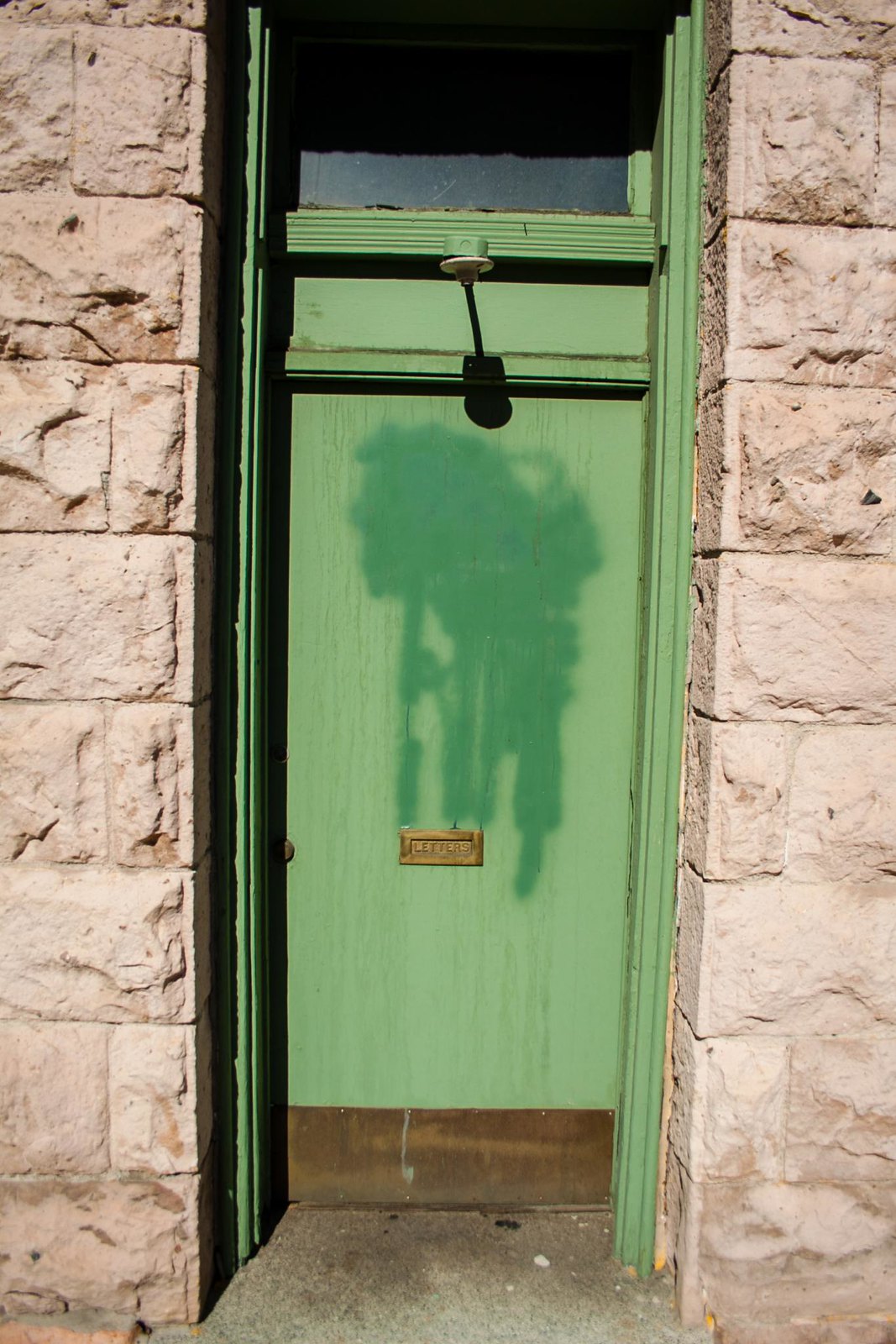 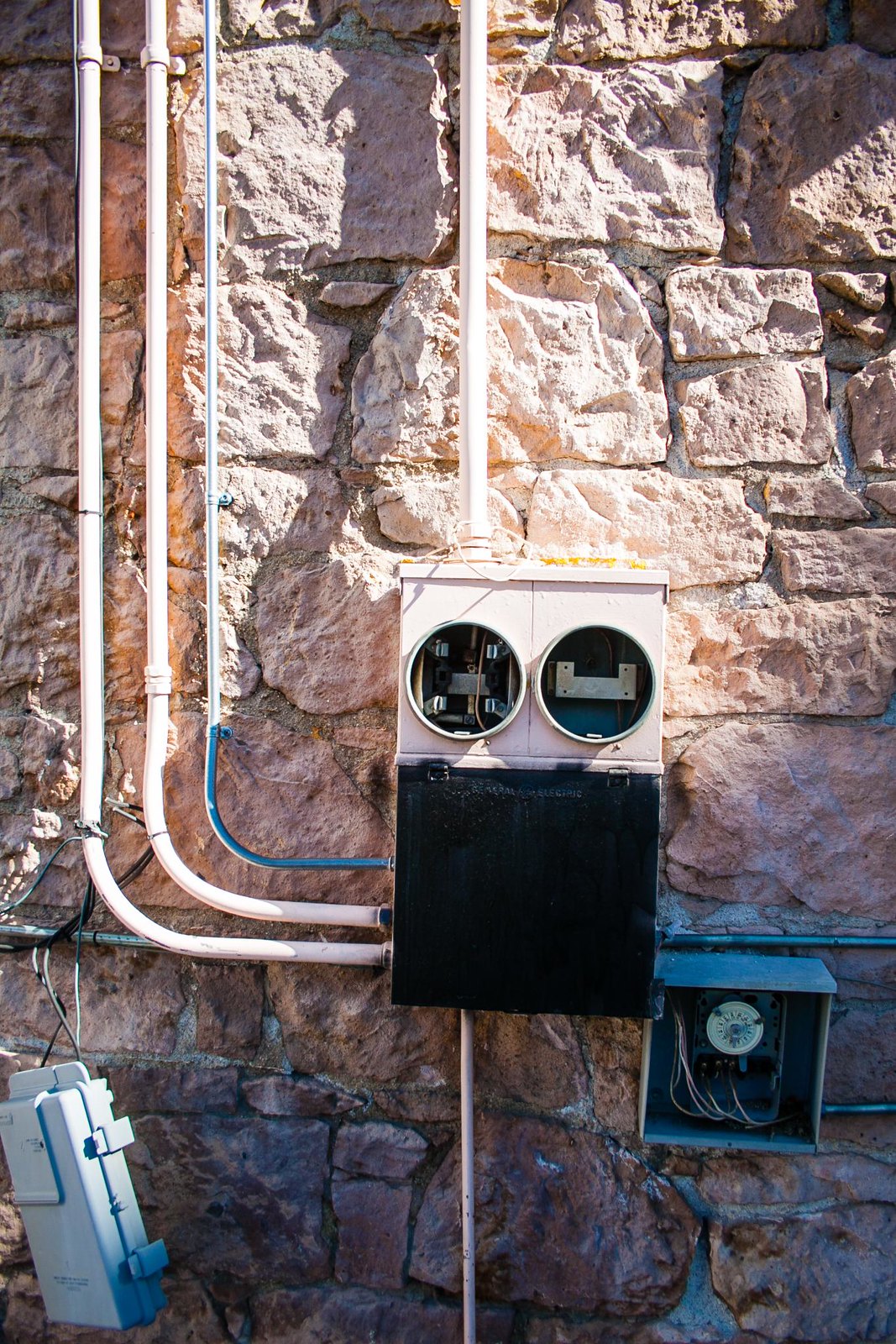 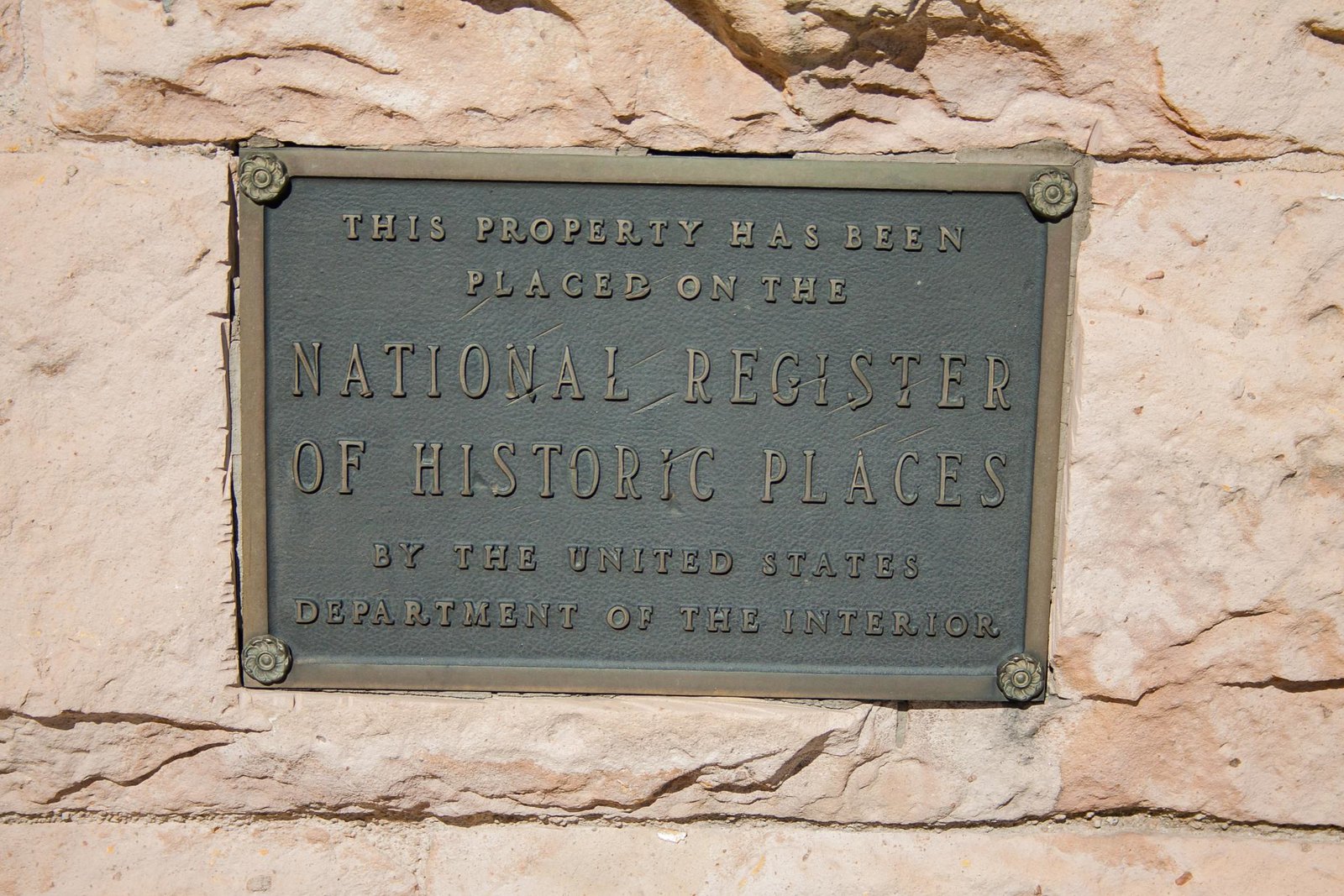 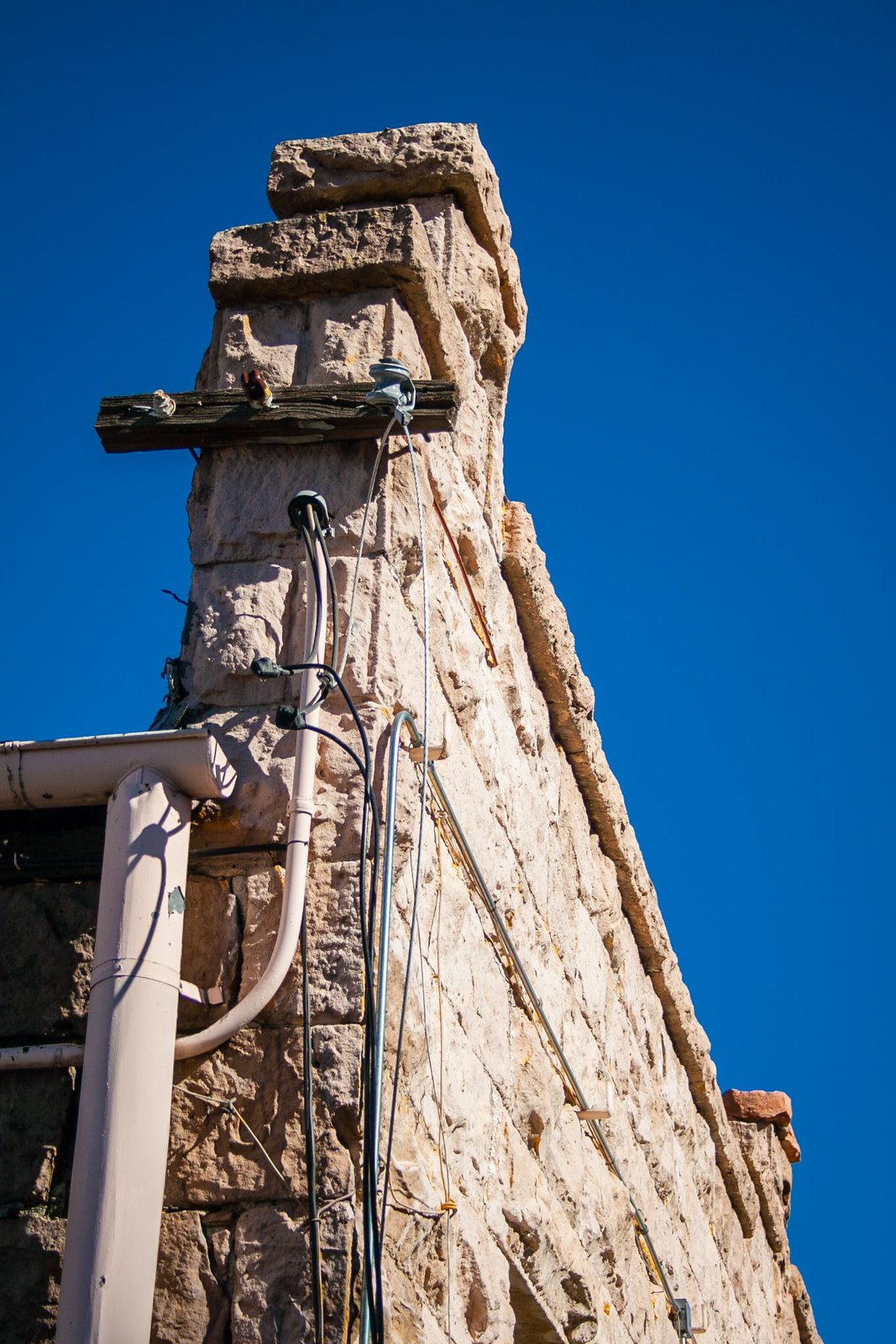 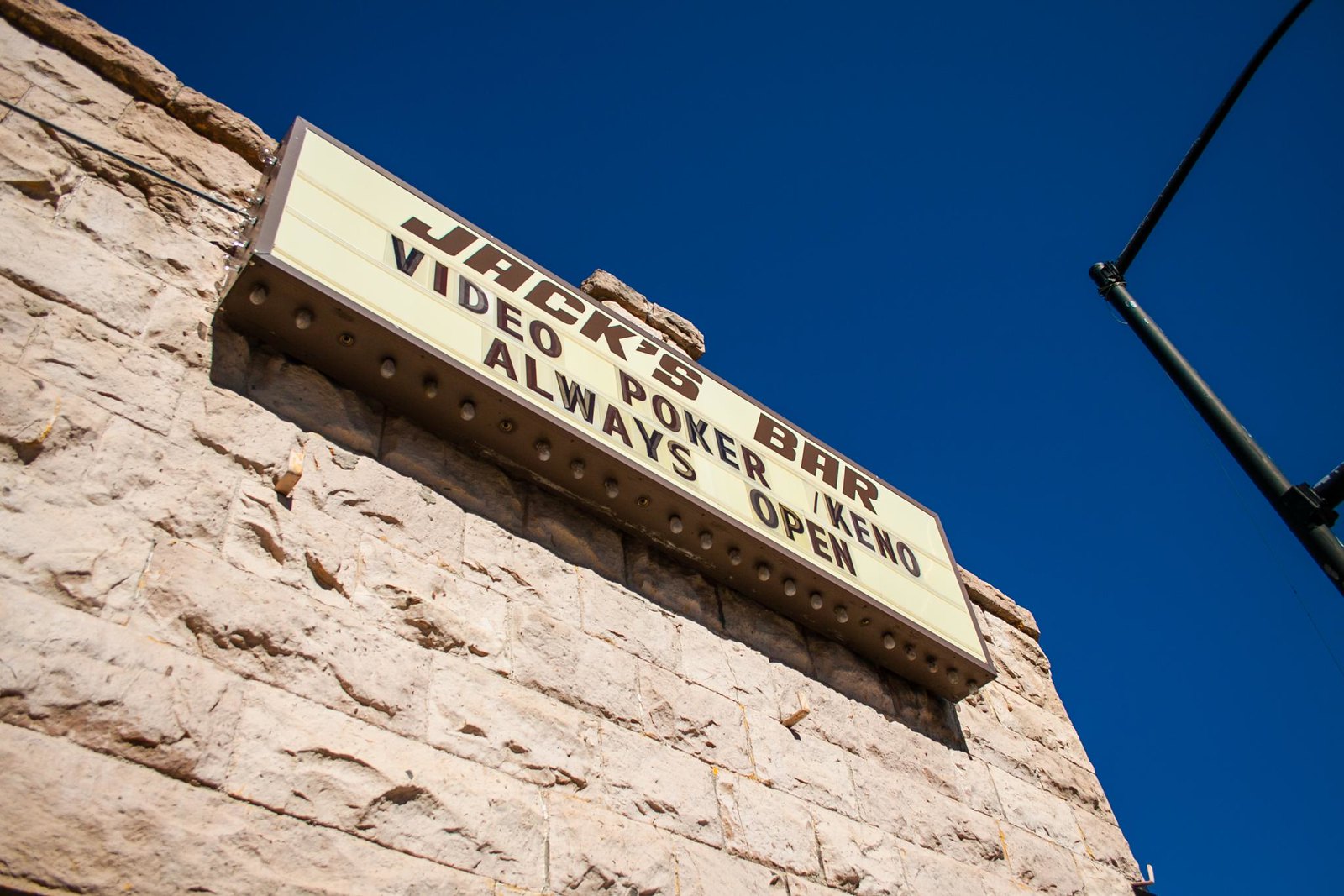 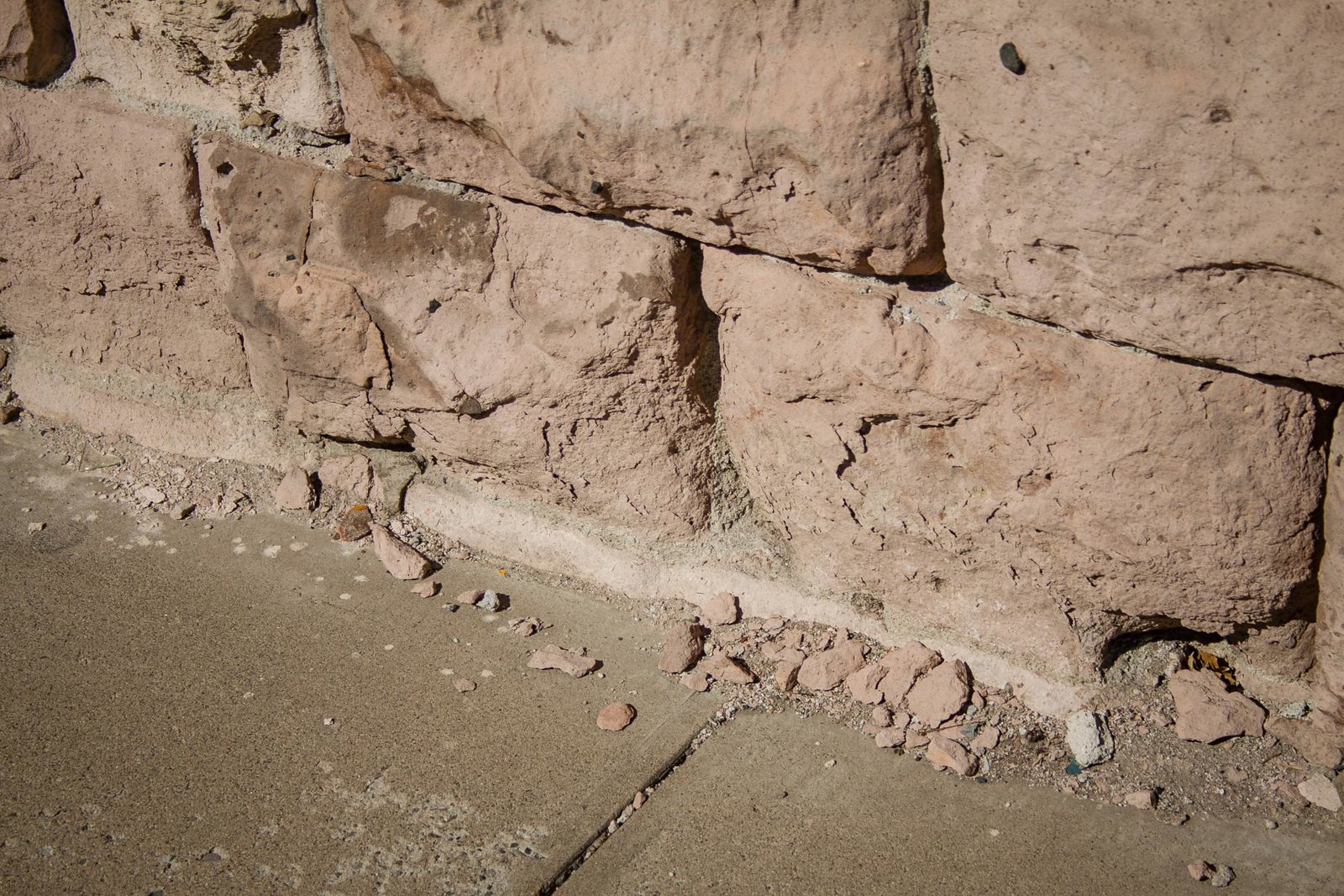 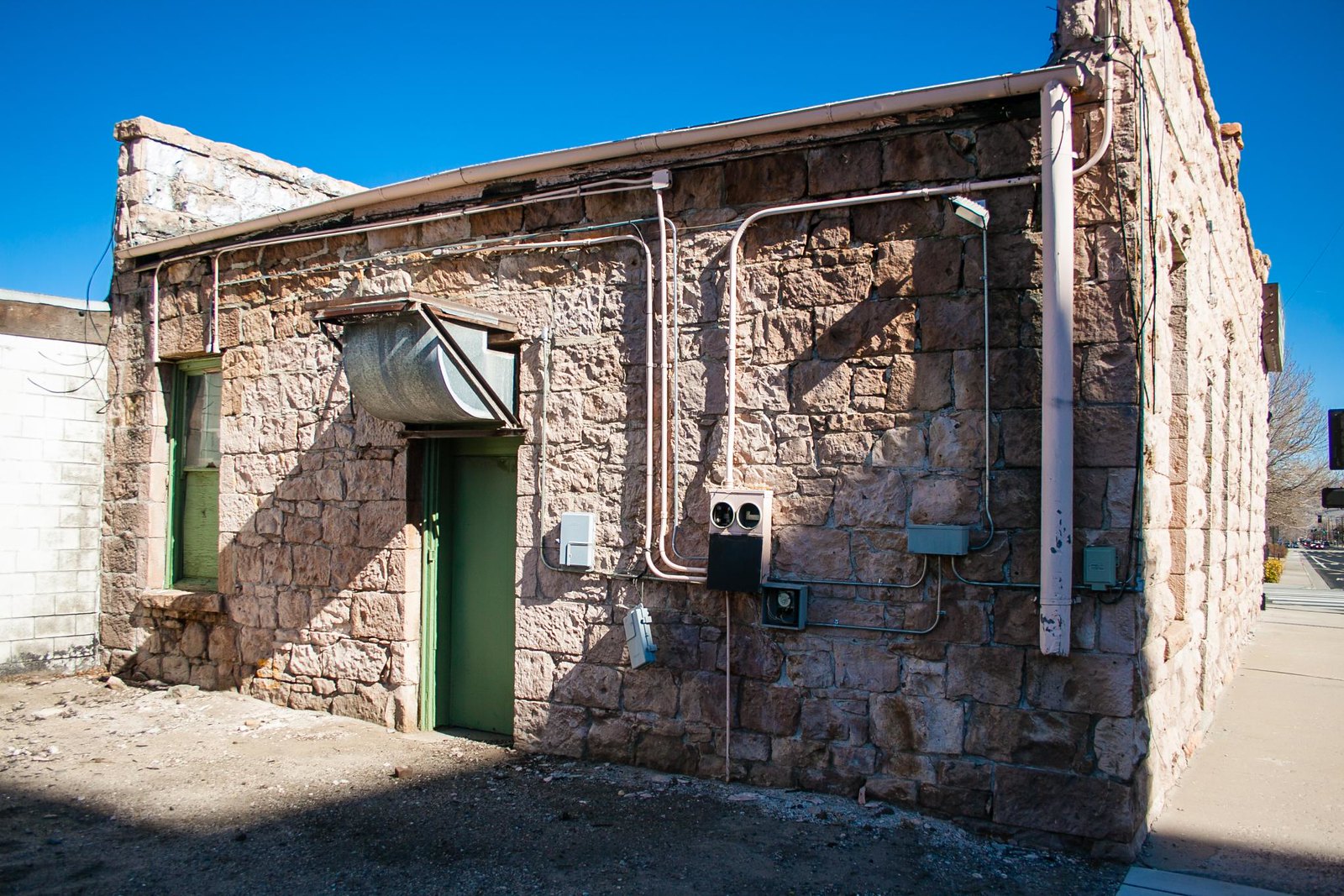