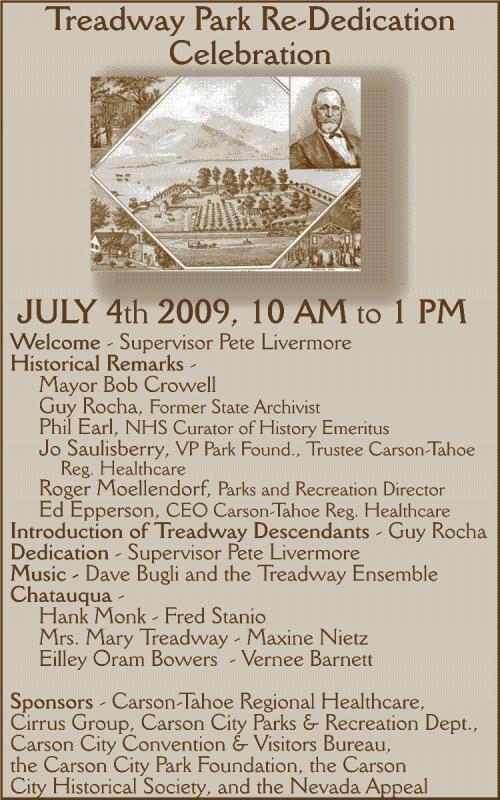 One of the 4th of July celebrations going on around town is the re-dedication of Treadway Park, happening at 10am tomorrow. I wrote about Treadway Park last year. it was Carson City’s first park, privately owned but open to the public (for a fee of course). It used to cover several acres in the area along Washington and Mountain streets where the old Hospital is. But development during the 20th century carved away at it until now all that remains is about an acre of grass and cottonwoods, at the corner of Minnesota and Williams. The park, though now free to use, was still owned by hospital until just recently. Carson Tahoe Regional Health Care is turning the park over to the city at last, so tomorrow the park is being re-dedicated.

The Treadway Park Re-Dedication Celebration will be on Saturday July 4, 2009, from 10 AM to 1 PM. This historic park will be re-dedicated to the city and open to the public.

Guest speakers will include:

Pete Livermore, City Supervisor, will be the Master of Ceremonies

A plaque and monument will be dedicated.

Entertainment and Food add to this patriotic and historic occasion: