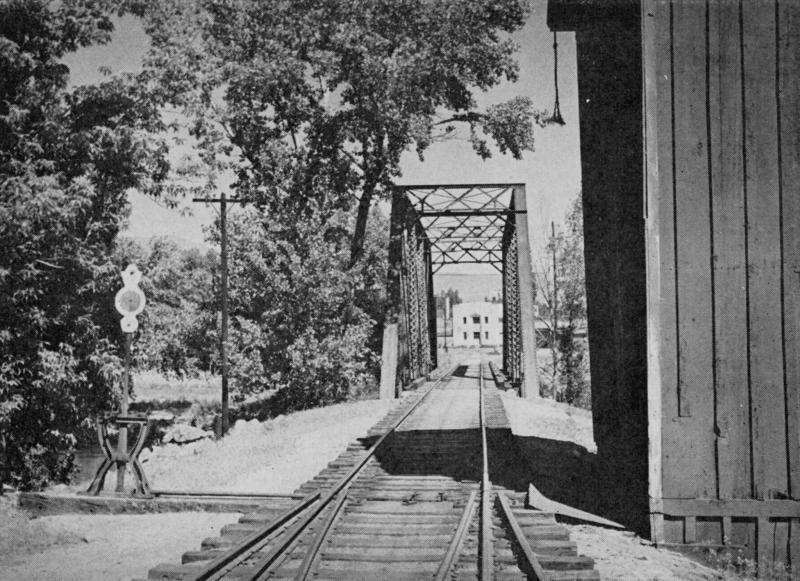 This view sights along the Virginia and Truckee Railroad mainline in downtown Reno. The prominent truss structure ahead of us is the steel bridge which crossed the Truckee River. Depending on which way the train was headed, this bridge either signaled the beginning or the end of a long journey to Carson City, Virginia City, or Minden. Charles Clegg, of the Beebe and Clegg partnership, took this picture in the 1940s while the railroad was limping its way to obscurity.

To the right of the photo is the V&T’s Reno water tank. Engines would stop here to fill up on cool water for the long, dry trip down south. On the left is one of the V&T’s distinctive harp switch stands, connected to the three-way stub switch at the bottom of the photo. The switch here is set to the middle, which was the mainline. The other switches went to a siding where one train could pull off to wait for another, and the turntable, where engines could be turned around to make sure they were pointing the right way for the trip to Carson. Directly behind the photographer is the V&T Reno Enginehouse, a single-stall wooden barn that served the railroad well until it caught fire and burned in May 1950, one month before the railroad was scheduled to go out of service. This was the blaze that destroyed Engine #26, which was locked in the enginehouse at the time.

Straight ahead in the distance, perfectly sighted down the railroad tracks, is the Southern Pacific Freight House. This building was built in 1931 right next to the SP mainline in Reno, just a couple of blocks east of downtown. Although it seems like the V&T tracks run smack into the Freight House, they actually curve to the left and travel one more block to the old passenger depot on Commercial Row. This depot for decades served two railroads: the SP out the north door, and the V&T out the south. There were also crossover tracks in the yard here, so cars and engines could be switched from one line to the other, as they often were in the early 20th century. After the V&T was abandoned in 1950, the rails were all pulled up, the water tank torn down, the smouldering ash of the enginehouse swept up, and the bridge dismantled for scrap. This land was then put to other uses, especially the land on the other side of the river. The Freight House remained standing, but much of the rest of the land was plowed under for parking, office buildings, a fire station, and directly across the river from our scene, a two-story motel. All of these buildings had the effect of cutting off the view of the Freight House from the river, and eradicating all trace of the V&T from downtown Reno.

It stayed this way for decades, until 2008. This was the year that redevelopment came to the old railroad yards. On the south side of the river, the site of the enginehouse and turntable was cleared away for a new housing development, but a slumping economy put the brakes on the development. Things went a little better on the other side of the Truckee. The land just adjacent to the Freight House was designated to be the home of Reno’s new minor league baseball stadium. Development on this project was fast-tracked, and in the spring of 2008 the firehouse and old motels on the site were torn down. And for the first time in decades, the Freight House could be seen from the south side of the river again.

This photo was taken in December 2008 by Mike Van H of downtownmakeover.com. It looks across the river from the south bank, sighting almost perfectly along the old rail line. The bridge is long gone, but the old abutments still sit here along the river. One of the new office buildings from the 20th century rises on the left of the scene, and on the right the new baseball stadium is rapidly taking shape. Once the stadium is done, city leaders are hoping it will anchor a whole “ballpark district”, full of retail and office space and becoming a must-see destination for anyone visiting Reno. The Freight House will be part of that redevelopment, and so undoubtedly will be several new buildings clustered around this area. Those buildings surely will rise near the middle of our scene here, again obscuring the view of the Freight House from the river.

So this is a short window of time we have here, to be able to look from the site of one piece of Reno railroad history across the river towards another, and try to imagine the bridge that used to span the gap.