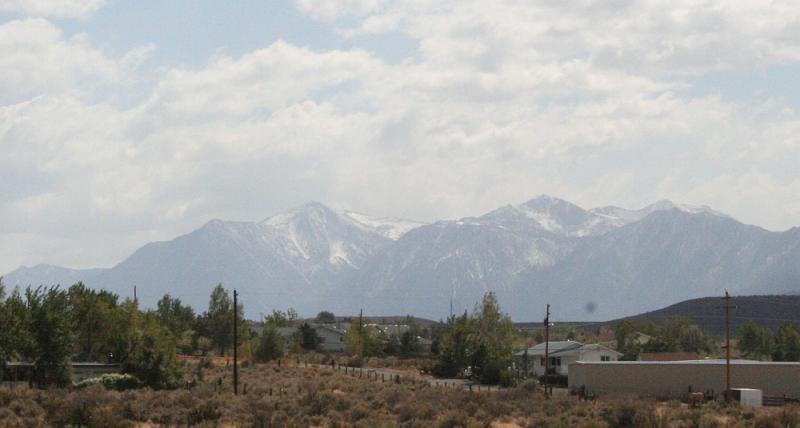 This isn’t the ideal photo I would have taken, it’s a little hazy and far away. The afternoon glare made it hard to get anything better. But still, even in this photo you can clearly see the results of last night’s snowstorm on Job’s Peak.

Yes, we knew there was going to be rain coming in late this week. Or, “rain” I should say, because I’ve learned not to trust the weather reports when they call for precipitation. Usually it either ends up not coming at all, or ends up being a far cry short of what we were promised. So I didn’t put much stock in reports that we would get rain in Western Nevada this week.

Last night we even went up to Lake Tahoe, and there was no sign of any moisture coming. There were a few scattered clouds, and it was unseasonably cold up on the beaches, but that’s all. So when I poked my head out the door late last night, and saw that it was actually raining, I was both shocked and impressed. It actually came true, for once. But that didn’t prepare me for looking up at the mountains earlier today and actually seeing snow on the peaks. Even the weather reports I saw didn’t predict that one. This is probably one of the earliest first snows I’ve ever seen.

But I’m not letting it fool me. We always get chilly weather around the end of September, and you think that means summer is blissfully over and you can start to enjoy fall, but it’s always a fakeout. By the middle of October it will be 85 degrees again, and we’ll all be wearing shorts and t-shirts for the Ghost Walk, just like usual.

As for the rain that’s still predicted for this weekend? Last night’s storm actually has me feeling optimistic.