I thought this went out with lava lamps and pet rocks, but apparently not. Douglas County this week has been chip sealing Johnson Lane, apparently in a desperate bid to get residents to hate the county road department even more. 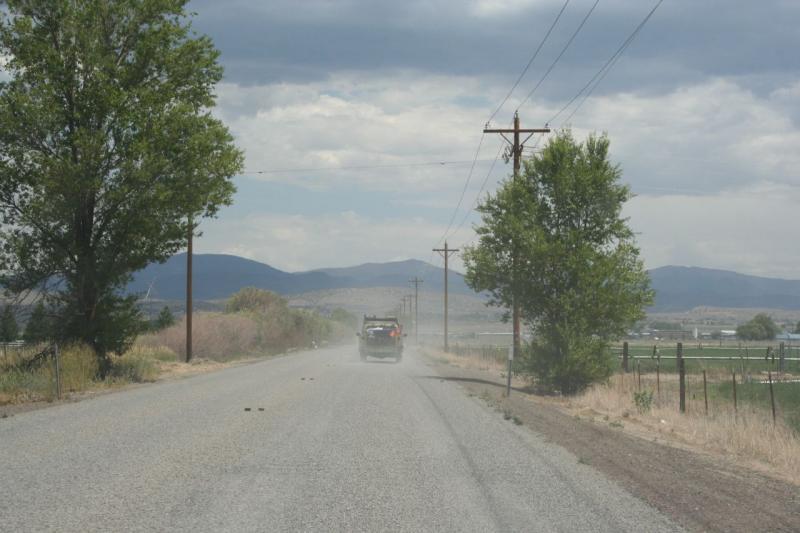 If you’ve never heard of chip sealing, consider yourself among the more fortunate. It’s what road departments do when a street needs to be repaved, but they’re too cheap and lazy to do it right. It basically involves spraying a layer of oil on the road, then dumping a bunch of little rocks on top of it. The rocks that stick to the oil become the new road surface. The ones that don’t end up in your windshield. Chip sealing is about the cheapest form of resurfacing a road that’s out there, and that’s why you see it in use so much. Or at least you used to see it. There hasn’t been a lot of chip sealing in the area lately that I’ve been aware of, but now that Johnson Lane has been done I know it’s still in use and it’s still thought of as a good idea for big projects.

You can see in the picture above the amount of dust that gets kicked up when you’re driving on a freshly chip sealed road. Along with that dust there are also loose rocks being thrown everywhere. And even after the road has “cured” and all the loose rocks have been swept away, you still have to deal with the other side effects of chip sealing. It creates just about the ugliest road surface imaginable, a dull grey with millions of little pock marks. It’s also one of the noisiest surfaces out there, as your tires run over all those little tiny rocks and their little tiny sharp edges. In the mood for needing new tires?

There are better alternatives, but I guess they were too costly. A fresh layer of asphalt is the best, of course, but also the most expensive so I can see why they wouldn’t go that way. But there are a variety of other ways to surface a road, including one of my favorites, slurry sealing, where the rocks are mixed in with the oil to form a kind of chunky peanut butter that is spread over the road. It forms a much smoother, much quieter surface that’s actually black (my fault for being a traditionalist and wanting my roads to be black). Plus, the rocks are trapped in the tar, so there’s no dust and no flying debris.