The winter of 2006 didn’t see a whole lot of action at the Ormsby House. But there were a few notable things, enough to fill up this page. So let’s dive in. 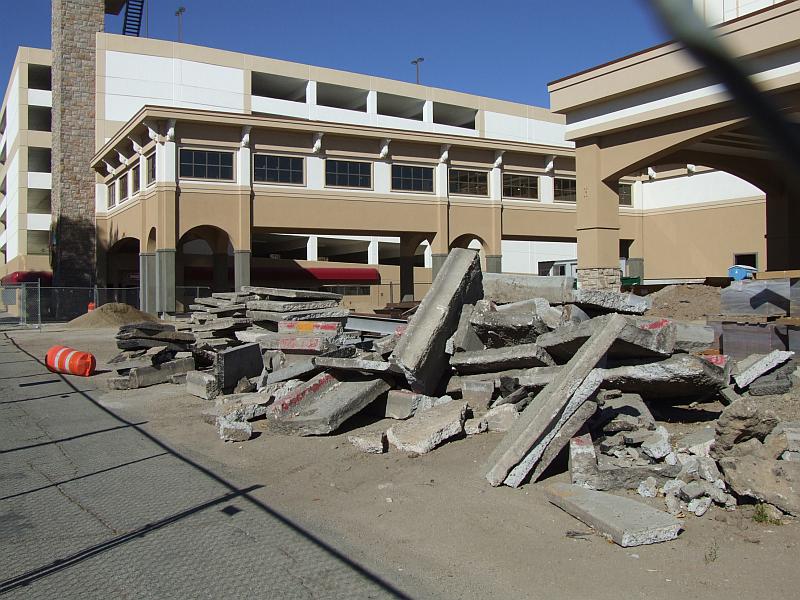 Here’s the pile of rubble left behind from when they demolished the sidewalk. The whole sidewalk along Carson Street, between Fifth and Seventh Streets, was ripped up and dumped here next to the portecochere. It stayed here for a couple of months before they hauled it off to the dump. 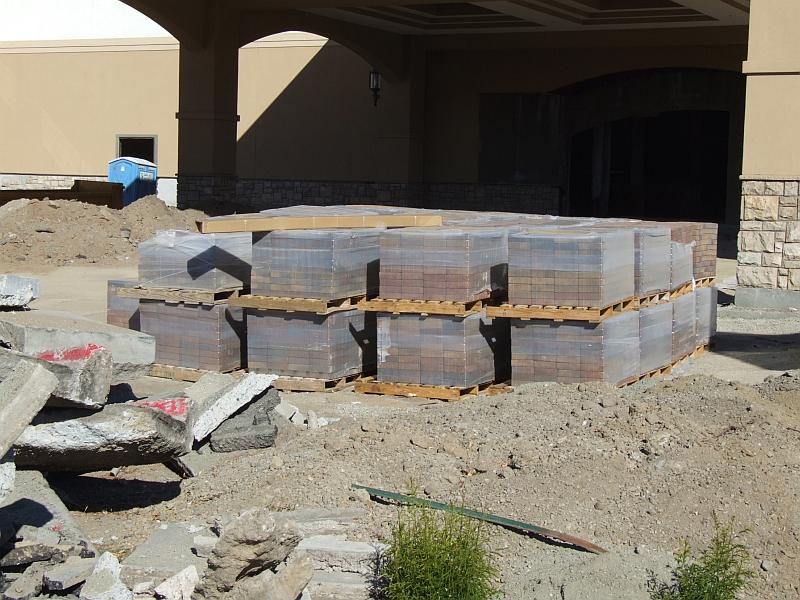 But why did they rip up the sidewalk? Because they were prepping to install the new sidewalk, made up of these paver bricks. 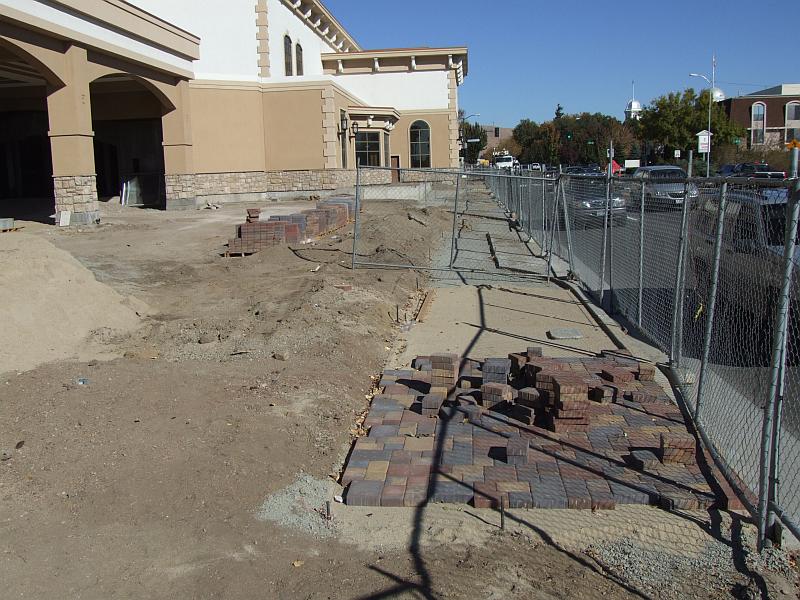 In October of 2006 they started laying the bricks. Actually, they layed this little strip, then left it alone for a week or so. The owners had promised that the sidewalk would be finished by Nevada Day, October 28, and they just barely made it. 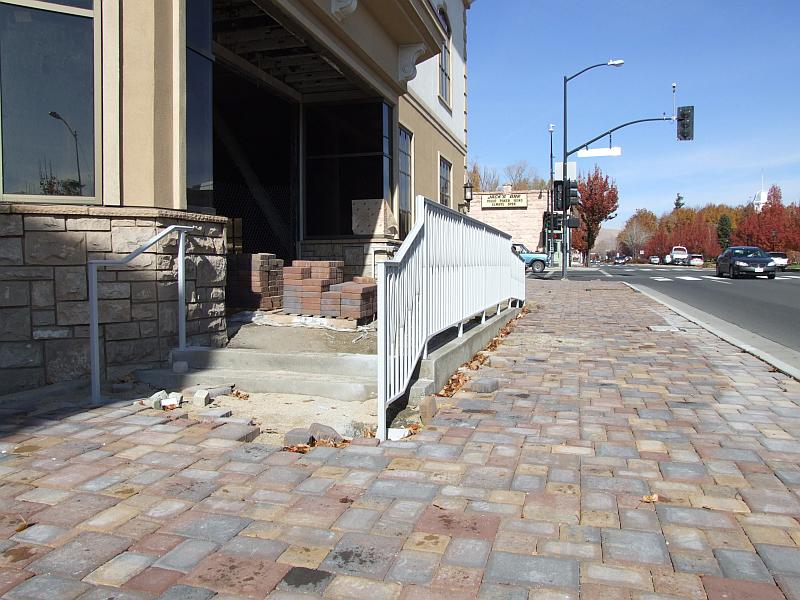 Just barely. Here is the sidewalk, as of the first week of November. After Nevada Day. As you can see, the sidewalk was there, in spirit, but it wasn’t exactly finished. 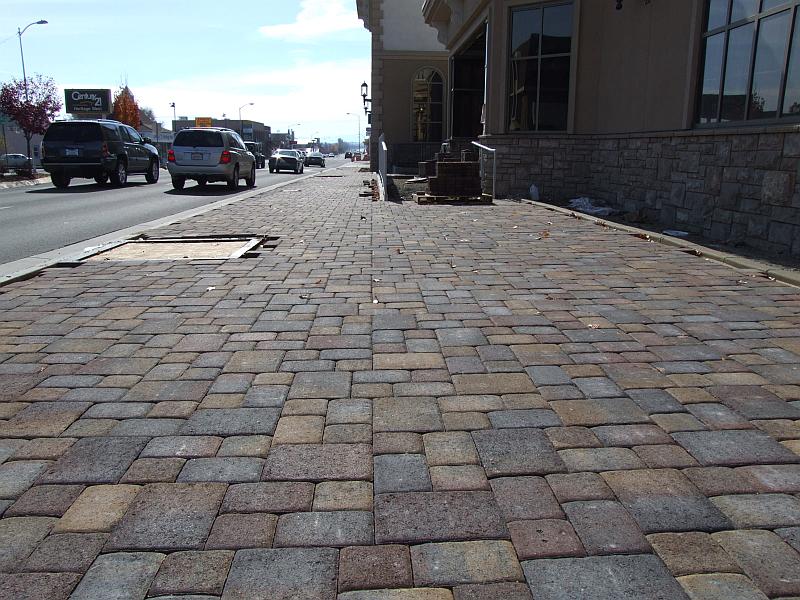 It’s still pretty rough around the edges, but the bulk of the sidewalk looks really nice here. Great use of color and varied shapes and sizes for the bricks. You know, I beat up on the Ormsby House a lot for how slow they’re progressing, but you’ve got to admit that once they finally do some work, the results are really top notch. They could have just laid down a slab of concrete here, but they put the effort into doing it right. Bravo. 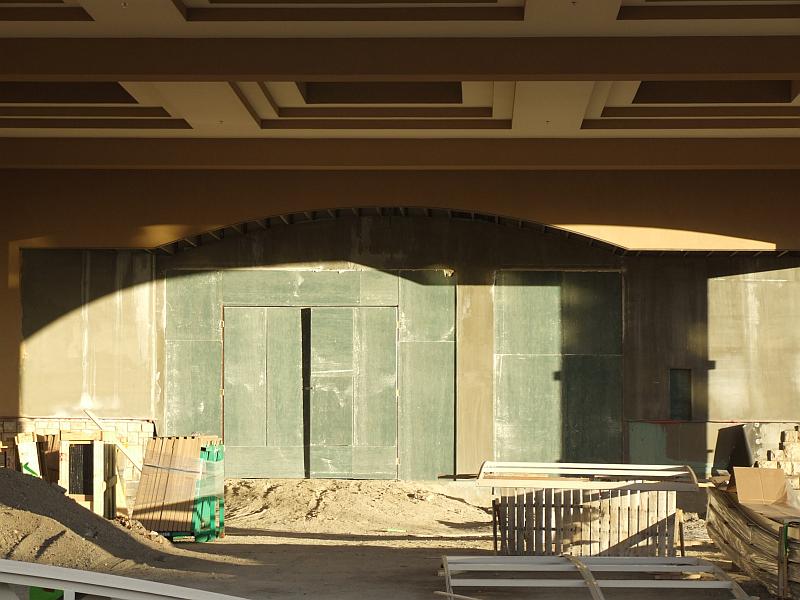 In December they sealed up the main entrance with these makeshift temporary doors to keep the cold wind out. I’m taking this as a good sign that they’re finally getting serious about working inside the casino and want to heat the place up. 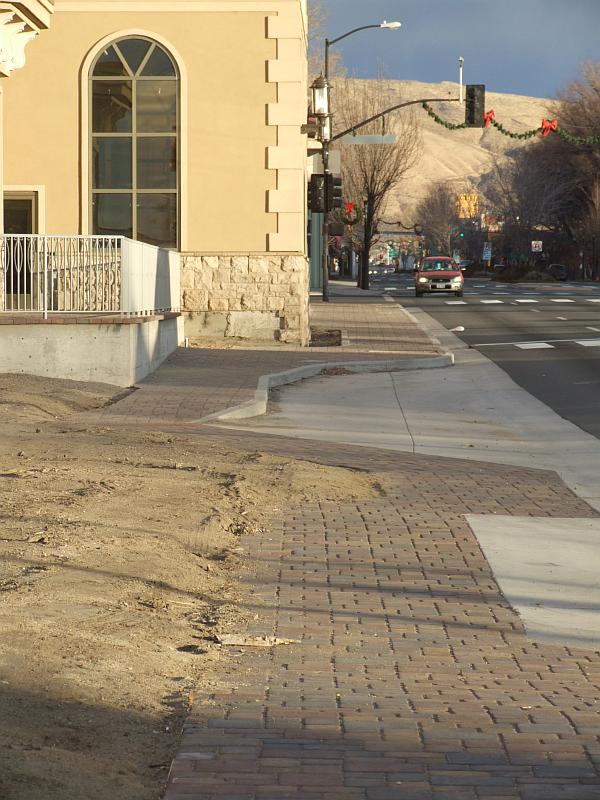 Back to the sidewalk. By December it was all finished. It kind of meanders around more than the old one did, because they put in that new turning lane for the driveway there and the sidewalk has to jog around that. But once it was done it was looking nice. 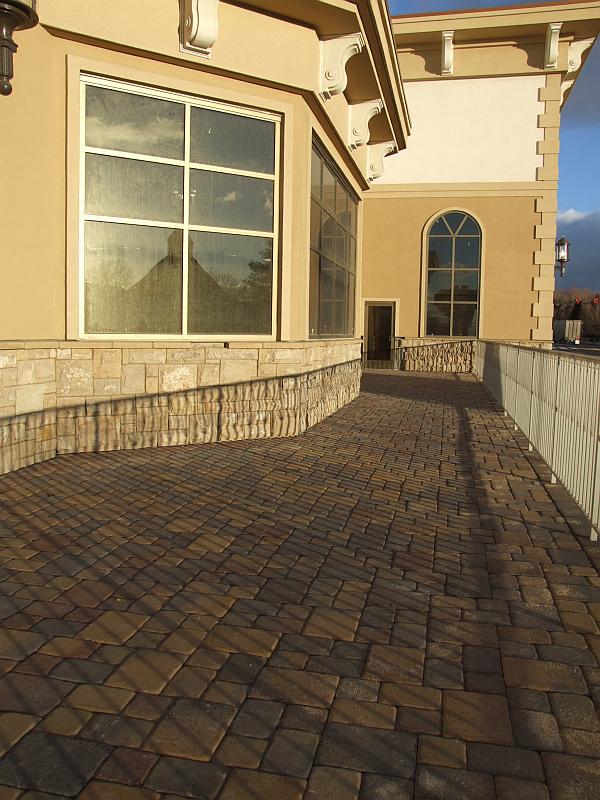 Here is one of the patios, right outside the big bay window that’s going to house the Quiet Bar. This patio got the paver treatment too, and they’re probably going to throw a few tables and chairs out here when they open so you can enjoy your drinks in the open air. 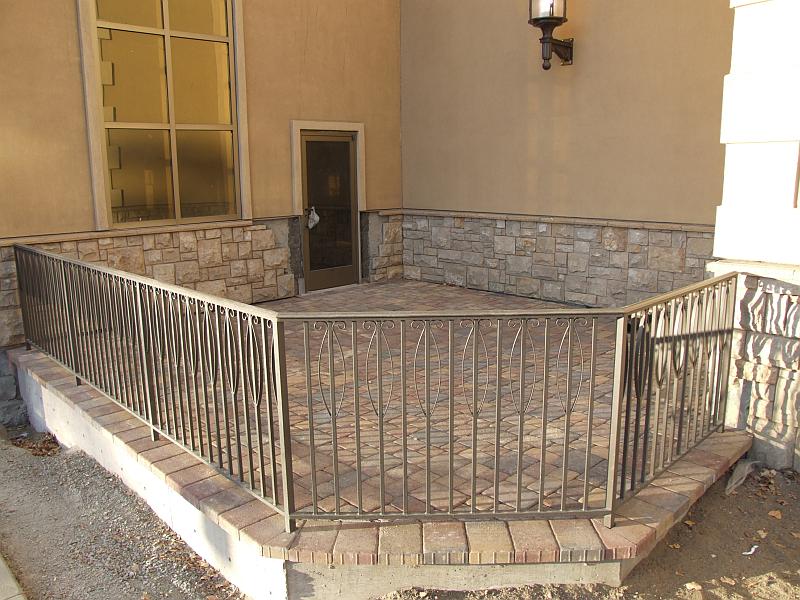 This smaller patio is on the north side of the Noisy Bar. 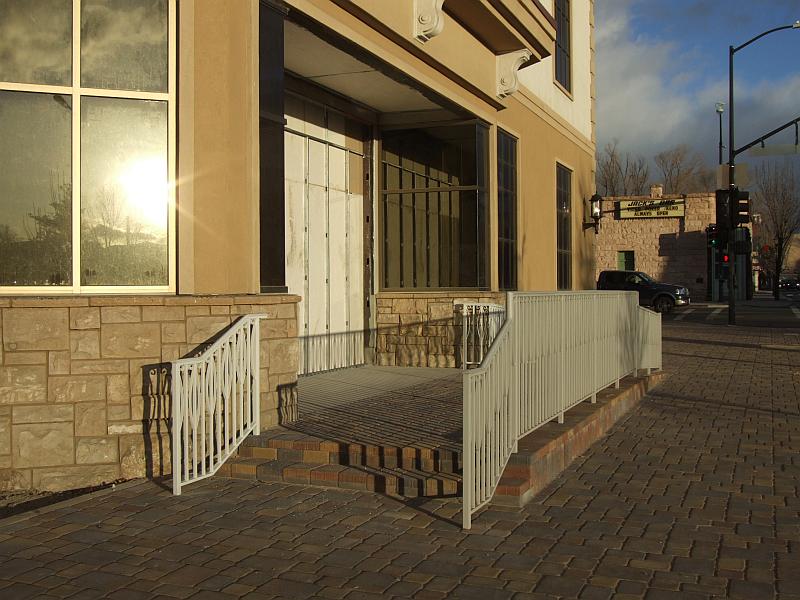 The Carson Street entrance here also got bricks all the way up, both the stairs and the handicapped ramp. And here, too, they put up some temporary doors to keep out the cold. 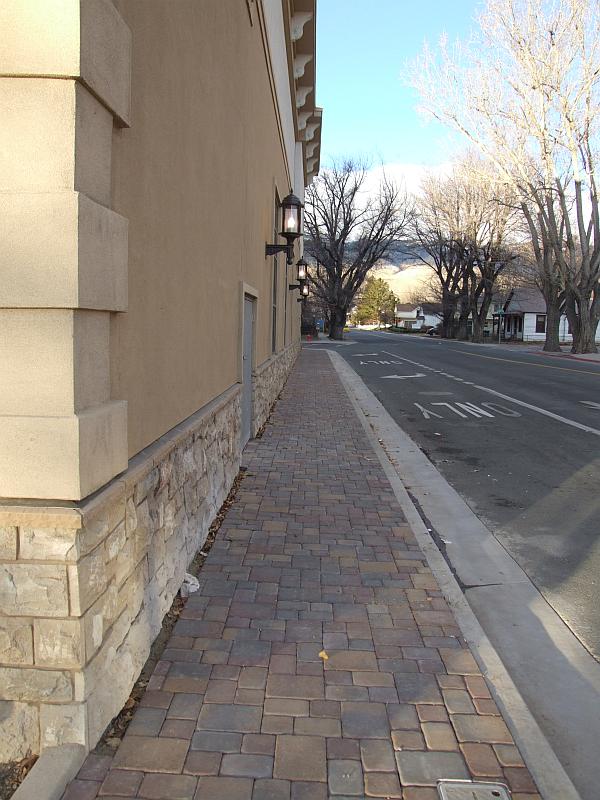 And the sidewalk wraps around the north side of the building, running all the way down Fifth Street to Curry. Finishing the sidewalk finally let them take down the chain link fence they had surrounding most of the property, so you no longer have to cross to the other side if you want to walk down the street. 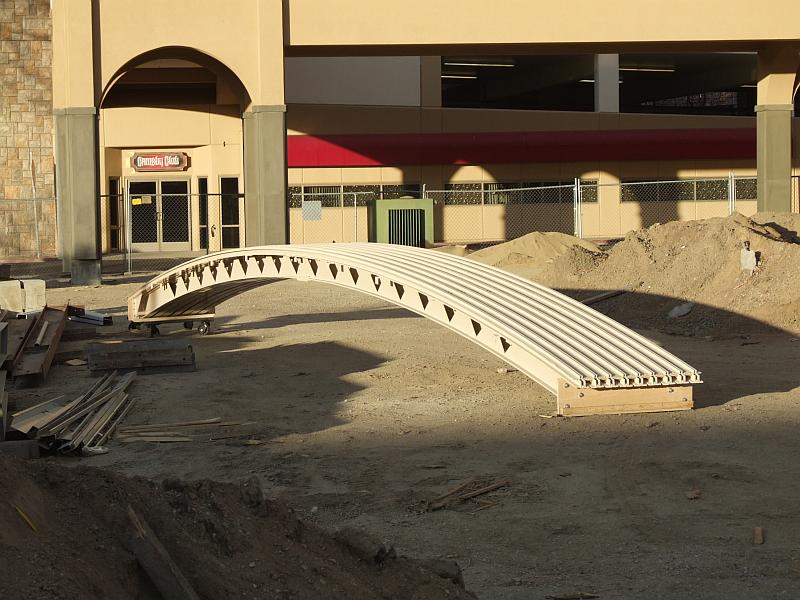 Another project they were starting on began with the delivery of these curved roof joists. At first I wasn’t sure what they were for, but I soon found out. 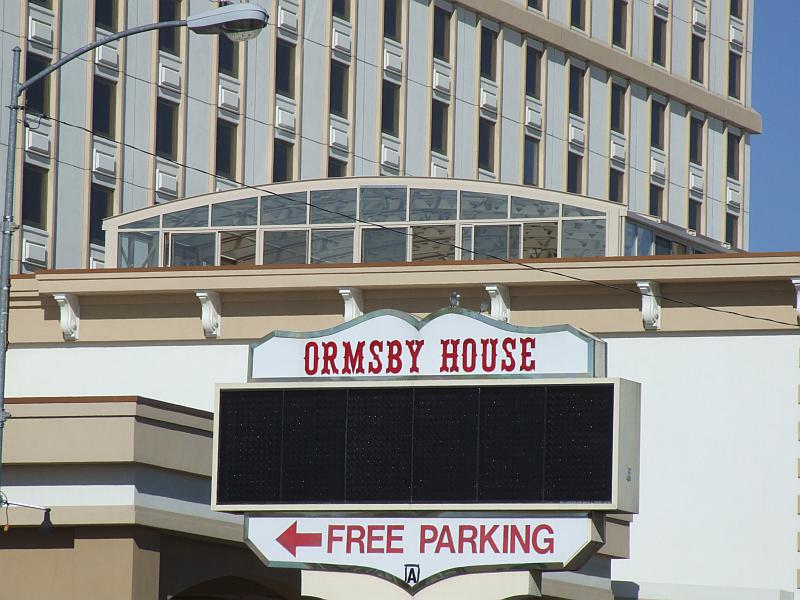 They belong to the new rooftop solarium they built in January. This glass enclosure brings the hotel pool, which used to be outdoors, indoors. This way the pool, which used to be closed for a few months during the winter, can stay open and heated year-round. And as you can see on Page Three of my Ormsby House Tour, there is even a little extra room inside there for a few deck chairs, maybe a small bar so you can sip a cocktail while sitting poolside. Even if you’re not outside, strictly. 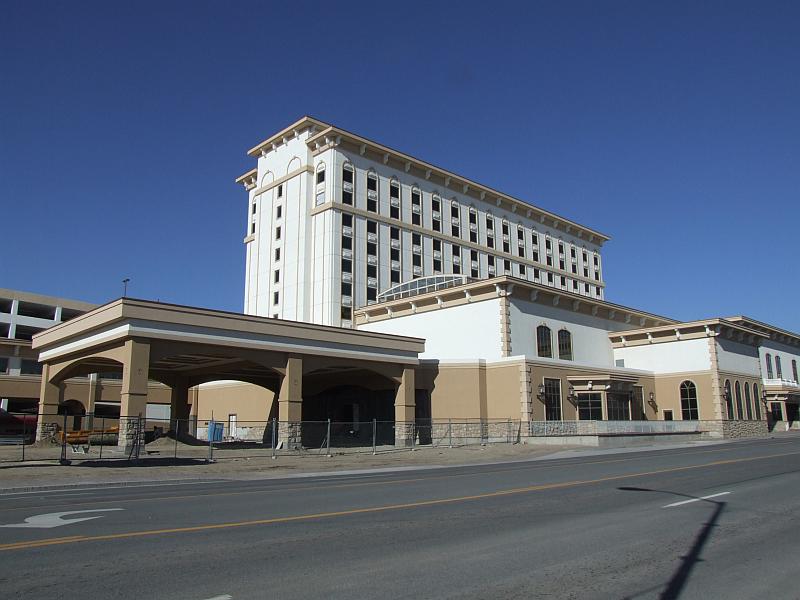 So that’s about it. There seems to be a lot of activity inside; people are coming and going every day. So maybe 2007 will actually bring us some real progress on the Ormsby House, and we might be closer than ever to that elusive opening date.

At least we can walk on the sidewalk now.