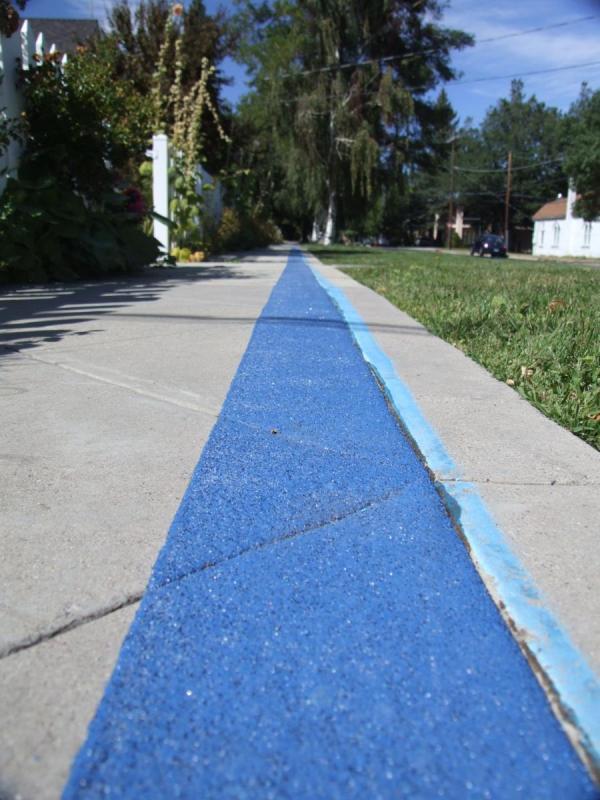 Sometime over the summer they repainted Carson City’s Blue Line. This was desperately needed, because the line was getting faded, scuffed, and in some places it was even flaking off in large chunks.

The Blue Line is part of the historic Kit Carson walking tour of Old Town Carson City. By following the blue paint on the sidewalk, you are taken along a winding path through the city’s old neighborhoods, bringing you past the Governor’s Mansion, the historic churches, and many of the old houses. Paired with the brochure available at the Visitor’s Center, you can see most of the cool old buildings on the west side just by walking the line.

But when the Blue Line was in its sorry state last year, it was hard to follow at all in some places. And where you could, you started to wonder if this was the best Carson City had to offer. But now it’s shiny and new again. And I mean shiny literally. Because this isn’t just a coat of Glidden or Dutch Boy, it’s actually a sprayed-on concrete product with little sparkly bits in it. You can see in the picture how it has a distinct texture, and when the sun hits it just right it sparkles like diamonds. And, since it’s concrete, it should last as long as the sidewalk without needing to be reapplied.

So if you’re in the mood for a walk, just get outside and follow the Blue Line. It should be a lot easier now.