The big, long building on the right is Meyer’s Mercantile Company. This was Minden’s general store, as well as housing the offices of the Dangberg Company, which owned the town. Meyer’s Mercantile was already an established business in Carson City, and by opening this Minden branch they were able to make a lot more sales to Carson Valley ranchers. The V&T Railroad tracks ran right up to the back door of the store, which helped when it came to keeping items in stock. This store soon was one of the largest general stores in the state, with customers as far away as Mono County in California. In this picture you can see a couple of horse and wagon teams ready to go out with a delivery.

Behind Meyer’s Mercantile is the Minden Flour Milling Company, one of the big businesses in town. It was built by the Dangberg Company, and the board of directors was made up of the most powerful families in the Valley: Dressler, Dangberg, Springmeyer. The mill had four silos that could hold 65,000 bushels of grain, and it was capable of producing 100 barrels of flour per day. Soon the demand for Minden Flour was so great that the plant could hardly keep up.

A lone Model T sits parked on Railroad Avenue, probably brought in on the V&T by the COD Garage, like so many of the Valley’s early automobiles were.. 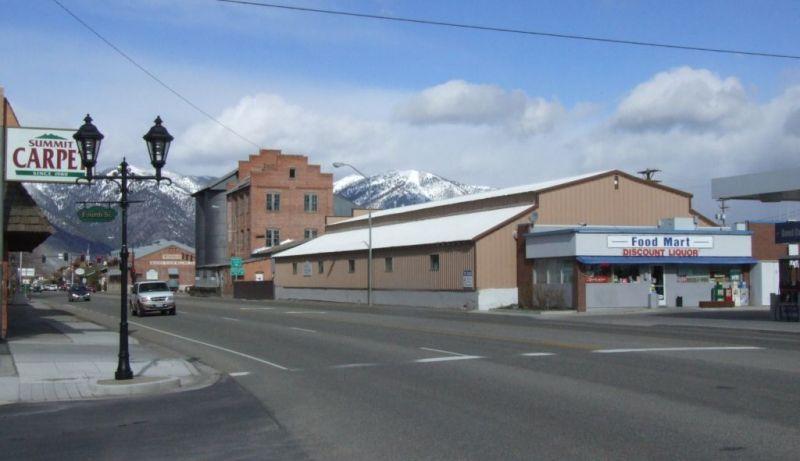 Minden has come a long way since those early days. Railroad Avenue is now the route of Highway 395, the main road through town. Although if you look at the right street signs, you’ll still see the old name in use. It means even less now than it did then, though. The V&T stopped service to Minden in 1950.

Meyer’s Mercantile burned on January 31, 1926. The store and all its contents was reduced to ash, but the back half of the building containing the Dangberg offices was saved. A new steel building sits on the site now, trying to recapture the long lines of Meyer’s, but not quite pulling it off.

The flour mill operated until the 1960s, and in 1975 it was purchased by Bently along with all the other buildings in Minden’s old industrial neighborhood. The mill was listed on the National Register of Historic Places in 1978, but it has sat empty for four decades now. It’s slowly deteriorating in place, and it might be in trouble if there isn’t an effort to restore it soon.

Behind the flour mill is a building that wasn’t in the historic photo, it’s the Wool Warehouse that was built in 1916. It was recently restored and now houses office space.

And look at the picture close, right next to the lamppost. Even all these decades later, there’s still a Ford in the middle of the street.