The old firehouse on Curry Street is finally about to have its date with the wrecking ball. After years of being abandoned and “slated for demolition”, Crews are set to come in Monday to begin the task of taking it down. 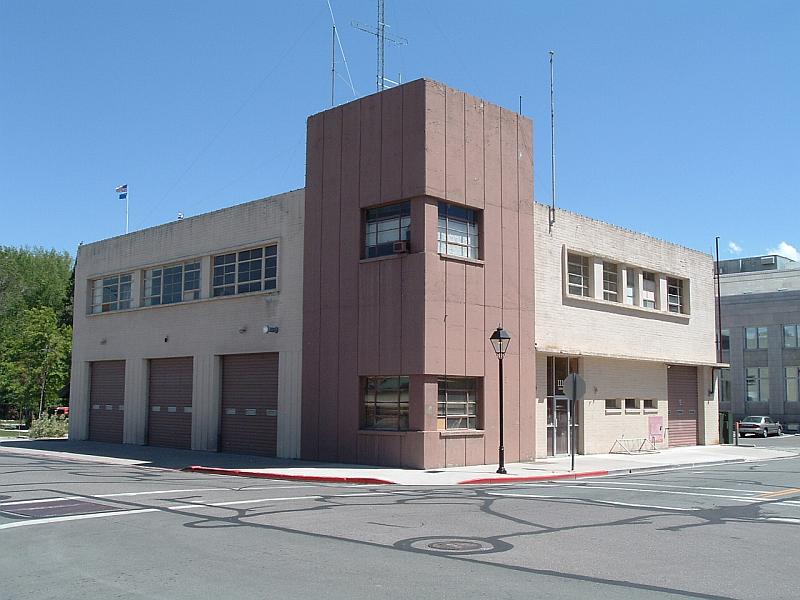 For decades this building, at the corner of Curry and Musser, one block from the Capitol building, was Carson City’s main fire station, home to the all-volunteer Warren Engine Company and later the Carson City Fire Department. This station was built in the 1950s when the Warrens outgrew the house right across the street. For 20 years it was the only fire station in town, until two more were built in the mid 70s. But this building remained the headquarters until the 1990s, when the CCFD outgrew its surroundings once again and moved to a brand-new station on Stewart Street, a couple of miles away. Ever since the move, the building has been empty. For a long time they’ve talked about tearing it down to provide more parking for the state offices in the capitol complex, particularly the Attorney General’s office right next door. But nothing’s ever been done about it, at least not until now. They finally stopped putting it off, and now the demolition is scheduled to start in just a couple of days.

And it’s not like it’s going to be a great loss to the city. This isn’t one of Carson’s grand historic buildings. It’s a cold war turkey, a concrete bunker in the middle of downtown. By contrast, the original Warren Company firehouse across the street is a wonderful sandstone structure that echoes the look of the Capitol building and Abe Curry’s house a few blocks away. I guess there’s something that could be said here about the decline of architecture during the mid-20th century. One is a historic treasure, and the other is a utilitarian building that has outlived its utility.

Not everyone agrees, of course. Just today in the Nevada Appeal they did a story on Darrin Berger, a Carson native who says the firehouse is historically signifigant and deserves to be saved. He has more than just a passing interest in the station, since his grandfather was a member of the Warren Engine Company and worked out of the station. But even Darrin concedes that it’s a little too late to stop the demolition now. He’s just upset that there wasn’t more of a movement to save it.

Personally, I’m ready to see it go. It’s not a terribly interesting building, and while it does have 50 years of history behind it, it spent nearly a quarter of that empty and unused. So it’s not a terribly useful building either. Some buildings are worth keeping around just for the sake of keeping them. Carson City certainly has its share of those. This firehouse, unfortunately, is not one of them.

But what do you think?

Bringing Down the Firehouse, Continued