There’s a bit of a fluff erupting in the Record Courier comments about the Matley Ranch. This ranch is about 60 acres of grazing land south of Gardnerville, at the intersection of Hwy 395 and Pinenut Road, across the street from the 7-11. The owner, Peri Enterprises, had requested a change to the master plan that would convert the Matley Ranch from agricultural land to commercial, with the obvious intent of building on the site. The town board approved this change unanimously, and that’s what got the commenters in an uproar. They’ve already been worked up by the news a few months ago that Wal-Mart is coming to Gardnerville, building on the Virginia Ranch just half a mile north. Their objections are that putting a Wal-Mart in the Carson Valley will ruin the rural character of life, as well as cannibalize business away from the local shops that line Hwy 395 through both Minden and Gardnerville. And now comes another announcement, just a short while later, of even more commercial development being planned for the same part of town. And all while the economy is in a slump and the commercial space we already have is sitting empty. So you can see why they’re upset. 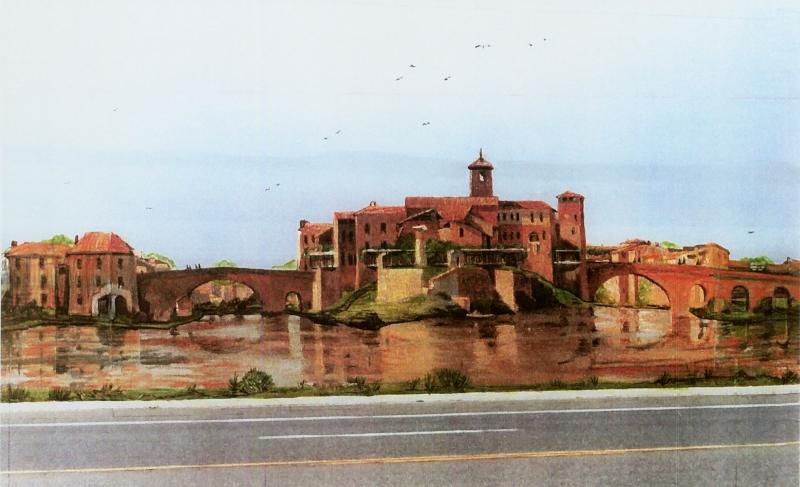 Although this is hardly the first time development has been proposed for the Matley Ranch. Nearly 10 years ago Peri Enterprises put forth plans for a big hotel-casino on this land, called the Villa Resort. The casino would have been patterned after a Mediterranean village, and featured a large lake fronting the highway. The casino was going to be built so that it appeared to be perched on several small islands in the lagoon, with sweeping stone arches connecting the different parts. There would also have been several acres of RV park located behind the casino. It was a striking plan, one that has stuck with me as being terribly inventive as well as terribly out-of-place in the Carson Valley. But the project fell though, just as so many hotel-casino projects planned for the Carson Valley have died.

Developers never quit, though, and now Peri Enterprises is back looking at “commercial” use for the Matley Ranch, most likely retail and office space. Maybe they’ll stick with it this time, maybe it will fall apart like the Villa Resort, which never got off the ground, or the Minden Gateway, which never got above the ground. But I doubt that a few comments on the Record Courier’s website will sway things much in one direction or another. Personally I don’t have any particular problem with development on the Matley Ranch, since Gardnerville is going to keep growing and there’s no use fighting it. That south stretch of highway is the best direction to grow in. But I don’t think now is the best time for them to be developing a retail center, considering the failure of the Minden Gateway, the failure of the retail center across the street from Raley’s to attract tenants, and the slump that all of Western Nevada is going through right now. It’s good to bet on the future, but not too much. This project might be too much right now.