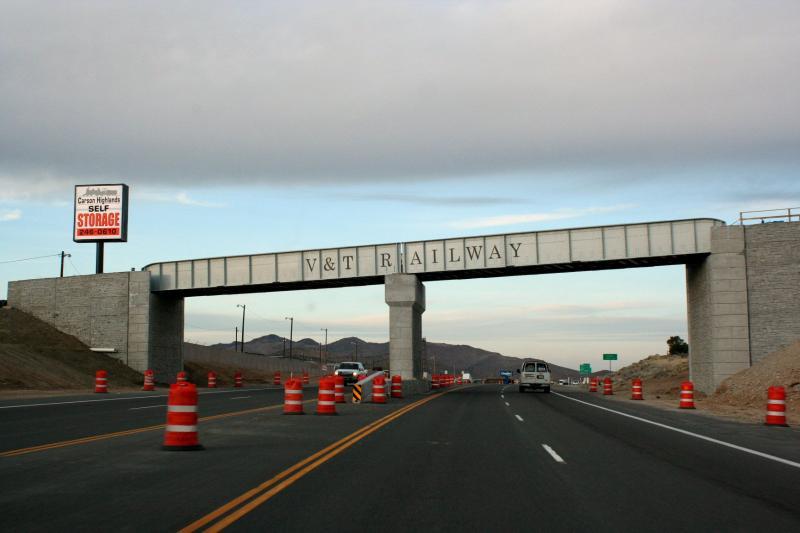 Now the news is coming out that the Virginia & Truckee Railway, the one being built by a state commission between Gold Hill and Carson City, might change their name. This story just keeps getting worse and worse. Let’s try to sort it out.

The train that runs in Virginia City today is called the V&T Railroad, and from a legal standpoint it is a direct continuation of the original V&T that ran from 1869 to 1950. After the line was abandoned, the name and trademarks and other essential bits of the corporation were maintained in one piece by a group of railfans, and when Bob Gray rebuilt the line in 1976 he bought that phantom “company” so he could be fully legal. His family has been running the train for over 30 years, expanding the tracks until they reached Gold Hill.

The idea of expanding the railroad all the way to Carson City was kicked around almost from the time the first rails were laid, but the Grays never had enough money to do it. So enter the State of Nevada, who decided to buy the land and lay the rails themselves. It took them two decades to do it, but over the last five years they’ve actually been constructing the line and now have it built as far the Carson City border, on the edge of Mound House. They of course want to capitalize on the “Virginia & Truckee” name, but because the Grays own the Railroad name, the Commission has had to call themselves the V&T Railway. There are some who argue that even that infringes on the Gray’s trademarks.

So now the Commission is looking at the possibility of changing the name of their railroad to something else to avoid the confusion and the legal issues. Never mind that this whole project was supposed to pay tribute to the historical railroad of old. Now they want to dump the name all together for something lame like “Carson & Virginia City Railroad”. Which actually is similar to one of the earliest proposed names for the railroad, back in the 1860s. But to change the name is to throw away all associations with the history of the line, and I think it would be death for a project that is already on shaky ground.

I’ve said before that I don’t see any easy solution for this whole mess. The second the State got involved, and public money was put into it, it became a no-win situation. Of course the whole line, from Carson to Virginia, should be owned and operated by one single entity. Having two parties fight over who gets to run whose trains on which tracks is a road to disaster. But from where we are now, how do we get to that point? The Commission can’t just turn over the tracks to the V&T Railroad, that would be a gift of public property to a private corporation, which not only probably breaks several laws but also would send up howls from the public. The Grays can’t buy the Commission’s tracks and land; they don’t have the money or else they would have done the project themselves. And the third option, for the State to take the Grays’ operation by eminent domain and drive them out of town, turns my stomach to even think about it.

It’s too bad; this reconstruction was supposed to be done in the positive spirit of keeping history alive and creating a fun tourist attraction for the area. But it’s gotten so weighed down with politics and bullshit that the whole thing is tarnished, possibly beyond repair. Next month will see the first trains running the whole length of completed track, for the price of $48 per head (marked down from a proposed $100). This should be an exciting time. We should be jubilant that we survived to see it happen in our lifetimes. But now there’s a sour taste about the whole project. Will the enthusiasm really be there, and will the riders really turn up?