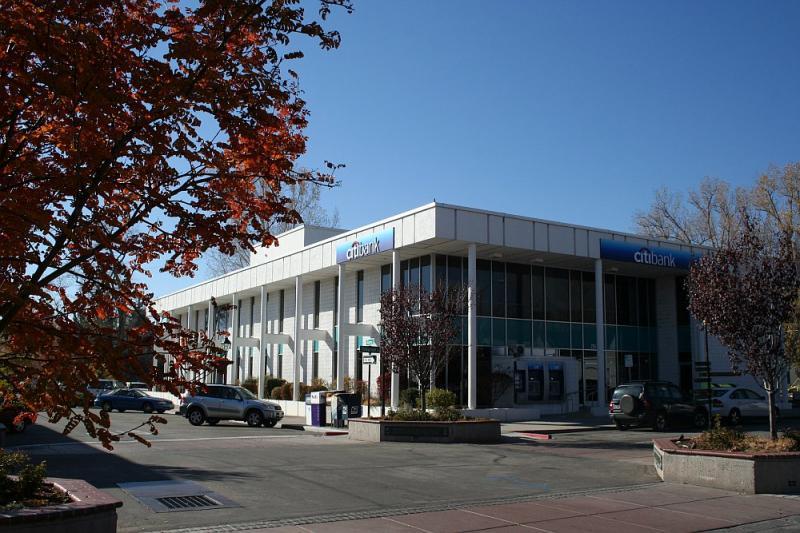 The news is floating around that the Citibank building at Telegraph Square, one of the big boxy eyesores in downtown Carson, is going to be sold off soon. Wells Fargo is taking over Citibank’s operations in Northern Nevada, and this building is part of the deal. Since there’s already a Well Fargo branch nearby, they’ll be shuttering this one. And since they’ll no longer need the building, that means they’ll get rid of it by selling it.

So this is where the opportunities come in. Telegraph Square, and all of what is being called the “Curry Street Promenade“, has been seeing a lot of redevelopment lately, and a large parcel like this coming up for sale is exciting because there are so many possible uses for it. The consensus in the article seems to be that it needs to be torn down just because it’s so ugly, and I can’t say I disagree with that. But then what do you build on the site? Housing and retail seem to be the top two choices, or more likely some mix of the two. I could also see a parking garage going on this site, with retail shops facing the street on the ground floor.

Or the building could be remodeled. There’s a basic structure here that serve as a good base for transforming it into something architecturally exciting. The building as it is now could be reconfigured to have retail on the ground floor and housing or offices above, maybe with an addition in the back. The look of it could be updated to something that fits more with the character of the neighborhood, and it could be a real part of Telegraph Square instead of the big boxy obstacle that it is now.

The kicker, though, is that it’s not up to us. As with all of these redevelopment projects, there would have to be a developer with vision that came in and bought the building, and was willing to take a risk on downtown. The most likely outcome is that whoever buys it will keep it mostly the same, and lease out the space as offices, most of which will sit vacant. If it sells at all.

It’s easy to be pessimistic, but things like the Firkin and Fox give me hope. What do you think will happen with the Citibank building?