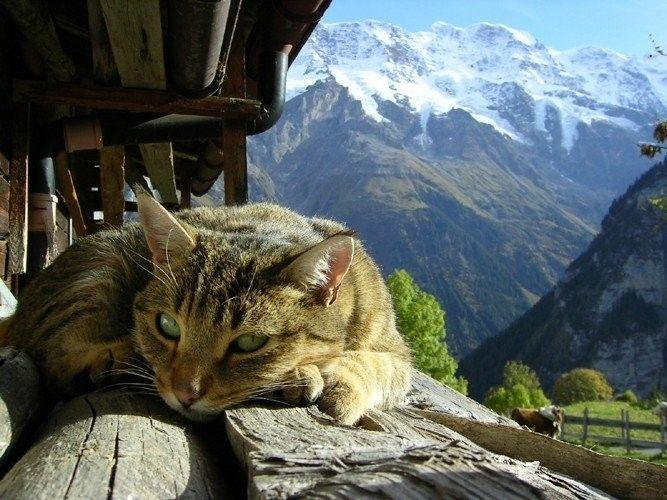 Excerpt from “Little Sheaves” Gathered While Gleaning After Reapers (1874), by Caroline M. Churchill.

There is living in Carson City a famous old cat who is generally known by the significant cognomen “Stump.” This name was given him because of a shortcoming of the caudal appendage. Stump has also “bob ears.” It is a matter of wonder to me why he is not called by the latter instead of the former name.

This feline is an old resident of Carson, having lived in the place for the last fifteen years. He is an immense creature. When I first saw him I thought he must belong to the wild cat family. I am told, however, that he is perfectly peaceable in disposition, and that the scratches upon his nose are only the results of exchanging love taps with his neighbors.

I came to the conclusion that his offspring were numerous, from the strong family resemblance to be detected in many of the young felines in the neighborhood.

Stump does very little for the family, I assure you; he is like many men in this respect–so afraid that he might do something for the children of other cats that he will do nothing for his own. The younger felines may thank the superior industry and diligence of the mother cat, who is generally equal to the task of rearing her offspring, without assistance from relatives.

I realize that cats have always been terribly misrepresented and slandered; but I am speaking only the truth when I say that Stump frequents all the most popular saloons in the vicinity. He may frequently be seen serenely sitting on a beer keg or counter, looking as if he did not care whether school kept or not.

Dogs have few rights or privileges which Stump feels bound to respect. If one happens by on his way from the meat market, Stump will pounce upon him and speedily relieve him of all further responsibility of marketing. Stump is recognized as one of the first settlers, is a member of the society of “Old Prospectors,” and is treated with the acknowledged deference due an aged bummer. He puts up, for the present, at the “Old Globe Saloon.”

We are now called upon to record the death of this most worthy creature who was endeared to the sympathizing hearts of this community by the mutual associations of a long and eventful life.

About fifteen years ago this cat was found by a townsman, in a half-starved condition, just as he had been dropped down from the moon or some unknown planet, after the obscure manner of cats. He was “taken in,” fed and cared for in a way characteristic of the inhabitants of Carson City; the results were, that in a short time he became able to hunt for himself, and in so doing, to contribute his share of general blessings to the community by keeping rats, mice, small birds, all vermin and dogs within the limited sphere allotted them by nature.

As Stump leaves behind him many living friends and relations, it may be well to mention some of his faults as well as his many virtues.

Misfortune, adventure, disappointment and sorrow is the common lot of all creatures; most especially did this fall true to the early Carson residents, and Stump shared the common adversities and peculiar social reverses of many an early settler.

His associations were not always what they might have been. He spent his last days in a saloon. His last rest was upon a beer keg. It was a sad, although somewhat interesting sight to see Stump, with other invalids, taking his daily sun bath in the door of his favorite resort.

He seemed to have an intuitive knowledge of the common laws of health, and although a frequenter of doubtful places, was known to be perfectly temperate in his habits. Stump’s early love-life, like that of most of the old settlers, has been one of many perils and hairbreadth escapes. The scars resulting from these adventures he carried to his last resting place. He was somewhat addicted to profanity, and would roll out terrible oaths, as cats are wont to do when vexed by the green-eyed monster, jealousy.

Notwithstanding his faults (and who has them not?) he played well his part in life, and departed, having the love and toleration of the entire community. On the 6th of April Stump took an informal leave of his old “stamping” ground; he was found dead by a man who frequented the “Old Globe”.

When poor old Stump was stiff and cold,
Alas! said he, poor Stump was very old.
Jack may have thought, but nothing more he said;
Just raised his hat and scratched his head,
Drew off his boots and went to bed.