I was sifting through some old papers at my house the other day when I unearthed this. Now, to most people this just looks like a tattered piece of trash, and they wouldn’t hesitate to throw it away. But as soon as I saw it I remembered just what it was, and the story of how I got it.

This, obviously, is a $2 food credit voucher for the Money Tree casino. It’s pretty beat up, but that’s because it’s almost as old as I am. The Money Tree was in downtown Reno, a spin-off of the Mapes Hotel and Casino, just a couple of blocks away down by the river. Originally the Money Tree occupied a small space on the west side of Virginia Street, near the arch. It was opened in 1969 to bring in some extra money to the Mapes family, and it did very well at that. So well, in fact, that in 1978 the Money Tree moved to a larger building at the corner of Second and Sierra Streets, at the same time business at the Mapes was declining. The new Money Tree was actually part of the big Reno casino boom of 1978, which saw the MGM Grand (now Grand Sierra), the Comstock (now Riverwalk Towers) the Sahara Reno (Formerly Golden Phoenix, now being converted to the Montage condos), Circus Circus and the Money Tree all open within a few weeks of each other. The Sahara, Circus Circus and Money Tree actually all opened on the same night, July 1, 1978, and all of downtown celebrated with a star-studded floating party. On the same night word came that Bill Harrah, who had pioneered the idea of the modern casino and first put Reno on the map, had died. So in a way it was the passing of the old guard to the new, a new generation of downtown casinos being born all at the same time. 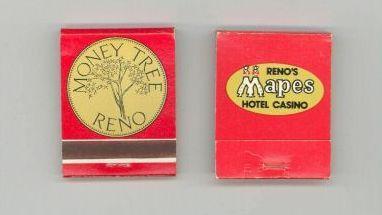 Now, of course, that generation has been wiped out and another, even newer, guard has taken over. Out of those five properties in the big casino boom of 1978, only Circus Circus still operates under its original name. The Comstock and Sahara have given over to the latest boom, the Reno condo craze. The MGM has gone through several owners and name changes: Bally’s, Hilton, and now Grand Sierra Resort. But it was the little Money Tree, the property that was supposed to save the Mapes, that had the fastest flameout. The casino ended up being a drag on the parent company’s bottom line, because it didn’t have parking or hotel rooms like the other new properties, and the 1981 recession was the final nail. Both the Mapes and the Money Tree closed in 1982. The Mapes was demolished 18 years later, and the Money Tree’s location has gone through several tenants. There was Eddie’s Fabulous 50’s, where you could find jukeboxes and poodle skirts and Elvis impersonators (and, for a short time, a DeLorean. I never understood how that fit the theme). Then, during the late 90s, the building was opened as the Reno Live dance club. Most recently it’s been transformed into the 210 North nightclub.

As for the food credit vouchers, the way I heard the story was that near the end, the company was doing so bad financially that they were handing these vouchers out to the employees in lieu of pay. I don’t know if that’s entirely true, but it sure makes for a good story.

And what about my lonely voucher in particular, and why it’s so beat up? I actually found this scrap of paper lying on the street on a cold January morning back in 2000, the day the Mapes was demolished. For 18 years the voucher must have sat in one of the rooms, a forgotten piece of trash in a condemned building. The violence of the blast that day expelled it out an open window during the Mapes’ final seconds, sending it fluttering down to the street in safety. So it may be small, but this food credit voucher to me is a souvenir of the Mapes, the demolition, and of Old Reno itself.