Dug’s West Indies Then and Now 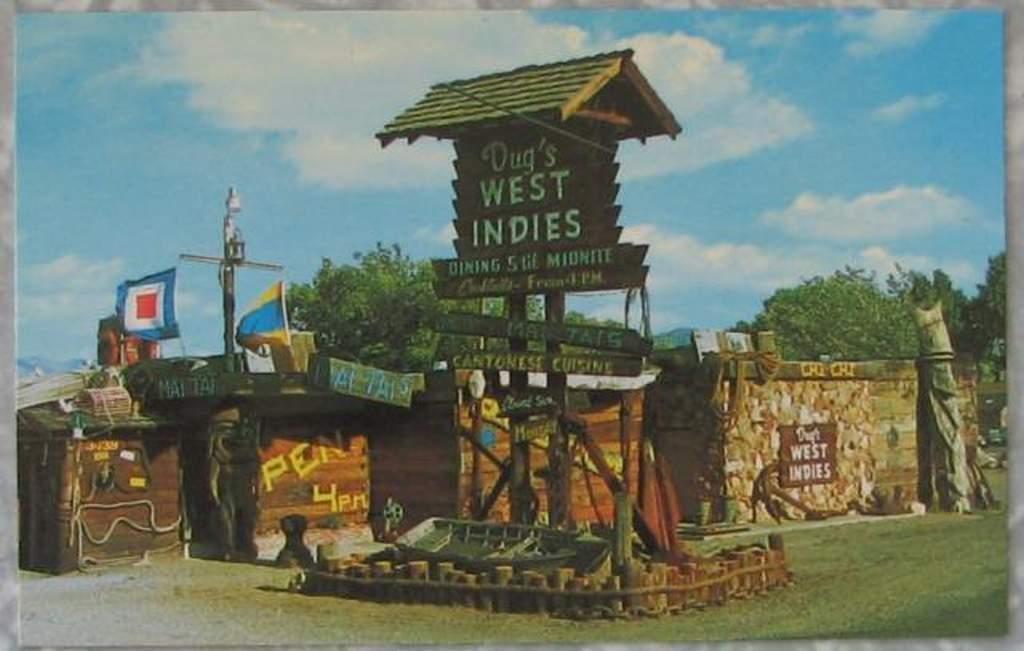 One of the more colorful places in Carson City’s history was a little restaurant and bar named Dug’s West Indies. It was located way at the northern edge of town, a little ways before the highway started climbing to the Washoe Valley. It was run by a fellow named Captain Dug Picking, who from all accounts was quite a character. A former Merchant Marine, Captain Dug found himself landlocked in Carson City and established a genuine Tiki bar serving Polynesian food and colorful drinks. The restaurant was decorated with tikis and sailing paraphernalia: fishing nets, ropes, anchors, nautical flags, seashells. It boasted a “Shark-Infested Men’s Room.” 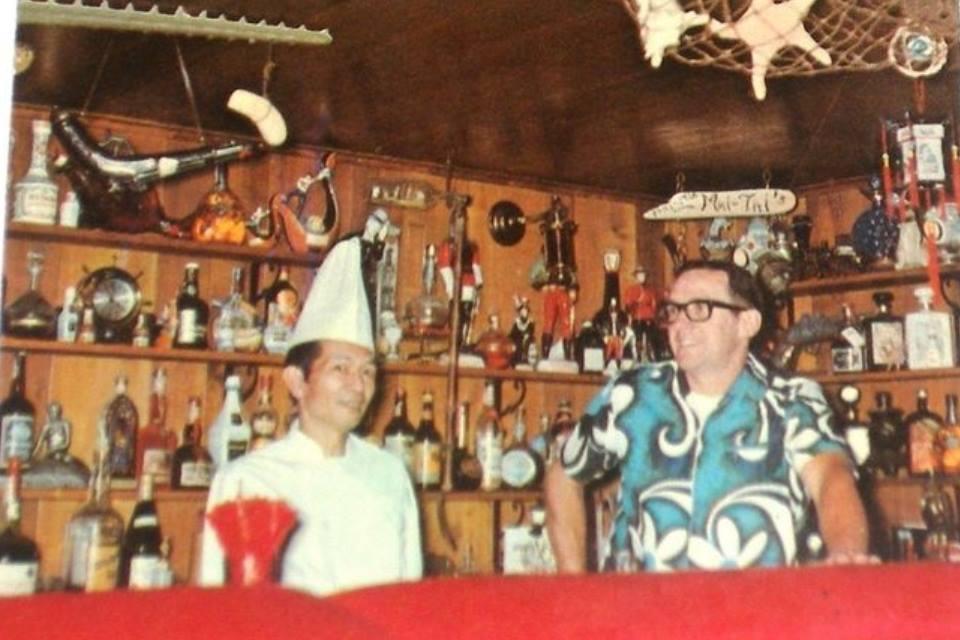 Most everything I have been able to find about Captain Dug comes from a thread on the Tiki Central website and a Record Courier article talking about Dug’s other endeavor, the never-realized Windjammer casino. One of the posts in the thread is from an employee at the West Indies, describing Dug’s character.

He loved telling stories to the clientele, and I remember them bellying-up to the bar just to hear a good story. I never heard him repeat one. He did have a little fun with the tipsy, “know-it-all” clientele: he kept a bridge compass near the middle of the bar area and a nautical map behind the counter. He would bait and bet the uninitiated by telling him that Carson City was farther West than Los Angeles. (He explained to me later that, since Los Angeles is actually on the Pacific and Carson City is east of the Sierras, we create a spatial error. I know. I did it too!) After a few flabbergasting moments, out would come that map and the incredulous client would have to buy rounds or some such.

My experience with Dug was that his personality set the mood of the entire restaurant. He was equally cheerful with a restaurant full on a Summer’s evening or on a sparse, snow-jammed Winter night. This may sound like a gush, but who would deny Dug a little hero-worship?

He said that he and Victor Bergeron went “way back,” and told ever-growing, ever more embellished stories of their years of carousing and drinking their way around the Pacific Rim, and how he got the best of Victor sometimes and sometimes not.

I got to watch Dug earning his fame with his “Blue Mai Tai,” from-scratch Pina Coladas, grogs and flourish drinks (he cheerfully did five and seven-layered Pousse cafes on-demand.) He didn’t water-down or scrimp on anything for the guests. Nothing in the place was inexpensive, and, conversely, nothing was cheap. …except for the endless tape loop of Hawaiian music that he had wafting through the place every night.

Dug also created a series of liquor decanters themed after Nevada brothels. These decanters have turned out to be very popular with collectors. A selection of the decanters can be seen below, and the full collection can be found at www.dugsdecanters.com. An article from 2007 about one of these collectors fills in a little more of Captain Dug’s story.

The decanters were made from 1976 to 2000 by Dug Picking, a sailor turned Nevada restaurateur. Picking was born in Estonia, but began traveling the world on the high seas at a young age. In 1954, Picking settled in Nevada, where he worked in restaurants, bars and casinos. In the late 1960s, he opened his own place, Dug’s West Indies in Carson City, specializing in Polynesian Chinese cuisine.

His first two decanters, made in 1974 and 1975, featured nautical themes and were sold at his restaurant. The following year, the owner of the nearby Moonlight Ranch brothel asked him to make one for the ranch.

The decanters were so popular, other brothels began asking to have their establishments immortalized by Captain Dug. He eventually made 47 brothel decanters and a few unrelated bottles. The numbers produced, however, were small. Some had as a few as 700; others as many as 1,500.

The designs and the limited numbers have combined to make the decanters rare and, in recent months, extremely valuable. A bottle in mint condition recently sold for $700. 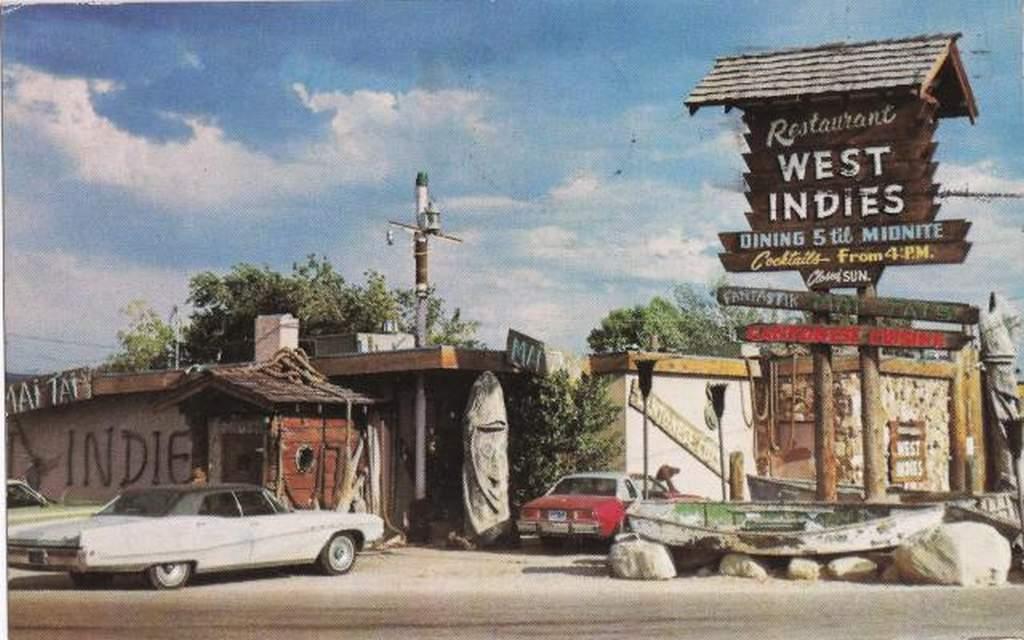 Around the late 70s/early 80s Captain Dug ran into financial trouble caused by the failure of his Windjammer project. He sold the West Indies to new management and left town. This picture shows the restaurant after Dug’s name had been scrubbed from the sign. By all accounts, the restaurant went downhill after Dug left.

I’m not sure how much longer the West Indies remained open. By the 1980s that area was no longer “way out of town”. In the 1990s the dusty side road next to the West Indies was expanded and renamed College Parkway. A brand new Super Kmart was built across the street. But the West Indies did not survive to see any of that. A survey of aerial photos of that part of town tells the story of the southeast corner of College Parkway and North Carson Street. In 1990 the West Indies building was still there. In 1994 it was an empty lot. And by 1999 something new was on that corner.

The “something new” was Carson City’s brand-new state-of-the-art Burger King restaurant. For 20 years now this corner has been the home of the Whopper, rather than the home of the Blue Mai Tai. And the charm and character of Carson City is a little poorer because of it.

The Origins of Dug’s Windjammer