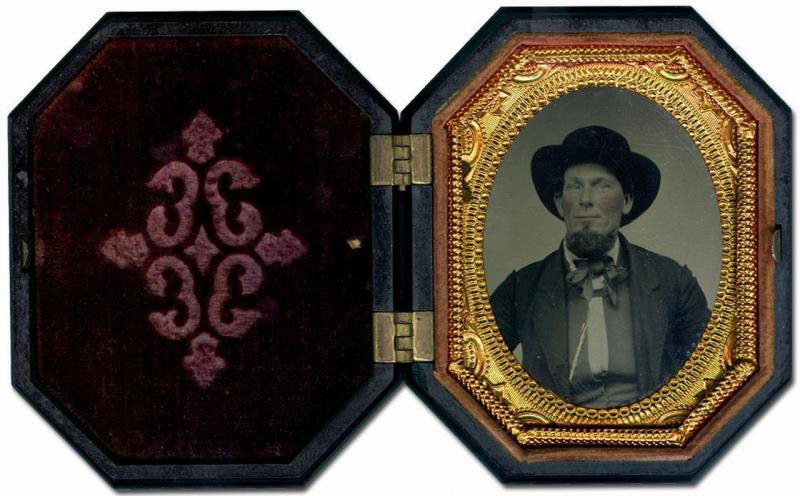 News Release: Probable image of Henry Comstock surfaces 150 years after one of greatest gold and silver strikes in history

Comstock gave his name to the Comstock Lode , one of the greatest gold and silver strikes in history, discovered in June 1859. The mining district included Virginia City, which became famous for its wealth and cutting-edge technology.

Bohn acquired the photograph at an antiques show in Palmer, Massachusetts on May 10, 2009 from a seller who claimed the image depicted Comstock and that it came from an estate sale in Maine . The dealer also alleged that a document associated with the photograph described the discovery of the Comstock Lode , but that it had already been sold separately. Analysis of the image identifies several similarities to the only positively identified photograph of Comstock.

“Henry Comstock in one of the more important characters in the history of Western mining,” said state historic preservation officer Ron James and author of “The Roar and the Silence: A History of Virginia City and the Comstock Lode” (1998). “The discovery of a photograph that might depict him is exciting news and is of considerable importance to the entire nation.”

The image of Comstock is a tintype, which was a form of photography popular from the mid 1850s until the end of the nineteenth century. The only positively identified image of Henry Comstock is grainy and difficult to evaluate, but certain similarities are obvious.

“Initial analysis of the image indicates there is a strong resemblance between the verified image of Comstock and this new discovery,” said Bohn. “Using rudimentary tools for facial comparison, it is possible to determine that the general shape of the two faces and the shape of the nose match. In addition, similarities in clothing and the appearance of the beard reinforce the idea that this new photograph depicts Comstock.” Bohn provides a detailed analysis of the photograph on his website.

Henry Tompkins Paige Comstock earned a reputation in the West for being fast-talking and uninterested in serious work. He was nicknamed “Pancake” because people said he was unwilling to take the effort to make bread and instead simply turned his flour into easily-prepared pancakes.

On June 8, 1859, Comstock happened upon Patrick McLaughlin and Peter O’Riley, two Irish immigrants, who had found a profitable outcropping of gold ore on the slope of a mountain in what would become western Nevada . Comstock insisted they were working on land he owned, and so the two prospectors included him and another man as co-claimants. Within a few weeks, an assay of the ore demonstrated that the discovery included a fabulous amount of gold and silver.

Hundreds of people quickly arrived to stake claims and mine in the district. After extracting gold and silver through the summer, Comstock, like most of the first claimants, sold his interest for several thousands of dollars, presuming that he had already extracted the richest part of the ore body. What no one understood at the time was that the Comstock Lode would produce today’s equivalent of several billion dollars in precious metals over the follow twenty years.

Comstock eventually left his mining district, always searching for the next big strike. Some claimed that he went insane, perhaps plagued by having lost the enormous fortune of his claim. Others insisted he always lacked a firm grasp on reality. For whatever reason, Comstock fatally shot himself in 1870 while living in Montana .

“We hope that by announcing this discovery, additional information may be forthcoming,” said James. “Details about the document associated with this image would be extremely helpful, and the assistance of photographic experts who could confirm that this is indeed Comstock would be welcomed. If this is, in fact, Henry Comstock, we are able, for the first time, to see a clear image of a man who shaped industrial history and was known throughout the nation.”

Virginia City and the Comstock Lode remained household names until the mines began to fail in the 1880s. The National Broadcasting Company renewed the fame of the mining district with the television show Bonanza, which premiered in 1959, fifty years ago as part of the centennial celebration of Comstock’s discovery. One of the first episodes featured Henry Comstock and the initial strike.

The beginnings of the Comstock

Chronicles of the Comstock

Chronicles of the Comstock

Charachters of the Comstock