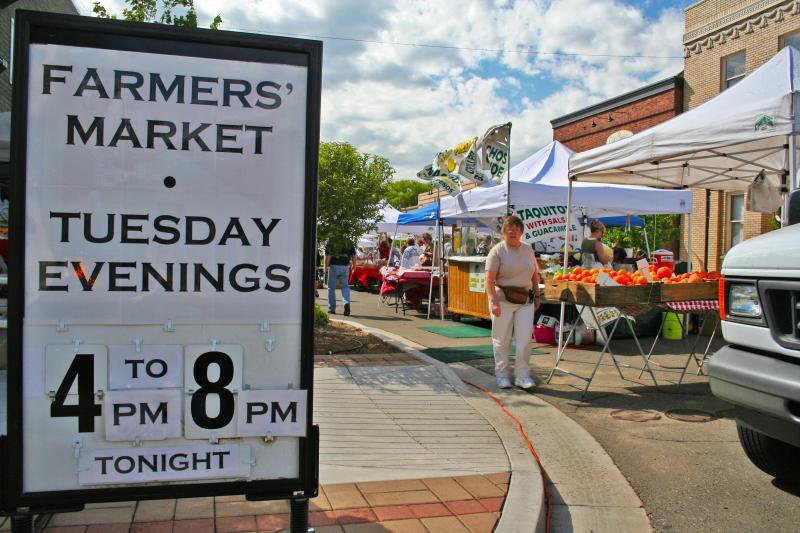 This afternoon we found ourselves down in the Carson Valley in the late afternoon, and we remembered that Tuesdays are when the new Minden Farmer’s Market is taking place. So we made the detour onto Esmeralda Street to check it out. And you know, it’s not a huge affair. The street is roped off for one block, between 4th and 5th Streets, and there are several tents and booths set up. Since it’s a farmer’s market, you’d expect to see a lot of fruit and vegetables being sold, but in reality there were only about three or four kiosks offering those goods. And all of those were freshly trucked in from California, not locally grown. The quality still beat what you get in the supermarket, though. These strawberries, in particular, were like nectar from the gods. Another booth was selling apricots, peaches, and pluots. And while they were still certainly miles beyond the produce you can normally buy around here, they still fell short compared to the strawberries. Oh well. Not everyone can be number one. The rest of the booths were selling various arts and crafts, baked goods, flowers, and prepared foods like bratwurst and taquitos. It’s not a huge farmer’s market by any means, and I’m pretty sure I could count the number of actual farmers in attendance on one hand. But it’s a good showing for a small town like Minden, and even though it was a windy and chilly afternoon, there was still a good turnout. So if you ever find yourself in Minden on a Tuesday, like we did, it might be worth your time to set aside twenty minutes and stop by. And be sure to grab the strawberries. Also, remember that this coming Friday is the first Concert in Minden Park for the 2007 season. This first performance is by Hotel California, an Eagles tribute band, but even if you’re not into the classic sounds of Don Henley and the boys the concerts are still a great place to have a picnic, kick back under the trees, and do some people-watching. See you there?