Nye Building Then and Now 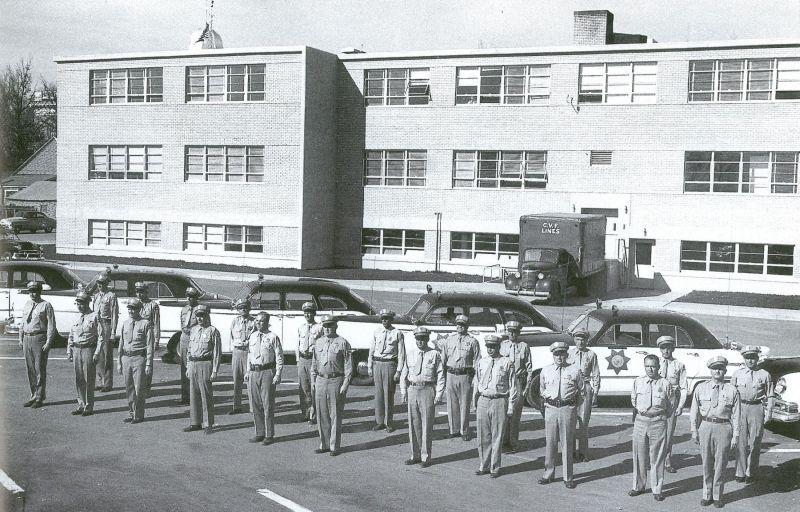 I don’t know much about the Nye building. I only have a couple of photographs, enough to know that it was located at the northwest corner of Fourth and Stewart Streets, and that it was a typical post-war government building: square, low to the ground, non-descript. It has that atomic age bunker look, like it was intentionally designed to make you look in the opposite direction. Almost like they didn’t want to waste their energy on architecture if the Russians were going to get us anyway. You can see this same lack of taste in the Blasdel Building a couple of blocks away.

A number of state agencies had their offices in the Nye Building, and one of them probably was the Nevada Highway Patrol. This picture here shows the officers of the highway patrol, which was formed just two years previous, lining up for a photo on Nevada Day, 1951. Their shiny patrol cars are lined up behind them.

This fairly large force shows how far the Highway Patrol had come in just a couple of decades. The first patrolman was hired in 1923, one person that was in charge of patrolling the entire state(!) By 1934, there were three officers, one each for Carson City, Reno and Las Vegas. Three very busy officers, I would imagine. Back then the highway officers worked for the Nevada highway department (today’s NDOT), under the supervision of the state police. But in 1949 the state police department was done away with and the Highway Patrol formed to enforce the state’s traffic laws. (History of the NHP)

And two years later there were at least twenty-two officers who were able to make it to Carson City for a picture. I’d like to think that there were are least a few more stationed in Las Vegas who didn’t take time off for a photo op.

Here’s another photo of the Nye Building, take from the air later in the 50s: 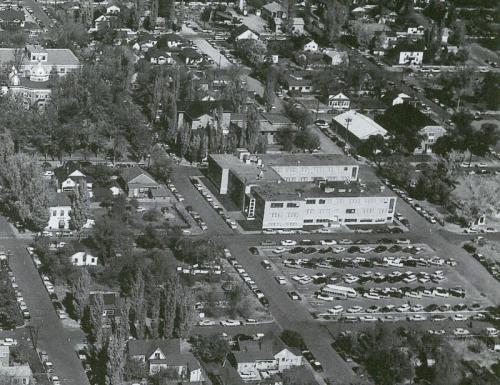 The Nye Building dominates this picture, along with its huge parking lot. The Nye Building was demolished in 1990 to make way for the new Nevada Supreme Court building. It’s not a big loss, really, as the Supreme Court is a return to more classical forms of architecture, and is a more fitting inhabitant of the Capitol Plaza.

In 1951 the Capitol Plaza took up only four blocks at the center of Carson City, with a couple of other state buildings scattered around on neighboring streets. But these days many of those streets have been ripped out, and the Capitol Plaza covers an impenetrable 15-block area between Musser and Fifth, and Carson and Stewart in the heart of town. All the houses, shops, hotels, and other structures that had been inside those boundaries have been demolished, just like the Nye Building. The only ones that survived were the State Printing Office, which was incorporated in the the new state library, and the aforementioned Blasdel Building. The Capitol Plaza now is home to the Capitol Building (of course), the State Library, Nevada Legislature and, exactly on the site where the Nye Building used to stand, the Supreme Court.

The “now” view was taken from the top of the parking garage that sits at the corner of the plaza, where the original photo was taken from a ladder or something in the parking lot. It looks down on what used to be Third Street, but is now an access road going underground. Right there, where the road disappears into the darkness, is roughly the spot where all those patrolmen lined up 55 years ago. And rising up behind it is the much improved, and more imposing, ediface of the Supreme Court. Unlike some other buildings which were lamented after they were gone, like the Children’s Home or the V & T shops, nobody misses the Nye Building. You know, I lived in Carson City for five years before the Nye Building was torn down, and I don’t even remember it. At all. Even when I saw this picture I was sure it must have been torn down before I moved here, because it was just that forgettable. Architecture is supposed to inspire us, not make us fall asleep and forget that it existed.

So, there have been a lot of regrettable losses to Carson City’s architectural scene over the decades, but the Nye Building is not one of them. Good riddance. Now if only they’d tear down Blasdel too.

And the Nevada Highway Patrol? That small force of twenty-two has grown to over 350 officers, responsible for thousands of miles of Nevada’s highways. Their headquarters has moved a few blocks south, to a complex on Stewart Street that they share with the DMV.

And they no longer drive those cool cars.