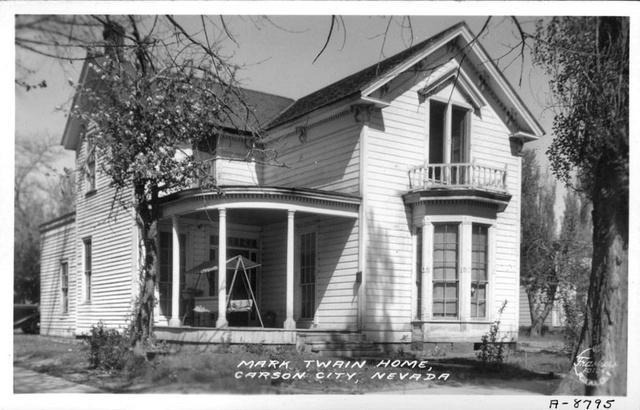 Most cities in the U.S. have some kind of brush with celebrity that they like to promote. It seems every little inn in New England claims that “George Washington Slept Here!” Some cities have tours of movie filming locations, and places where the stars ate, and of course Hollywood is built on the exciting promise that you might see a star while you’re visiting.

Carson City’s claims to celebrity are a bit more modest, yet still attached to a name that most of you have heard of. Writer Mark Twain spent a few years in the Carson and Virginia areas, when he was still going by the name Samuel Clemens. He came west with his brother, Orion Clemens, who had been named Territorial Secretary of Nevada, right-hand man to Territorial Governor Nye. For three years Orion held this post and lived in this house, at the corner of Spear and Division. His brother Sam, who fell in and out of employment as a miner and newspaper writer, often crashed here and accompanied him to state functions around town.

After statehood in 1864, both brothers left town, Orion to a life of obscurity back East, and Sam, now known as Mark Twain, to life as one of the most celebrated authors of the 19th century. In the 145 years since, the house has been through several owners and a few renovations, but still remains largely the same on the outside. It is now home to an attorney’s office. And it’s still one of the few places in Carson that could hang up a sign saying “Mark Twain Slept here”.

New Then And Now Article

Virginia & Truckee is back from the dead, and it?s awesome