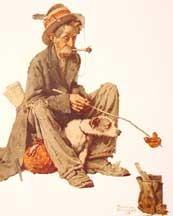 A new poll reveals that a vast majority of the nation’s bums will vote for the presidential candidate who promises them the most change.
“I keep hearing this election is about change,” said Tuberculosis Einstein, a veteran Nevada panhandler occasionally seen outside a 7-Eleven in Arkansas, Virginia, Massachusetts, Florida, Delaware and North Dakota.
“I need change. Everybody I know needs change,” added Gimme Two-Bits, a longtime collector of both vintage and modern coins.
“I been looking for change every day ? for as long as I can remember,” said Dunno Alzheimer, who boasted that he hadn’t changed his clothes in 41 years.
“Them Democrats mentioned ?change’ 103 times at a debate in New Hampshire. That’s a good sign,” said Gangrene Willie, an undecided vagabond who slept under a Clinton sign last night but plans to back Huckabee in South Carolina, then catch a westbound boxcar to vote Obama in Alabama.
Polls show many street-level tramps are concerned about health care. But not Wheezy Marlboro or Bloodclots Washington. They just want change.
And some bums say they are troubled by the slumping cardboard housing market. Not Subprime Morty. His #1 issue is change.
Two-Nickels Roosevelt confided that he, too, is passionate about change.
“I’m serious,” he gasped. “Please give me some dang change.”
Pundits say the hobo demographic will be vital to the 2008 election ? widespread talk of change will draw record numbers of bums to the polls, causing presidential candidates to pander to the panhandlers.