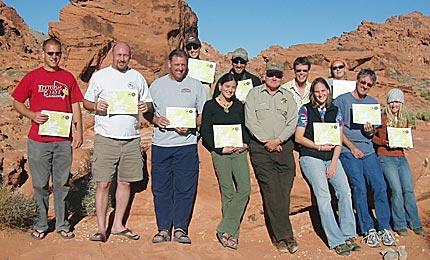 CARSON CITY, Nev.ï¿½The eyes of committed conservationists see no difference between the front country and the backcountry.

A longstanding effort to increase environmental awareness has been to teach backcountry outdoor ethics. Specifically, the creed has been to “leave no trace” in remote areas.

The problem: Most visitors visit the front countryï¿½urban parks, established campgrounds, open space trails and the like. This is according Allen Newberry, chief of operations and maintenance for the Nevada Division of State Parks.

Newberry has been involved with the Leave No Trace program, which originated with the U.S. Forest Service in the 1960s, since the early 1970s, when he taught outdoor ethics to Boy Scouts at Valley of Fire State Park in Southern Nevada.

“The goal was to become better outdoor scouters,” Newberry says. “Leave it clean and leave it better. We want to promote wise conservation of the outdoors. Really what we’re trying to do is to teach people to make the right decision for the right reason.”

Newberry’s commitment took him to the national stage recently, where he was involved in spreading Leave No Trace principles. He was instrumental in formalizing an agreement with the National Association of State Parks Directors, composed of the leaders of America’s fifty state park systems and Puerto Rico, and the nonprofit Leave No Trace Center for Outdoor Ethics.

The agreement is intended to engage state parks around the country with Leave No Trace on-site educational programs. The partnership will work to expose millions of park users to environmental messages and give them minimum impact skills as well as make available new training resources for state park employees.

“My involvement was working on a national committee to develop a partnership between the Center for Outdoor Ethics and state park directors, particularly for the front country, which is where most of our visitation occurs in Nevada’s state parks,” Newberry explains. He sat on the educational review committee to help develop Leave No Trace’s front country program.

And he remains committed to teaching the on-the-ground principles. Newberry recently helped teach a Leave No Trace master education class at Valley of Fire. His motivation is simple: “I’ve always liked the outdoors and I want my children and grandchildren to enjoy the outdoors too.”

For information on Leave No Trace, visit www.lnt.org.

The seven basic principles of Leave No Trace
1. Plan ahead and prepare
2. Travel and camp on durable surfaces
3. Dispose of waste properly
4. Leave what you find
5. Minimize campfire impacts
6. Respect wildlife
7. Be considerate of other visitors